Indonesia’s long-standing practice of bribery has lingered over the decades. It is a serious problem; one which truly hampers business and investments.

Indonesia is a hot market for any foreign investor. According to global management and consulting firm McKinsey and Co, the nation’s economy is set to surpass those of the UK and countries in Europe by 2030. By that time, there will be 135 million Indonesians in the consuming middle-class and US$1.8 trillion worth of market opportunities in consumer services, agriculture and fisheries, natural resources, and education.

But before investors race to put their money into the archipelago, there’s a serious road bump to look out for: corruption in the Indonesian government. For those of you who are new to this country, while Indonesia is a market with huge potential, the archipelago has a long-standing tradition of bribery and graft. It’s a real problem, and the negative effects can be readily observed in the way local businesses operate, as well as what is considered commonplace in Indonesia’s investment world. Corruption is also hurting foreign investment in Indonesia, according to a 2012 report by Standard and Poor’s. 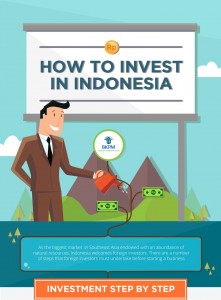 According to a Corruption Perception Index created last year by global anti-corruption organization Transparency International, Indonesia sits at the low rank of 107th out of 175 nations. The report indicates how corrupt a nation is by pulling data from surveys given to businesses. Indonesia Corruption Watch (ICW) estimates that the nation lost US$238.6 million in 2011 alone due to government corruption. ICW found embezzlement, misappropriations, and mark-ups among the primary methods of corruption practices in Indonesia.

When dealing with the Indonesian government, companies are sometimes obliged to partake in a bit of ‘dirty work’ (petty bribes, facilitation payments, etc.) just to get things done. Entrepreneurs and investors should also be wary of the wrongdoings happening in Indonesia’s judicial sector.

The Norway-based U4 Anti-Corruption Research Centre claims bribery for business permits is widespread in Indonesia. Whether they want to or not, local companies are routinely forced to participate by paying extra just to obtain the appropriate permits and licenses. Should companies take the official route, they may end up waiting for an indefinite period of time, or worse, their applications could simply be rejected.

Indonesia’s Corruption Eradication Commission (KPK) speculates that as much as 30 percent of the current government tender contracts could potentially be corrupted.

Corruption commonly happens during the tender process, when firms bid on projects. To win, companies often need to mark-up the contract value and set aside profit margins just to pay the officials. Because of this, honest companies with better qualifications may not always win projects in Indonesia if their less-qualified counterparts are willing to cross the line.

Even the justice department has a reputation. The Corruption Perception Index finds that Indonesians perceive the judicial sector as one of the most corrupt institutions in the country. “It depends on how much money you have,” said prominent Indonesian lawyer Adnan Buyung to The New York Times, arguing that the investigation, prosecution, and judgment of cases in Indonesia follow rules dictated more by the free market of the middlemen than by the actual law.

The Indonesian police regularly embezzle money and receive “incentives” to conduct more thorough investigations. The Times recently cited retired official Aryanto Sutadi, who estimated that 25 percent of police officers have broken the law at one point or another to earn extra income.

Particularly for foreign investors, matters related to corruption should be taken seriously. Even if conglomerates are able to make short cuts in Indonesia, the effects can be far-reaching. For example, Singapore and Malaysia have what is called an “extraterritorial effect” for their local anti-corruption laws. What this means is that confirmed acts of corruption committed abroad may still be treated as if the offense took place domestically. So, while Singaporean and Malaysian entities may find it easy to cut corners in Indonesia to advance their business, participating in bribery or facilitation payments may ultimately cost them their livelihoods and reputations back home.

The United States’ Foreign Practices Corrupt Act (FCPA) goes one step further as it prohibits not only US companies, but also companies affiliated with the US from bribing government officials anywhere. In December 2014, the US Justice Department punished three executives from the French energy company Alstom SA, ordering them to pay a total of US$772 million in criminal penalties for bribing government officials in several nations. Two of the occurrences happened in Indonesia. Prior to that, US regulators fined German Insurance Allianz SE US$12.3 million for bribing Indonesian government officials.

The prospect of receiving heavy fines and reputation damage has played an important role in determining whether foreign companies want to try their luck in Indonesia. Should foreign companies plan to expand via acquisitions in Indonesia, then it’s probably wise to raise efforts with due diligence. The last thing a foreign company wants is to be found guilty by association, without knowledge, after the fact.

How can we fight this?

Fortunately, Indonesia seems to slowly be heading in the right direction when it comes to combating corruption. More than two decades ago, the government established the KPK. Throughout the years, the organization has convicted several high-profile politicians. Last month, the Indonesia Investment Coordinating Board chairman (BKPM) Franky Sibarani told Tempo that he intends to work more closely with the KPK to combat corruption in the investment sector.

Under the new leadership of Pesident Joko Widodo, the government aims to be more transparent. Government bodies are starting to utilise one-stop online solutions to process things like business permits and tender offers. With the system put in place, there are now fewer touch points for bidding companies, and therefore, fewer opportunities for officials to get their palms greased with so-called facilitation payments.

Investors interested in Indonesia would do well to go over the one-stop integrated service created by the BKPM.

Officially launched last month, the service aims to eliminate costly red tape for entrepreneurs and investors. Applicants can now process 134 different permits from 22 ministries and institutions. In an effort to ensure transparency, the BKPM also lets applicants monitor the progress of their permits online.