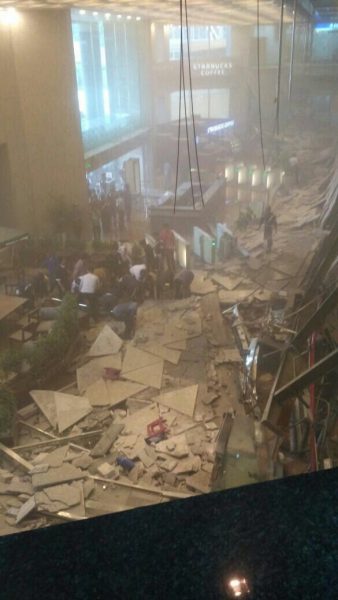 The walkway above the lobby of Tower 2 of Indonesia’s Stock Exchange Building collapsed this afternoon just after 12:00p.m. local time. An unknown number of people were injured, but no fatalities have been reported thus far. Markets reopened at 1:30pm local time and continued trading despite an earlier evacuation as reported by the Straits Times.

Reports of an unspecified number of people were trapped under debris as videos of people screaming and rushing out of the building went viral. The walkway was located above the main lobby of the building and near where visitors are screened and checked before entering. Hundreds of office workers were leaving for lunch when the walkway collapsed.

The cause of the collapse is unknown, but initial reports do not point to a terrorist attack. The IDX is located opposite Pacific Place, a popular mall in the Sudirman Central Business District.

At least 28 people hurt after a mezzanine floor inside the #Jakarta Stock Exchange collapsed. Spokeswoman at Siloam Hospital says they’re assessing the seriousness of the injuries. pic.twitter.com/CChL0cCUoC