Strong eruptions normally are a hazard for people living close to the volcano. In 1963 the eruption of the Mount Agung, the Bali’s sacred mountain, killed more than 1,500 people and destroyed several villages.

In the middle of all this destruction, it happened that there was an abandoned ship grounded in front of the fishing village of Tulamben, and the lava flowing from Mount Agung moved it from the shore, making it sink a few metres away from the beach. The ship has been there since the Second World War, when it was torpedoed by a Japanese submarine, while navigating in the Lombok strait bringing a cargo of railway parts and rubber.

For sure nobody at that time could even imagine that this ship, the USS Liberty, would become one of the main touristic attractions of the island 40 years later. Located in the north-east side of Bali, Tulamben is still a remote village, but now, almost every day, hundreds of divers come from all around the world to dive the USS Liberty, due to the strategic position, the easy accessibility even for beginners and the impressive marine life that have colonized the wreck.

To tell you the truth, the ship is very far from intact. It has been broken in many pieces and sometimes “purists” of wreck diving don’t like this. But swimming between the plates of the ship allows divers to see portholes, winches, guns, and even ladders. If you’re lucky enough, you can even see Pygmy Seahorses, a huge group of jackfish, bumphead parrotfish, barracudas, and nudibranch. A friend of a friend has been so lucky to see a whale shark and sunfish (the famous Mola mola) hovering on top of the wreck. My suggestion is to take it easy with the Bintang or ask your doctor about nitrogen narcosis effects. 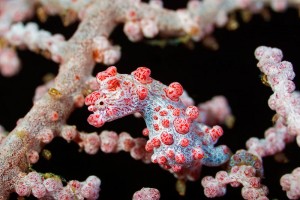 What nobody says is that the USS Liberty wreck is normally FULL of divers. And I don’t mean around 20 or 30 people. I mean there can be up to 100 divers in the same dive site. Considering that the ship is approximately 150 metres long, it can mean there is a diver every two metres of the ship. Worried? Many dive centres of Tulamben have found the solution: jump in the water at around 6 AM, well before the day-tripper barbarian hordes from South Bali invade the beach.  Sometimes it happens that many dive centres of the area have the same idea, so you will have a crowd dive anyway, but at least with sleepy divers that normally swim slowly. When you finally emerge from your dive, around 8 AM, you can already see the beach filling with tanks, t-shirt sellers, Balinese women bringing tanks on their head, sometimes even two at the same time (seriously).

It’s time to relax a bit, to have your breakfast and get ready for another dive site: there are many around the wreck, most of them are muck diving, and world-class muck diving in my opinion. It is incredible how in every single dive I’ve made in Tulamben I have always photographed some animal species not officially described by science. Again, seriously!

Anyway, diving in the USS Liberty is an experience that should not be missed. If you choose the right time and the right guide, you will be impressed by the diversity of life surrounding the wreck. And maybe you can have the strange experience of witnessing an underwater marriage, or somebody diving with a flag celebrating their 100th dive. 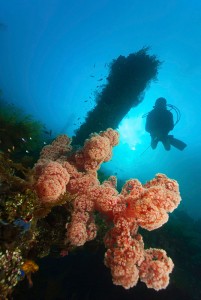 A large variety of divers populate the Tulamben beach. Normally their origin is easily distinguishable from their habits.

1)    The Japanese: responsible of the presence of the wreck (a Japanese submarine torpedoed the ship), they don’t seem to regret it. They always have colourful wetsuits: red, yellow, orange or white are the dominant colours. Quite commonly they have funny hoods with devils, dragon’s tail or dog’s ears.

2)    The Indonesians: Since diving is becoming a popular activity in Indonesia, many divers coming from all the country want to dive the USS Liberty wreck. Normally they have shiny new equipment, huge underwater cameras, the top-end model of every piece.

3)    The Singaporeans: Technology-geeks, normally they bring their latest-model underwater cameras even under the shower. New iPhone underwater housings allow them to share their pictures on Facebook directly from the surface of the sea. Cool lah?

4)    The Russians: They don’t care about the wreck. They just want to see sharks, possibly aggressive. Don’t try to tell them they can see a pygmy seahorse, unless you are ready to swear that last week that pygmy seahorse almost killed one of your friends.

6)    The Italians: Doesn’t matter what, they have to appear cool. Wearing colourful wetsuits is absolutely not an option; it doesn’t match with the fins. Normally they like the wreck, but they are even more interested in where they can have a good lunch.

7)    The French: Easily distinguishable because they’re complaining about something. Mainly because they’re wearing socks instead of boots and rocks on the beach are painful. But they always find something to complain about.