Buses will take you just about everywhere on Bali. “When are you leaving for Amlapura?” I asked the bus driver one recent Friday at Denpasar’s Batubulan Terminal.

“Five minutes,” he said. His engine was running, not like the other buses I had passed on the road, so I hopped aboard the old rattletrap, sitting between a 28-year-old musician from Frankfurt, an out of work Balinese chauffeur and an old turbaned Balinese crone carrying a bamboo tray of melons. A few other passengers were dozing in the steamy mid-morning heat in the back of the bus. 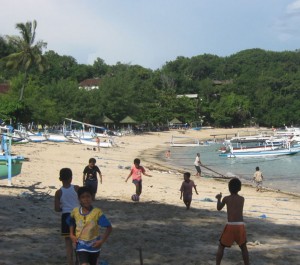 My destination was Padangbai on Bali’s southeast coast. We drove by teeming Sukawati market, Gianyar’s shimmering rich valleys and multitudes of quilted rice terraces, shook through Klungkung’s downtown and the humid seaside town of Kusamba before the traffic thinned out along the black-sand coastline beyond Goa Lawah. From the turnoff to Padangbai, 50 km before Amlapura, I climbed on to the back of a motorcycle taxi that took me on a new road straight to port. The whole trip took less than one and a half hours.

Its entrance partially hidden by trees, the Topi Inn at the end of the street is a traveller’s landmark. Built completely of bamboo and coconut wood, the lodging is named after its peculiar top hat-shaped traditional grass roof – a big rambling structure with an open-air restaurant on the ground floor, a 12-bed dorm and private rooms on the second floor, with the owner’s quarters teetering on top. The whole building creaks and sways like a living thing.

Since its unofficial opening over 28 years ago, the hotel has grown into one of the most popular rest stops in all of east Bali. The restaurant’s painstakingly evolved menu, which draws clientele from both Padangbai and far out of town, turns out peerless hamburgers, a seafood basket, a classic nasi campur, a prized beef rendang, a large assortment of fresh juices and the best Cimbali-brewed cappuccino in town. The creaking stairs in back led up to the second floor looking out over the beach. I threw my shoulder bag on top of one of the mattresses, and took a walk down Padangbai’s one charmingly scruffy main street lined with the confetti-like facades of souvenir stalls. The port was scrappier, noisier and more crowded than I remembered it back in the 1980s when it was mainly a backpackers’ hangout. Though no longer a sleepy little port, Padangbai still has the feel of a small harbour town and fishing centre and not of a big impersonal port like Gilimanuk on the western tip of the island.  Offering three beaches, inexpensive restaurants and hotels in every price category (except five-star), the small harbour town is an under-appreciated destination with its own trouble-free atmosphere  – a unique place to spend time before and after travelling or dive excursions. At any one time, perhaps as many as 400 people are overnighting here, about half either leaving for or arriving from the neighbouring island of Lombok.

It was after Friday prayers and Muslim Indonesians, the women and girls fully clothed in Islamic attire, were picnicking on the sand. Gleaming family cars – arch status symbols of the burgeoning Indonesian middle class – and a long unbroken line of motorcycles were parked all along the sidewalk. Seeking shelter from the heat, I sat with the fishermen, drivers, touts, sunglasses, lottery, ticket, trinket and fruit sellers in the breezy bale off the parking lot. Some things have remained unchanged for 30 years. Everything worth seeing is still within walking distance. Tangles of brightly painted sailfish-bowed jukung were still pulled up on the beach and fishing and dive boats still bobbed in a perfect pearl-shaped bay.

A major dive destination, dive companies from all over Bali bring their clients to this sheltered bay, which offers a safe harbour for dive boats. Since diving is year-round with no off-season, the business has become a boon to Padangbai and its residents. The surrounding waters of Amuk Bay, with Padangbai to the South and Candidasa to the North, boast outstanding dive locales just minutes away, particularly for rare species such as the giant mola-mola sunfish, a marine wonder with a circumference of 2.5 metres.

On my last day, I took the left fork at the end of town and climbed 10 minutes up the winding road, then down into a parking lot and flight of stairs to the Blue Lagoon, a small protected bay framed by gray sand. The uncrowded beach with scattered rock formations, public changing rooms and massage lounge chairs is an easy dive site with excellent marine life, soft corals and a huge Staghorn coral. People were snorkelling right off the beach where the white sand bottom slopes gently to 22 metres. While the locale is used for teaching open-water courses, experienced divers and photographers also thoroughly enjoy the site. Currents can be tricky, but on many days the bay can be as calm as a millpond.

Padangbai makes a strategic base from which to see the whole area and also serves as a major gateway to the Eastern Islands, the storied realm of Wallacea. In the high season around 1,000 people arrive at the port from the tourist centres of southern Bali every day, embarking on either one of the 18 ferries making 32 crossings around the clock to Lembar Harbour on Lombok or boarding one of the fast boats for the idyllic Gili Islands off Lombok’s west coast.

All through the night the strong headlights of approaching and departing ferries cut through the darkness, their engines churning while arrival and departure announcements blare from the brightly lit jetty followed by the deep haunting sounds of ship’s horns. Some guests never make it to the eastern islands or even out of town, preferring to eat incredulously cheap marlin, barracuda, snapper, cumi cumi and roasted prawn dinners or sleep, dive, read and chill on the beach while unhurriedly trying to figure out what to do next.

What Experts Are Saying about Lombok’s $3B Mandalika Project