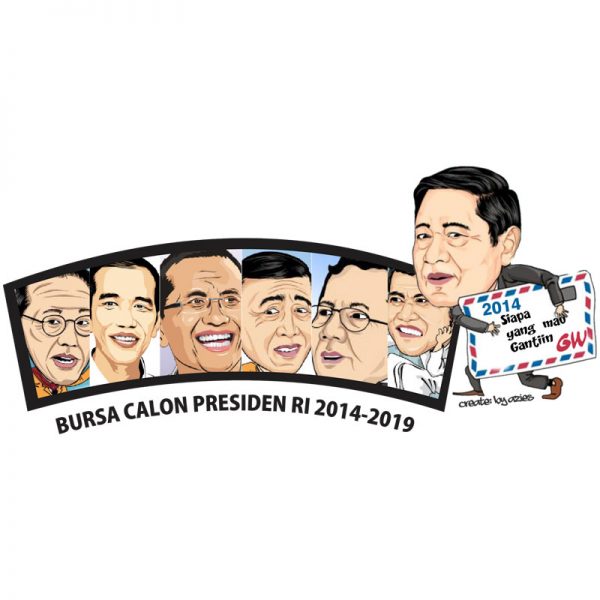 A while back I was watching this Metro TV program called Kick Andy and on it there was this impoverished woman who had kept changing her name when she was younger because she was always suffering from ill health. Unsurprisingly, she didn’t get any better. But after changing her name for the umpteenth time, guess what? She actually stopped getting sick! Wonders of all wonders! Apparently she had finally found the “right” name and was now destined to live a long and healthy life – well, until her death, of course.

Anyway, what with the general elections coming up in Indonesia, it made me wonder; what about the country’s politicians? Are they blessed with the “right” name or not? No, we don’t need to worry about what the politicians actually believe or what policies they intend to implement. What really matters are their names!

But how do we interpret them?

Well actually that’s not so difficult because there is ‘anagrammaticography’, a highly regarded tool which is noted for its uncanny ability to accurately draw meaningful conclusions about the political figures and their views on a host of issues. Used since the middle ages, anagrammaticography really came to the fore in the 17th century when it was noted that an anagram of ‘William Shakespeare’ revealed the phrase ‘I am a weakish speller’ (Shakespeare, of course, was noted for signing his name in at least seven different ways).

Although criticized by religious types as “the work of the devil”, the power of political anagrammaticography cannot be overlooked. An anagram of ‘Sarah Palin’ rather ominously reveals ‘Sharia plan’ (I always suspected that the US religious right had made an unholy (sic) alliance with the Jihadists, so thank God Barack Obama won the US presidential elections). Incidentally, an anagram of Barack Obama comes up with ‘Aback, a Rambo!’ – strongly suggesting he ain’t quite the limp-wristed liberal that many believe he is!

Megawati Sukarnoputri (PDIP): Although not noted for her intellectual acumen, Megawati is at least a loveable housewife with a famous father.
Verdict: Utopias wreak maturing.

Yusuf Kalla (Golkar/PKB): This Golkar Party stalwart is the second child out of 17. Although he has nationalist tendencies he also supports foreigners’ efforts to ingratiate themselves into Indonesian society: “If the janda [divorcees] get modest homes even if the foreign tourists later leave them, then it’s OK. The children resulting from these relationships will have good genes. There will be more television actors and actresses from these pretty boys and girls.” Bizarrely, he was named by PKB as their choice of a possible candidate in the 2014 presidential-vice presidential elections.
Verdict: Flaky usual.

Aburizal Bakrie (Golkar): One of the richest men in Indonesia (worth anywhere from US$3-5 billion depending on who you believe) and the protectorate of the poor, Aburizal has a less-than-enviable track record in business and he is about as popular in East Java as an anorexic at a weight-loss convention.
Verdict: I bulkier bazaar.

Hatta Rajasa (PAN): Solid minister with a good track record who married off his daughter (Siti Ruby Aliya Rajasa) to SBY’s youngest son, Ibas.
Verdict: That a jar as a.

Surya Paloh (Nasdem): Media mogul who owns Metro TV, a national TV station, which is noted for its tendency to employ hot and attractive newsreaders.
Verdict: A hourly sap.

Joko Widodo (PDIP): Man of the people (hurrah!) – but without the revolutionary zeal of a Hugo Chávez – Joko is the clear favourite to win the presidency according to a slew of opinion polls.
Verdict: Wood OK Jodi.

Dahlan Iskan (Democrat): Global car manufacturers like Toyota and Ford spend hundreds of millions of dollars on testing to ensure their cars are roadworthy and safe to be driven on public highways. Such concerns didn’t bother Dahlan Iskan, however, and he drove around his flashy-looking ‘Ferrari’ electric car with wild abandon – before the brakes failed and the car crashed. Luckily, no one was hurt, although the self-made ex Java Post and PLN man still remains a long shot for the presidency.
Verdict: Ha! Kind nasal.

Rhoma Irama (PKB): Noted womanizer who is not ashamed to play the religious card, the prospect of this legendary dangdut singer becoming the president sends shivers down the spine.
Verdict: Or I am haram.

Yusril Ihza Mahendra (PBB): Leader of a party with no seats in parliament, Yusril’s chances are slim to say the least.
Verdict: I’m zany, lush diarrhea.

Sutiyoso: Selfless and tireless worker for the people, Sutiyoso’s crowning achievement was turning Jakarta into a city of huge cultural interest by establishing it as Southeast Asia’s “Venice of the East” (subject to adequate rainfall).
Verdict: So it’s you!

Prabowo Subianto (Gerindra): UK-educated ex-leader of Indonesia’s feared special ops, KOPASSUS. Now a socialist, apparently. Long-term plans to run the country, and with his financial resources who would bet against him?
Verdict: Now absorb utopia. (Now I wonder if that’s ever going to come true…)

The anagrammaticography is fairly harsh and rules out many of the contenders – mostly notably Wiranto, Rhoma Irama, Surya Paloh, Bakrie and Gita Wirjawan. The leading contender Joko Widodo is given a lukewarm vote of confidence, although surprisingly, the analysis clearly suggests that Prabowo (Now absorb utopia!) will win the presidential election with Sutiyoso (So it’s you!) as his right hand man! The military to stay in power? Some things never change.