When one looks to Mount Ciremai, with scudding clouds against a sapphire sky, it is impossible to miss the trademark design of Cirebon’s batik. Its bright spare ground with clean, curling lines and graduated hues on fine cotton is unmistakable. The seaport town of 350,000 people on the north coast of Java has long been a trading and cultural hub. Only a three-hour train ride from Jakarta, it siphons off the overflow of Bandung tourists and has become a pleasant diversion in its own right with four- and five-star hotels.

The area is renowned for its handicrafts – mainly batik, rattan and glass painting. Distinct designs and inspiration stamp them as uniquely Cirebon. With traders trekking from the inland mountains and spanning the seas, the city became a crossroads for goods and people. Indian textiles, Chinese ceramics, European silver and gold were exchanged for spices, bringing wealth and station to this port.

Cirebon began as a Hindu kingdom in 1378, but by the 16th century, Islam had secured firm footing. Sunan Gunang Jati came to power and established the city as a centre for religion and the arts, and with his marriage to a Chinese princess, began mixing Hindu, Muslim, Chinese and European influences in its handicrafts. 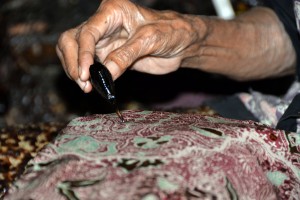 700 years ago, a decree established travelling, male-only artist guilds along the coast. This spawned understated, masculine batik patterns. Before the Dutch arrived, the cloth likely was drawn and painted for royalty or religious use only, with roots in the tulisan or storytelling scroll. Over time, batik became a cloth of the people making it was an accomplished skill for women to master for marriage consideration. The term ‘batik’ means ‘cloth with little dots’, describing the fussier feminine details added to the elaborate resistance process of waxing and dyeing. Originally, the dyes were made from bark, turmeric, mango leaves and other natural substances.

The pattern on batik is stamped or hand-drawn with a pipe of hot wax in significant motifs like dragons, peacocks, carriages, feathers, flowers and more, revealing Cirebon artists’ geographical backgrounds and heritage. In principal, anyone can do batik. All it takes is practice, patience and a penchant for hot wax. For fine batik, venture to Trusmi, where this home industry is still practiced by a customary circle of women. With bulky, wax-spattered aprons across their laps, they deftly draw the canting in the bold lines of wada rocks, rounded clouds and jutting peaks, which signify mountains reaching for heaven. 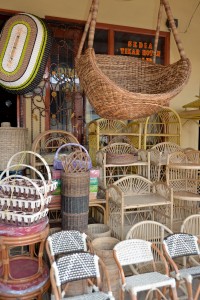 The rattan industry originated from the flexible, strong design of bamboo and vine-jointed structures. Rattan is traditionally harvested from the jungles of Borneo, Sulawesi and Sumatra with the trade concentrated in Java. Several hundred species of this palm also flourish in plantations in Indonesia and beyond the archipelago. The vine-like plant has a slim stem, growing up to 200 metres in length with a consistent diameter, making it an ideal component for weaving. The bulk of raw materials for wicker furniture was once exported, but in 1987, a law established that only finished products could be shipped. Since then, demand has created a booming manufacturing business in Cirebon, showcasing these hard-wearing products worldwide.

In the warren of streets of Tegal Wangi, this craft is alive and well. Baskets, cradles, settees, chairs, room screens and shelves are woven, integrating other natural fibres, like water lily roots, sea grasses and banana leaves to create neutral or vivid decoration. In open-air shops, chairs are stacked to ship and piles of baskets are coated in glossy urethane. Framing rods, slats and braided coils form piles, while hoops hang from cob-webby rafters. Browse the wide array of goods and skilful handwork and strike bargains, like we did, on a new settee, chairs and table bought for about Rp.1 million, including delivery.

Glass painting, or lukisan kaca, is emblematic of Cirebon and began in the 15th century. The framed work is flamboyant and strikingly deceptive. Instead of a painting behind glass, the method is worked in reverse with the glass serving as the canvas. The artist must think backwards, applying the finest details in black ink first, adding the larger subject and finishing with the background. It is exacting with no second chances. Despite the painstaking process, the results are rich with detail. Glass painting had fallen out of practice, but it is resurging with modern techniques. Contemporary painters have added three-dimensional elements through layers of gradation, glue and additional glass for complexity and grain. The subjects include traditional characters, such as wayang or Barong, as well as portraits or landscapes.

Painter Arles Sutardi demonstrated his edgy passion, brushing red and black oil paint across the glass and scraping it away with a paper wedge. His daubs, sweeps and etched lines formed a dhow, tossed at sea on a stormy night. The artist coated the back with spray paint and completed his work with a flash of flame from a torch to harden and seal the piece. The speedy show of glass painting exemplified an evolving work in progress, like the long history of arts of Cirebon.

Getting there:  A three-hour train ride from Jakarta

Areas for crafts:  Trusmi for batik; Tegal Wangi for rattan