When visiting Bandung there are certainly many attractions to see, but few folks are aware of the fascinating heritage this city has to offer, from its early beginnings to what is now a sprawling metropolis.

It all started back in the early 1800s when Dutch colonialists, led by Governor-General Daendels, decided to build a road across Java called the Grote Postweg, which was mainly constructed for defence purposes. This major undertaking opened up access to many underdeveloped areas of Java, including the Bandung Basin – now home to over ten million people.

Having lived in Bandung for many years, I have rarely ventured into the heart of Bandung to take a closer look at what’s there. And I suspect this is the case for many other expats living in Bandung and weekend visitors from Jakarta who have been deterred by the heavy traffic congestion downtown; missing out on discovering the fascinating early history of the city and its significant heritage – the city once known as the Paris of Java.

Whilst we had often sat out in the front of the Savoy Homann to enjoy a cold beer in the afternoon or attended some evening events there, I had never taken time to explore this iconic building and the many others like it nearby. So when invited to participate in a heritage walk one Saturday morning, I took the opportunity to find out a bit more about this central heart of Bandung.

We had a wonderful guide, Pak Amor, who lectures on tourism at universities in Bandung and Jakarta. He is a native of Bandung, having lived most of his life in this graceful city, and has a genuine passion to share the history and development of Bandung with visitors from home and abroad. 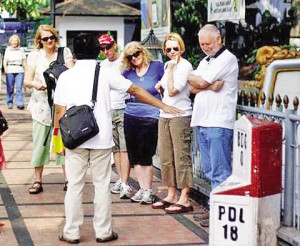 Our walk started from the 0km marker, opposite the Savoy Homann on Jalan Asia Afrika. This landmark is where Daendels first proclaimed the place from which Bandung would be established as a new centre to service travellers along the Trans-Java road. Nearby is the Preanger Hotel, which was built in 1929 by a Java-born Dutch architect, Wolff Schoemaker, who went on to be a lecturer at the Bandoengsche Technische – now the Bandung Institute of Technology.

Our small tour group walked to other buildings close by, many of these also associated with Schoemaker’s name. On Jalan Braga we visited the old Majestic Cinema, now the Asian-African Conference Museum, and what used to be the Societeit Concordia Club House, now called Gedung Merdeka. Both these wonderful old buildings give visitors a good glimpse of significant periods in the city’s past, with the Concordia Club providing a feel of what it was like in much earlier times and the exclusive and faux nature of the Dutch colonialists’ environment. Contrastingly the museum has a very different feel, focusing on Indonesian nationalistic pride and the distinction of Bandung hosting the Asia Africa conference in 1955, with many well-known dignitaries and leaders from the non-aligned countries attending. This snapshot of the world at the time is a fascinating exhibition and an opportunity to gain insight at the politics of the early to mid-1950s.

After leaving the museum, our tour crossed the road and walked down to Alun-Alun, the grand city square of yesteryears, now sadly not quite the place it used to be. Next door is the Great Mosque, where from the top of the tower you have a 360 view of Bandung. It was from here Pak Amor pointed out the different areas of the city looking northwest to the Chinese quarter and northeast to the leafy streets of Dago, where the Dutch mainly settled during the colonial times, and to the south, with its sprawling suburbs reaching as far as the eye can see. This part of the tour was very much a surprise, as most of us didn’t realise you could take the lift up to the top of the tower for a small fee.

Next stop on the tour was back to the Savoy Homann Hotel, which apart from its architectural appeal, has an interesting history and small gallery with artefacts and memorabilia on display. This amazing icon of Bandung’s past still retains its charm and splendour, and an ambience you will find hard to match elsewhere.

From the Savoy Homann, Pak Amor led our small group to our final destination, up Jalan Braga to the Sumber Hidangan Café, past small galleries, souvenir shops and nightspots. This once grand social centre of Bandung is still a popular hub for many tourists and party goers, and whilst many of the old buildings now show signs of neglect, they still reflect a time when this narrow street was the essence of a proud and confident retail sector providing high quality goods and services to the more affluent local residents and visitors from Jakarta and abroad.

For those wanting to join the Bandung Trails city walk, there are several options:

The prices range from IDR 125,000 – IDR 150,000 per person (with meals and entry into some buildings). For groups, special prices can be discussed. See Bandung Trails’ website for further information: www.bandungtrails.com.

When in Bandung next and you require more information about the above and more attractions, please visit the soon to be reopened Tourist Information Centre at Bamboo Shack, in Jl. Ir. H Juanda No. 462D Dago. It’s located just before the local morning market and angkot station on the right-hand side, and where the road becomes a single lane. Tel. 022 2533529 or visit www.bambooshackdago.com