Guidebooks love to tell you where to go and how to get there. Travel snobs love to tell you how wonderful a place was so many years earlier before the tourists came. The smart ignore both and do their own thing.

Read the travel forums and you would probably have no interest to visit Java; so depressing can it sound in cold .html. Indeed, it can be hard to reconcile the Java we see on a daily basis and the Java that laid itself out before the eyes of some guy who had a very long beard back in the 19th century. Alfred Wallace, the famed Botanist, claimed that Java was “…the finest tropical island in the world.”

The deforestation and construction of the last decades would have made him less effusive with his praise, but that beauty, that stillness can be found with a little effort. And one of the best ways to get up-close and personal to the Java Wallace may recognise is neither through message boards nor guidebooks, but by hashing!

The Hash House Harriers, to give them their full title, started in Kuala Lumpur back in the 1920s and have since expanded into a multi-national, chaotic organisation infamous for its ability to get nothing right all the time. But its shareholders—the runners and the walkers—swear by it because they know no matter where they turn up in the world, the chances are high that a hash will not be too far away.

Hashing is basically cross-country running and involves following a trail left by the run’s organizers in the countryside. There are some other complications like check-backs, etc., but that, in essence, is the Hash. After everyone has finished the trail, in whatever condition they may be in, they gather together in a circle, drink beer, call each other by their often double-entendre nicknames and basically abuse all and sundry. Oh, and drink more beer.

There are several Hashes in Jakarta, meeting on different days of the week and there are some hardy souls who join in each and every time. One of the most popular is the Thank God It’s Saturday Hash (TGIS), which runs every second Saturday in the month, and recently celebrated their 25th anniversary in the shadow of Krakatau in the Sunda Straits.

With the promise of beach time, run time and beer time, several dozen of TGIS’ finest headed west on a wet and miserable Saturday in full hash gear to celebrate together. It had been my first ‘run’ for a few years and there were several new faces among the more familiar and nearly always, they had similar stories of Hashes elsewhere. 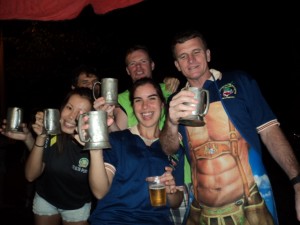 Take, for example, a couple who had previously lived and worked in different cities in China. Here, on the fine sands of the Javanese coast, they regaled each other with tales of Hashing in the Middle Kingdom, and what do you know? They even knew some of the same people.

That is the Hash. A kind of giant, albeit messy, brotherhood of like-minded souls who may not know each other, but will likely know the same people somewhere down the line; they were Facebooking long before some sweaty college kid thought it would be a great wheeze to connect us remotely.

I recall another time I was trying to manoeuvre myself down a slippery slope while this chap was telling me how he had known my brother on the Hanoi Hash back in the early 1990s!

Hashing is very much a people-orientated activity that looks after its own. In recent cases of bereavement, they have pulled together to raise money for the loved ones left behind because that is what families do, and if nothing else the Hash is a giant family.

Raising money plays an important part in the Hash with the Red Dress Run, an important event in the Hashing calendar. The last one was held in November and the streets of South Jakarta were treated to the perhaps unedifying sight of grown men and women clad in red calling out “On on!” while the rest of the city looked on in amazement. More than Rp.10 million was raised that day.

And what of the TGIS anniversary run? The promotional literature had Krakatau exploding and Hashers approaching the finish line on the crest of a tsunami, but that never happened. Hashers were advised to bring their sun cream, but that wasn’t needed. The incessant drizzle clouded the view out to sea but was never going to deter the faithful from their run and off they set through the rice fields and down the slopes to the finish line, slipping and sliding along the way.

In short, it was perfect Hashing conditions. In the rain and the mud there is nowhere to hide and for Hashers, roughing it is part of the fun; a runner returning in a clean t-shirt and wearing nice clean sports shoes is treated with suspicion and is liable for ferocious punishment from the bedraggled masses. 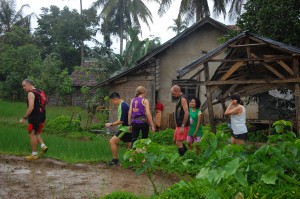 Gathered together under a soggy umbrella for the circle, that oh-so-important post-run ceremony, folks were ‘punished’ for taking shortcuts, for wearing hats and in your humble scribe’s case, for having the temerity to break the Hashing omerta and spilling the beans to an unbelieving outside world.

I had to head home early, so after necking one last cold beer from the pourer I made my escape. A fine drizzle remained, while on the horizon the clouds had cleared enough to allow Krakatau to put in an appearance. The waves crashing against the beach were at times drowned out by the lusty shouts and laughs from the circle that was only just getting started.

The following morning would see another run for the faithful, but for now, it was beer time and they had certainly picked a beautiful spot for it.

TGIS Hash House Harriers is a mixed adult Hash and runs every 2nd and 4th Saturday of each month.
Men: Rp.150,000