Have you ever seen a jet-black chicken before? Look no further than Indonesia.

Indonesia is home to some of the world’s most exotic flora and fauna species. This includes ayam cemani, or cemani chicken.

Ayam cemani, also known as “goth chicken”, “Sith Lord bird”, and “the world’s most bewitching chicken”, is described by Jason Bittel of National Geographic as the “most deeply pigmented creature” found in nature because its feathers, beak, tongue, eyes and claws are all jet black.

Not only is it’s physical appearance black; its organs, muscles, bones, and meat are as well. However, the black colour isn’t present in cemani’s blood and eggs.

Three other chicken breeds – from Sweden called the Bohuslän-Dals svarthöna, Vietnam called the black H’Mong, and the silkie – share these black internal features. Scientifically, this condition is known as fibromelanosis, or dermal hyperpigmentation.

“Fibromelanosis stems from a complex rearrangement in the genome,” said geneticist at Uppsala University, Sweden, Leif Andersson. “Members of all four affected breeds can trace the mutation back to a single ancient chicken. What is interesting is that all chickens with this phenotype carry exactly the same mutation,” he said. 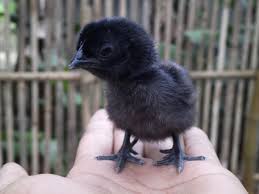 The variation occurs in a gene called endothelin 3, or EDN3. “Normally, a specific group of cells in developing chickens’ systems use EDN3 to guide the migration of colour-creating melanoblasts, but in hyperpigmented breeds, almost all of the chickens’ cells express EDN3. The result is a ‘miss-migration’ in which ten times as many melanoblasts migrate to the “wrong” place,” said Andersson.

The cemani first emerged in Java. According to GlobalPost’s Patrick Winn, the cemani is viewed as a magical creature with outstanding healing powers. Winn was told by a cemani farmer that nobody eats cemani, but locals are interested in its magical blood.

An anthropologist at Harvard University Veronika Kusumaryati said the cemani was associated with local royals and nobility who used this chicken breed in 12th-century rituals as a messenger connecting the human and supernatural realms.

“Javanese lore maintains that the world is occupied by spirits, good and bad, whose power can be mobilised to help people to gain power, reputation, and wealth. For these purposes, one should offer cemani chicken, as the ghost and spirits love cemani chicken’s meat and blood,” said Kusumaryati.