Out for morning exercise on Kuta's new breakwater

Ask any tourist on their way to Bali where they intend to visit and more than one in five will tell you they are going to Kuta beach at some point during their stay.

Thirteen million people will fly to Bali this year and about three million will come by road and ferry from Java. Most of these travellers are on their way to visit family and friends or are themselves living and working in Bali. Around a half, though, are genuine tourists, most of whom stay in the southern part of the island and many will visit Kuta beach, made famous internationally by adventurous surfers and holiday makers who have had a magical holiday in Bali since the 1960s and 1970s. 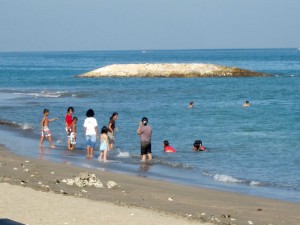 In those days, Kuta was a sleepy fishing village with areas of big surf breaks attracting few surfers, mainly locals playing football, building sand castles at the waters’ edge or simply out to view and photograph the beautiful sunset, being particularly popular of a weekend or holiday. Today, Kuta beach is home to a wide variety of activities attracting between 3,000 to 12,000 people on any given day.

Kuta beach proper stretches for over 5km, from Ngurah Rai International airport in the South, part of Tuban, through Kuta village, and on northwards through Legian, with its many budget hotels, bars and restaurants, onto upmarket Seminyak. From here, Kuta beach, though now with other names like Berawa, in reality continues onwards through the other upmarket North Kuta villages of Petitenget, Batubelig and Canggu, where the scene is quieter and much more personal, providing a truly amazing variety of things to do and see along its whole length.

With its 15km long broad sweep of the Indian Ocean, Kuta beach is the best known tourist resort area in the whole of Indonesia and is a great internationally renowned surfing beach along much of its length. But what you see today was threatened for more than four decades with encroaching erosion as the strong waves and high seas coming in from the southwest removed large volumes of sand from the beach.

With the 1,200 metre extension of the runway into the sea at Ngurah Rai International Airport in the mid-1960s and lengthened again in the early 1990s, the lower part of this sweeping coastline had receded significantly, particularly along the 2.5km beach on the northern side of the runway as far as Kuta village. The beach was subjected to continuous heavy erosion, so much so that several big hotels and restaurants along this part of the beach were severely battered by overtopping waves and sea spray hitting the shoreline restaurants at Santika Hotel and Pantai Beach by the mid-2000s. 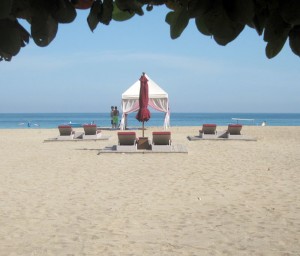 While the problem of beach and land loss to the sea in this area of Bali had been recognised for more than twenty years, with a Bali Beach Conservation Project in place since 1996, it was not until 2008 that this US$ 80 million project, which also covered renewal of the beaches of Nusa Dua and Sanur plus renovation of the 16th century holy temple of Tanah Lot, was implemented at Kuta.

The project at Kuta beach consisted of beach reclamation or, to use the engineering term, beach nourishment, with more than 0.5 million tonnes of golden sand brought in by barge from offshore Geger beach in Nusa Dua and pumped ashore 24/7 for over two months over a 7km stretch of the shoreline. The reclamation aimed to restore the beach to its former size and created a new beach 60 metres wide in places, with three offshore largely submerged breakwaters to encourage the formation of two small bays along this part of the coast.

Five years on, the expanded beach, which lost 10-15% of the sand deposited in the first two years, has stabilize The project, which suffered more than a decade of delays because of fierce resistance by local residents who feared that the originally proposed groynes would be unsightly and reduce the waves which attracted the surfers, is today rated a huge success.

So much so that now everywhere in Bali undergoing significant annual coastal erosion now wants such projects, with over 80km of coastline falling into this category in 2011. The impact of this project is that the beach today is both higher and much wider than has been seen for decades, greatly increasing the area available for people to enjoy their various beachside activities.

What will we do on the beach today, Daddy? 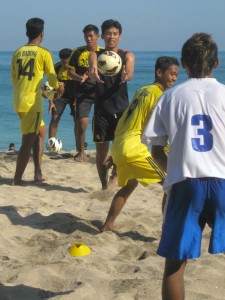 The answer to this familiar cry is truly outstanding.

Take a walk along the beach and you will see a range of sun loungers with umbrellas laid out for the tourist to use. But this is just the most obvious of the beachside sights for the tourist who has come to get a tan, a beachside massage, their hair braided or parts of their body tattooed. For every day of the year, there is a whole beachside industry poised to go into action to serve the tourists’ every need and whim.

For the more activity-oriented, there is of course surfing – and more than half a dozen reputable surf schools, together with a host of individual surfers, to provide the equipment and show you the basic skills necessary. Many who take these courses with the established providers come to see this as giving them a truly superior holiday experience— and will vow to be back again soon to improve on their newlyacquired skills.

Surfing for beginners is very popular amongst 10 to 30-yearolds, but you will also see experienced surfers in their 40s and 50s riding the wave crests— or at least having a go.

Other water sports include paddling and swimming on a body board. There are strong currents at different times of the day so the warning flags are out most days— but with nine Balawista life saver stations strategically positioned along the whole length of this beach as far north as Batubelig, Balawista report fewer people have drowned in recent years (eight in 2010 and five in 2011), although many inexperienced surfers are surprised by the strength of the longshore current and undertow. 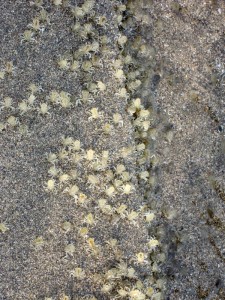 This is not a beach for parasailing or windsurfing off as winds are mostly light land and sea breezes. But this does not stop the keen kite fliers who have mastered the skill of truly flying their long-tailed creations to make sweeping dives and loopthe- loops in the clear sky above. I once came across a helicopter pilot whose kite was so big and high up it could quite literally lift a 20 kg child off the ground.

Horse riding on the beach is popular particularly for kids on ponies or teenagers accompanied by their parents on real horses. It’s a trot not a gallop, but great fun nevertheless.

Watching the cowries crawl in the soft sand, hermit crabs and tiny young crabs emerge from beneath the wet sand as the tide starts to recede as they scurry across the sand looking for a feed is a delightful way to discover what is under your feet. Or maybe it’s a sand dollar you are after—finding these flat brown echinoderms in the receding water is a fun past-time for youngsters and teenagers alike.

The monthly release of baby green turtles by the Kuta beach turtle conservation project is also a major draw bringing a hundred people or so, especially children, down to the waters’ edge to release these dayold turtle hatchlings into the sea. 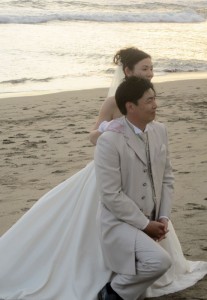 Surprisingly, there are few sea birds or scavengers seen along the length of this shoreline. No shallow pools or rocky outcrops for them to find their next meal.

But on many days during the course of any month, you will see weddings being performed in the afternoons under bridal beach canopies opposite MaJoly’s and other beachside restaurants and hotels. Or maybe bridal couples creating magical poses for their albums to show people back home their beachside wedding event.

For Balinese Hindus, from Kuta and Kerobokan, they come to the beach for a whole Ngaben ceremony or to finish such ceremonies off as they send their relatives on to the next world onboard carved-out little wooden boats.

Fifty years on, in some ways what you can see on this beach is so different, and in so many other ways very much the same.