Every visit to a pasar ikan (fish market) in Indonesia can be an unforgettable experience. Not only for the smell and frantic activities around the market, but also because it’s a mirror on the aquatic life of the archipelago, even for people used to only seeing fish served on a plate.

Fish markets are frequented by housewives, restaurant staff and even scientists. Several years ago a biologist discovered the presence of a rare fish considered extinct for thousands of years in a Manado fish market. Recently, a team of Australian scientists, after surveying Indonesian fish markets, discovered several species new to science, including new species of shark.

Close to the touristic area of Jimbaran, local buyers flock to the market for the freshest seafood in the area. The market is “structured” in three main parts: a wholesale area, a public sale area and an area with some local fishermen selling their products directly on the beach. If you arrive early enough (normally around 6 am) you will have the possibility to observe traditional Jukung (the double outrigger traditional Balinese canoe) coming back to shore after a night spent at sea.

In the frantic hours before the official market’s opening (around 7 am), many vans from all around Bali will bring fresh seafood inside ice boxes, ready to be delivered to Jimbaran sellers. The close ice-producing factory provides long bars of ice to keep the fish fresh. From personal observation and from speaking to the sellers, Jimbaran fishermen normally bring smaller reef-associated fish or small tunas (like mackerels) that are sold to local customers, while bigger fish, clams and crustaceans come mainly from the largest fishing villages located in the North of Bali, like Kusamba and the Amed area.

An eye on sustainable fishing 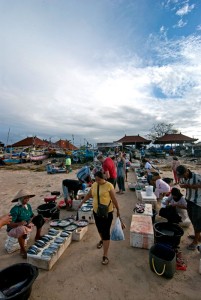 I always try to have a “sustainable” approach to seafood products. Many seafood resources are already overexploited and should be avoided (for example, shark or turtle meat). A big signboard close to the beach, in Balinese and Bahasa, warns fishermen of the prohibition of fishing some species of shark (like Thresher sharks, intensively fished off Lombok especially during their reproductive season), turtles and dolphins. There was no sign of these prohibited items in the market, although if caught, they would probably be sold in an ‘alternative’ way.

What I did notice is a relatively high presence of undersized animals (like small tunas, or coral groupers) which is a clear indication of the overfishing of these species. When big fish have already been targeted for many years, it has been scientifically demonstrated that the average body size of a fish population can decrease, which has happened to many coral grouper populations all around Indonesia and the world. Even while diving in protected areas it’s very rare to see a grouper longer than 25-30 cm. Several fishermen I spoke to told me that especially in the last 10 years the size of larger fish is definitely shrinking.

Big specimens of the so-called Mahi-Mahi (dolphin fish), indicate that they probably could be a good choice from an overfishing point of view. There were not many barracudas around, and when they are there, they are snapped up quickly as they are very easy to sell to tourists. The only large sized reef-associated fish seemed to be large snappers, like the red snapper (Kakap Merah).

There are also squid (cumi-cumi), prawn (udang), crabs (kepiting), a couple of enormous lobsters (udang raya), and many different species of clams and scallops (tiram). Crustaceans like crabs and lobsters are generally caught in the wild with different traditional techniques like traps or hand fishing. Prawns, the majority being Asian tigers (udang windu), raise a big question of sustainability as they are normally farmed in big artificial pools close to the sea, generally replacing mangrove areas, and creating problems within the community.

To avoid the presence of parasites and disease, these farms use a large amount of antibiotics that after a while can make the farm unusable, so a new one must be built, replacing more coastal mangroves. Prawns from intensive farming should be avoided, while traditional harvesting can be accepted, even if it’s quite difficult to understand their true source.

Trawl fisheries for wild-caught tropical and sub-tropical prawns account for 27% of the world’s fish bycatch: as much as 10kg is discarded for every kg of prawn brought to land. Bycatch includes the capture of endangered species such as sea turtles and dolphins. Cephalopods like squid normally are not overfished (with some exceptions): just check the real freshness of what you’re going to buy. I once had food poisoning from cumi-cumi a couple of years ago and it was a terrible experience.

The key for every consumer is to be aware of his impact on the world. If there were no requests for shark fin, our ocean would still be full of sharks. Consumers make the difference in everyday choices, even in the small Jimbaran market. An electronic guide to sustainable seafood in Indonesia is available on the WWF website:

Trying to get sustainable seafood is an important choice that can affect the future of our oceans. It’s just a drop in the sea, but if the request for endangered species is reduced, their catches will be reduced. A quick guide to sustainable seafood in Bali