If you were one of the reported 250,000 surfers visiting the Uluwatu cliff each year then at an initial glance there is not much to complain about. Cold drinks, hot food with massage and welcoming locals in front of an elite tropical surf spot that breaks flawlessly from one to 25 feet in size. What more could one ask for?

Time brings things to light and a group of concerned Uluwatu resident expat surfers did notice that the biggest issue here was beach pollution. What Uluwatu lacked was basic yet important amenities of any world-famous beach: working toilets and proper solid and liquid waste disposal. Of the 50+ shops and warungs/restaurants on the Uluwatu cliff facing the surf, none had proper waste treatment systems or trash disposal. In the past, all of the rubbish and liquids ended up in makeshift dumps in the woods near the beach or were literally thrown off the cliff into the ocean at the end of the day. In the pre-plastic era the mostly organic trash disposed of here was negligible but now with a quarter of a million people visiting each year it piles up fast. Reports of foul smells coming from the beach cave started becoming more and more common. Something needed to be done. 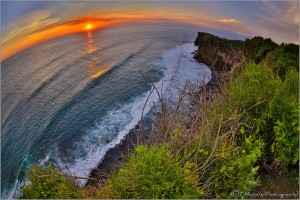 This group of expat surfers wanted the beaches and surrounding areas in their backyard to be cleaner and safer for everybody and therefore in June 2011 they formed the Eco Surf Rescue Uluwatu (ESRU) to address these issues. To say that just a handful of surfers run everything is wrong; the ESRU has several NGOs involved as well – the GUS Foundation, ROLE Foundation and ecoBali Recycling. The Indonesian surf industry is also backing ESRU and so are many local businesses. The local Indonesian and Balinese business owners now clearly understand the pollution problem and have shaped their own committee that is directly involved with ESRU projects.

Curtis Lowe is a volunteer project manager for ESRU and during a recent chat had this to say regarding Uluwatu:

“The biggest pollutant at Uluwatu in the past was rubbish, but ESRU, GUS, ROLE and ecoBali Recycling hauled out 40 tonnes of it from the ravine near the beach last year and now we have a collection and recycling system in place. ecoBali composts the collected waste and what’s left is sent to government dumps.”

“Today, the biggest pollutant would have to be liquid waste from the kitchen sinks and sewage from the toilets. The pipe put in by the warungs years ago is broken and so it drains directly into a cess pit in the ravine. We had a laboratory test the water in this pit, and the results were horrifying. There were high levels of E.coli (meaning there was raw sewage in it) and also high levels of chemicals and cooking oil. Basically, the water would make anyone who came in contact with it very sick.” 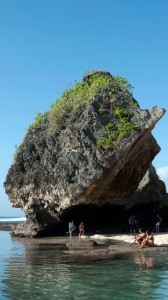 “The main ESRU objective besides rubbish collection and recycling is installing a waste water management system which all the warungs and toilets can be linked to. We’ve already started a used oil collection system where in partnership with Caritas Switzerland (an NGO), used cooking oil from Uluwatu will be converted into Biodiesel. Basically, the physical side of it is waste management, which is not very glorious. But, the other side of it is awareness, education, and community involvement. Pride in a clean Uluwatu is growing – and the locals will be the ones managing the project in the long run.”

To build and install the proposed liquid waste management system ESRU needs to raise US$50,000. To operate it will cost further. As more and more attention focused on the reality of Uluwatu’s pollution, support and money started to come in. Just over a week ago an ESRU charity auction supported by the Indonesian surf industry and Uluwatu Surf Villas made over US$12,000. Surf company Rip Curl has donated over US$5,000 to the ESRU cause through commissions off t-shirt sales. 11 time world champion surfer Kelly Slater auctioned his signed personal surfboard for AUS$8,000 donated to ROLE Foundation, a portion of which will go to ESRU projects.

Once up and running the ESRU project is an extremely useful liquid and solid waste treatment model that can spread to other popular Indonesian beaches not just for tourists but for generations of Indonesians as well. Hopefully the idea of a clean environment and how to do it will spread not just through Uluwatu but throughout Indonesia, too.

In closing, Lowe mentioned, “We’ve made big progress. No rubbish from Uluwatu goes into the sea these days, and in the future, no dirty water will either.”

For more about the Eco Surf Rescue Uluwatu or to donate visit their Facebook page or go their website: http://www.ecosurfrescue.moonfruit.com