Politics as a science is defined as the regulation and government of a nation or state, the preservation of its safety, peace and prosperity, the conduct and contests of parties for political means such as the administration of citizens’ affairs and advancing candidates to office. Another definition of politics is the artful or dishonest management to secure the success of political candidates and parties or political trickery. Politics – from the Greek politicos -“of, for, or relating to citizens” is the art of influencing people on a civic or individual level, when there are more than two people involved. Modern political discourse focuses on democracies – the relationship between people and politics.

Historically all political communities of the modern type owe their existence to successful warfare. The origin of the State, or Political Society, is found in the development of the art of military warfare. Political Scientist Harold D. Lasswell defined politics as, “Who gets what, when, and how.” Political philosophy is currently defined as, “responding to conflict with dialogue.” Worldwide political dialogue in bribery alone is estimated to be well over a trillion in U. S. dollars annually. A state of unrestrained political corruption such as unregulated lobbying by market monopolies is known as kleptocracy, literally meaning “rule by thieves”, thus the moniker, kleptomaniac.

Does democracy exist today in the world? I would say only at the community and tribal levels and in some few inconsiderable states. The Republics of The United States and Indonesia are referred to as democratic Republics. The basic definition of a republic is defined by the absence of a monarch as the head of state. Contemporarily it is a form of government with an elected president and elected representatives responsible to the people or a democratic republic. 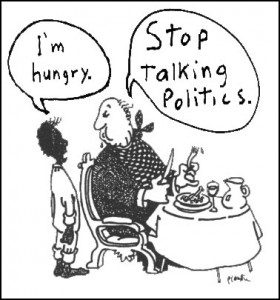 Thomas Jefferson; architect of The Declaration of Independence, had a dream that America be based on the direct democracy  practiced in Athens, Greece in the 5th century B. C. Today that democracy is nowhere to be found. Frustration with society and government leaves citizens feeling helpless. Look at America, Europe and South America, the list goes on. The only thing standing between liberty and tyranny is the freedom to participate in true democracy. This means a stable and democratic economy of local productive communities growing and consuming and trading freely in nature’s resources while maintaining a balanced natural environment. This starts “from the bottom up” – to quote Jakarta’s Governor, Joko Widodo, aka Jokowi. Indonesia is a natural candidate for this democratic democracy; a model of a true democratic state. Its Banjars and communities have yet to be divided and dispersed, but remain largely intact. Democracy starts at the grass roots level and, as issues start at the community level, they are then brought up to the State, with citizens well informed and well divested in their interests.

I chose to live here because I feel a certain freedom, a smile of the future yet to be empowered; a respect for family and community and nature. In Bali, once only focused on beauty and spirit, chaos, toxic fumes, road rage, low wages, debt, and desperation are poisoning the future. It’s politics.

Many Expats are in Bali because they are sick of the politics of fear and war in the West. The following quotes are an example of the many quotes I solicited. All chose to remain anonymous.

“I came here to get away from politics.”

“Politics is a joke.”

“Politics changed my life. I had to leave my country for over 20 years because I didn’t want to kill women and children in an illegal war.”

“I am a woman. We just got the right to vote 68 years ago and are still striving for equal pay and representation. America has never had a woman president.”

“Politics? You’ve got to be kidding! You mean legal corruption?”