According to a 2008 survey by Save the Children, up to half a million children live in residential care in Indonesia, a frightening number. It is even more frightening to think that many children living on the streets have not even been counted. For many of them it is a blessing that some devote their lives to taking care of future generations. Some give up their successful careers in the pursuit of giving these children a future they deserve. The pay-off for a career perhaps more successful than any other career can ever be.

This is where Ingrid van der Mark and her home for abandoned children, Lestari Sayang Anak enter the picture. After a successful teaching career she has decided to concern herself with nurturing children until they are independent. She had previously visited orphanages in Romania, India and elsewhere in Indonesia before she decided to quit her job and open an orphanage herself in South Jakarta.

She knew this was not going to be an easy path, but was convinced it is the right one. Besides her two beautiful, adopted daughters, who speak Bahasa Indonesia, English, and Dutch, she has seven orphans under her care. Still, it was relatively quiet at the orphanage when we arrived, because most of them have been attending school since this July. However, we were promised that we would be able to meet all of them during lunchtime. 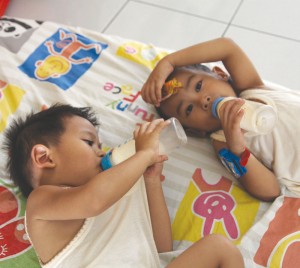 Most of the children have been under the care of the orphanage since birth, or otherwise from a very young age. Most of them were abandoned by their parents, either because the father ran away or the family did not have the resources to take care of the child. The sad truth is that most orphans in Indonesia actually have at least one living parent. Ingrid says she doesn’t understand why the children are so easily given away and abandoned.

Maternal instinct is a trait Ingrid has had from a very young age. While her sister was playing with Barbies, she was always staging scenes with her baby dolls as if they were real babies. Raising children and assuring their safety and future is what drives Ingrid. She does it, not because she wants to, but because that is the least these children deserve. A child doesn’t ask to be born, but it does ask for protection, food and education.

During our conversation, Ingrid’s husband fetched the children. He is as much involved with the orphanage as she is; they even live in the same house as all the children. After a short while the tranquillity was over and a joyful bunch came running in. We were sitting in the big living area, which is divided into smaller corners. The girls had their dolls and play kitchen, while the boys had Lego and train toys to play with.

Our interview became a bit more difficult when Lisa, one of her adopted daughters, was happily interfering. However, it was heart warming to see the joy emanating from her. That said, during and after lunch the cheerful bunch were jumping and laughing and seemed to be truly happy. According to Ingrid, the most important thing for the children is not only to have a place to call home, but also a place to feel home. I got the sincere feeling that this is exactly what these children felt when we were there, and that is wonderful.

I asked Ingrid if she would consider moving to another country to set up another orphanage. She did not hesitate when she shook her head. She could never leave the children here in Jakarta. Even though there are five other caretakers constantly busy with the kids, Ingrid feels the responsibility of being here, too. Also, it would be very difficult for her husband to move abroad. As an Indonesian, born and bred here, he would not like the idea of moving. Her goal is to buy or get some land outside the city where the air is cleaner and the roads less congested, and build various houses on it for different age groups. Every house would be occupied by a maximum of ten children, not overcrowding the available space. 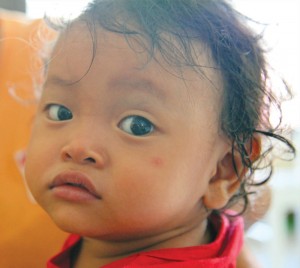 Most of the orphans have been under Ingrid’s care since they were babies. They grow very fast and this is why there is now place for four more children, babies mind you, because the previous children’s cribs are not used anymore. However, when these cots become filled, the house will be full for a while and I understand the decision not to grow any further.

Running an orphanage is financially no easy feat. Ingrid is very lucky with her family, who support her because she doesn’t have a fixed salary. Sponsors help out with the orphanage through donations and by volunteering. Also, each of the children has his/her own sponsor who donates a fixed monthly amount which goes directly to the child. Sometimes travellers contact Ingrid if they can come and play with the children for a day, business people and tourists alike.

Lestari Sayang Anak means Forever Loving Children, and forever love they get. Ingrid left her career to set up this home because money can never make one as happy as the smile of a child.

They are always looking for food, clothes, toys and financial support for the children. Sometimes parents visit the orphanage bringing their own children with them, spending the day playing with the kids at the home while their own toddlers mingle around with their peers.

A Prosperous Year of the Rabbit at Hotel Indonesia Kempinski Jakarta