The neologistic acronym LGBT has been hitting Indonesian headlines this month, as the nation continues its ill-advised trudge towards good-time, thigh-slapping, fun-aplenty, Saudi-funded, Wahabist religious totalitarianism. This time around, in a laughably paranoid development, the faithful firebrands have dipped their toes into the same lake of righteous indignation in which former Communication and Information Minister, Tifatul Sembiring, once used to enjoy his morning dip. 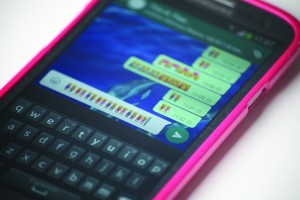 Specifically, emojis (those little pictures that you can add to your Whatsapp, Facebook and Line messages) have had a fatwa put on them for depicting gay families. This, it is claimed, offends Indonesian culture, violates the sanctity of the nation’s core beliefs, will cause the nation’s youth to change their sexuality overnight, will bring about a new 10,000-year reign by the dark lord Satan, et cetera et cetera.

Now, just as an aside, I think we should clarify here that emojis are the tiny pixelated pictures mentioned above, while emoticons are those smiley faces that people construct out of brackets, colons, semi-colons and the like. I just mention this in passing, as most media reports of the current furore seem to have confused the two, thus revealing themselves to be appalling Luddites, as opposed to the slick-fingered, anonymous-style hackers that we really need in order to take on Indonesia’s digital fundamentalists.

Regrettably, the makers of the LINE messaging application have now caved in to the pressure and have removed the offending pictures from their interface. Bah humbug. I mean, the general public here is pretty anti-LGBT in general, however for the government to officially sanction such intolerance doesn’t bode well for a future of fraternal charity and pluralism. And all of this comes on the back of Research, Technology and Higher Education Minister, Muhammad Nasir, declaring that openly gay students should be banned from University campuses, despite the fact that homosexuality, in and of itself, is not illegal in Indonesia.

This would seem to be the great Indonesian paradox rearing its ugly head once again. This is a country as ethnically diverse as you will find on the face of the planet, yet it struggles with a stultifying conformity that is no doubt a hangover from its recent authoritarian past. As soon as the great dictator was toppled, many here almost immediately decided to emasculate themselves once more through devout dogma, as opposed to teasing out the possibilities that freedom had to offer.

And so, while neighbouring Vietnam legalizes gay marriage, Indonesia, as per usual, drags its heels and casts its eyes heavenwards, not realizing that the stories contained within holy books work by allegory, simile and metaphor, and are thus supposed to encourage debate and reflection, as opposed to setting out a list of stringent dos and don’ts similar to those pinned up on the door of a Javanese hotel room.

Despite homosexuality being generally frowned upon in Indonesia, the ‘T’ in LGBT, which stands for lady boys (commonly known here as bencong, banci or waria) are generally treated as figures of fun as opposed to moral degenerates to be persecuted, harassed and generally not invited over for cocktails (although this also applies).

In fact, this socially marginalized but ultimately accepted she-male pantomime has roots (careful, Simon) way back in the murky depths of Indonesian history and the beginning of oral (careful again, Simon) and written records.

Among the Bugis people of Sulawesi, for example, there were once cross-dressing palace guards known as bissu, who predate the arrival of both Christianity and Islam to these shores.

These days, Jakarta’s transvestites/transsexuals are well known for plying their trade up in the Taman Lawang district which, perplexingly, far from being located on the cheesy side of town, sits in the posh, leafy, gentrified environs of Menteng.

It’s a tough life for homosexuals here though, that’s for sure. This is a country where hypocrisy so often rules the roost, and where the obligation to engage in heterosexual marriage sits alongside rampant prostitution, domestic violence, child marriage, and massage parlours by the thousands frequented by fine, upstanding heterosexual men who then return home and infect their good lady wives with HIV. Hypocrisy for sure, and I should stress here that it takes one to know one. As an Englishman, I’ve often had to pause to reflect on one of Oscar Wilde’s pithy quotes: “And what sort of lives do these people, who pose as being moral, lead themselves? My dear fellow, you forget that we are in the native land of the hypocrite.”

Oscar was gay of course, and so was fellow Englishman Alan Turing, the father of modern computing, who also met an untimely end owing in large part (just stop that now, Simon!) to his sexuality. These days, thankfully, many citizens of planet Earth are able to enjoy a more tolerant social milieu, and Apple’s Tim Cook recently became the first openly gay chief executive of a Fortune 500 company. And, of course, the technological visions of Alan and Tim bring us right back to those pesky emojis once again, and those chauvinists who want to have their global-information-age cake and eat it.

Things have indeed changed massively over the last couple of decades with regards to LGBT issues. Indeed, the emoji depicting a family of two mothers and two children reminds me of my own cousin Ruth, who married her girlfriend a couple of years back and who now has two children to show for it (they each bore one apiece). This would have been unthinkable a generation ago. They now all lead happy flourishing lives, which are no doubt as tediously domesticated as those lived by the rest of the family. This reminds me of the only gay joke I know:

I don’t expect Indonesia to achieve such a rapid social transformation in the near future alas. Indeed, we may have to wait for a cold day in Yogyakarta before the Javanese equivalents of my cousin and her Mrs. and kids can live proud, unmolested lives. Mind you, it’s not entirely about Islam versus the West here, as America’s ‘talibaptists’ prove.

As for now however, things are far from perfect, and not just here. Indeed, the anti-gay witch hunts of Indonesia have their mirror image in the anti-anti-gay witch hunts that the narrow straightjacket of strict identity politics have thrown up across some British and American University campuses. Free speech is the first victim in both cases, although only the former is tainted by ugly violence.

First they came for my emoji then they came for me. Well, take heart folks, as some of those fundamentalists are perhaps just a little too suspiciously rabid in their homophobia. By way of analogy, cartographer of the unconscious mind, Sigmund Freud, noted how the scientist conducting experiments on animals and the antivivisection campaigner may both have a similarly repressed fascination with the same acts. So, let’s just free our unconscious minds, man. From the Taliban to Tom of Finland within a generation, are you up for the challenge, darlings?