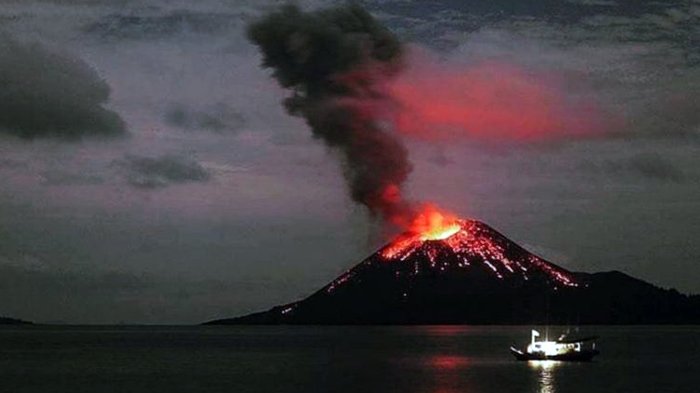 An Indonesian tour boat had an extremely close call as it narrowly escaped being wiped out by the erupting Krakatoa volcano, which flung hot ash and rock towards onlookers.

A video shows the volcano, known as Anak Krakatau, Indonesian for ‘Child of Krakatoa’, spewing a huge ash column before throwing rocks into the water.

Large splashes can be seen just metres from the tour boat, as onlookers can be heard expressing their shock in the background, with one saying “oh my word” and another exclaiming “woah!”

The footage, taken October 15, was shared on Twitter with the caption: “Close call! Anak Krakatau erupts and nearly wipes out a tour boat. October 15.”

One user described the splashes as “car-sized lava bombs”.

Another added: “It’s time for Indonesia to get a weather break for sure…”

Indonesia’s island of Sulawesi has experienced a tsunami, earthquakes and volcano eruptions over the past month.

The Anak Krakatoa volcano is located to the west of Sulawesi, just off Java’s coast.

Near Abepura, the inland regions were first hit by the 4.7 quake, followed by a 5.1 earthquake, which raised tsunami fears.

However, the US tsunami monitoring centre tsunami.gov has issued no warnings following the earthquake.

The First 1,000 Days: A Child’s Window of Opportunity