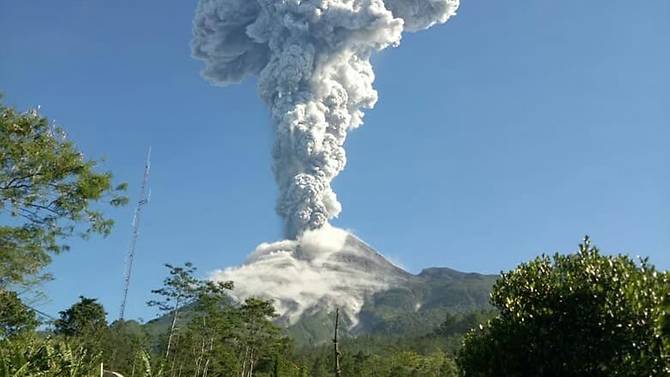 Mount Merapi in Yogyakarta erupted twice overnight on Friday June 1, prompting dozens of residents still living inside the 3-kilometre danger zone around the volcano to flee their homes.

The Center for Research and Development of Geological Disaster Technology (BPPTKG) said the first eruption occurred at 20.24pm and another 36 minutes later.

Friday night’s eruption prompted 98 people to flee their homes on the slope of Mount Merapi and take refuge in the nearby Glagaharjo village, Makwan, head of emergency and logistics at the Sleman District Disaster Management Agency, said on Saturday, as quoted by Antara.

They were among the last people still remaining in the danger zone despite warnings from the authorities to leave the area.

The volcano has become increasingly more active since May 11, spewing columns of ash hundreds of kilometres into the sky and disrupting flights to and from nearby Adisoetjipto International Airport.

The National Disaster Management Agency (BNPB) said all the eruptions so far had been phreatic, which means that they were caused by heated steam inside the cauldron, as opposed to magmatic eruptions, which include lava ejection.

The agency has raised the danger level to the second highest level since May 22, warning residents against staying in the danger zone.