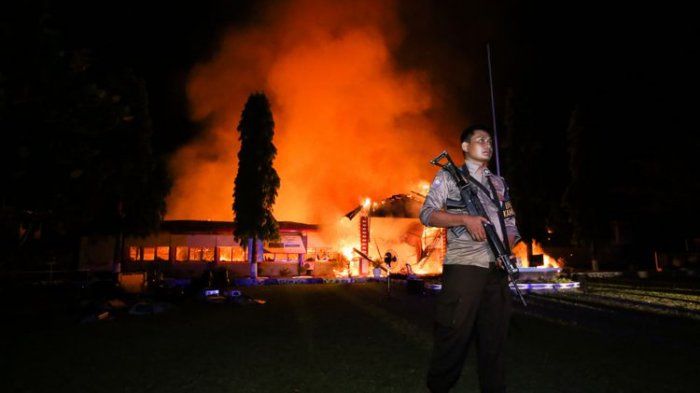 The Indonesian government said on Monday, October 1 that as many as 1,200 inmates have escaped from three detention facilities in the devastated region of Sulawesi following an earthquake and tsunami disaster.

The mass prison break happened after the powerful tremor sparked a wall of water that devastated the small city of Palu on Friday.

Ministry of Justice official Sri Puguh Utami said inmates had fled from two overcrowded facilities in Palu and another in Donggala, an area also hit by the disaster.

“Things were initially fine … but not long after the quake, water erupted from under the prison yard causing prisoners to panic and then run onto the road,” said Ministry of Justice official Sri Puguh Utami, adding that the water was not from the tsunami.

“I’m sure they escaped because they feared they would be affected by the earthquake. This is for sure a matter of life and death for the prisoners,” she said.

One prison in tsunami-struck Palu city – built to hold just 120 people – saw most of its 581 inmates storm past guards and escape to freedom through walls collapsed by the massive 7.5 magnitude shake.

Inmates from the other facility in Palu fled by breaking down its main door.

The facility in Donggala was set on fire and all 343 inmates are now on the run, Utami said.

The arson was thought to have been sparked by angry detainees demanding to see their families.

“They panicked after learning that Donggala was badly hit by the earthquake,” Utami said.

“Prison officials did negotiate with prisoners about allowing them to go to check on their families. But some prisoners were apparently not patient enough and committed the arson.”

Some of the convicts were jailed for corruption and narcotics offences, she said.

Just over 100 prisoners at the two facilities in Palu are still in jail, but the prison is now severely understaffed and the guards are struggling to keep them fed.

“The prison no longer has enough food,” Utami said.

“Officials then tried to buy supplies from stores around the prison that were still open.”

Five people convicted of terror-related crimes had been moved from the prison just days before the disaster.

The death toll from the twin disasters has surpassed 800 and was expected to rise further, prompting authorities to announce mass burials in a desperate attempt to stave off disease.

As shattered survivors scoured make-shift morgues for loved ones, and authorities struggled to dig out the living or assess the scale of the devastation beyond the city of Palu, grim warnings came that the eventual toll could reach thousands.