List of Top 10 Endangered Animals and Species in Indonesia.

Animals are the big losers as Indonesian tycoons continue to profit by destroying forests. See here below a list of the most endangered animals and species in Indonesia. Adult males have a single horn and females have none, unlike the two-horned African and Sumatran rhinos. Once common in Southeast Asia, they now exist only in Ujung Kulon National Park on the southwestern tip of Java. This tiny habitat leaves them susceptible to disease, in-breeding and the threat of natural disasters. They have long been hunted as big-game trophies and poached for their small horns, which are prized in China as an aphrodisiac by stupid men with flaccid penises. No poaching reported since the 1990s. 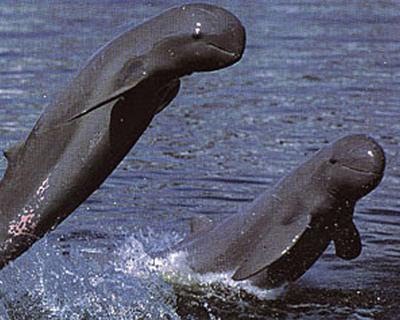 Unlike ocean dolphins, these river mammals lack beak-like snouts. Their heads are much rounder, and their dorsal fins are small and rounded. They live in a 200km stretch of the Mahakam River and adjoining tributaries and wetlands in East Kalimantan. Pollution and siltation from the palm oil and mining industries are causing habitat degradation. Many have been killed in mesh fishing nets, while overfishing has reduced their food supply. They are sensitive to noise from motorboats and coal barges. Some have been caught live and sold for display in aquariums. Another endangered animal is the world’s smallest rhino species. Known for their two horns and hairy bodies, they once occupied vast areas of East Asia but are now confined to a few pockets of Sumatra and Kalimantan. Deforestation and poaching are driving them to extinction. 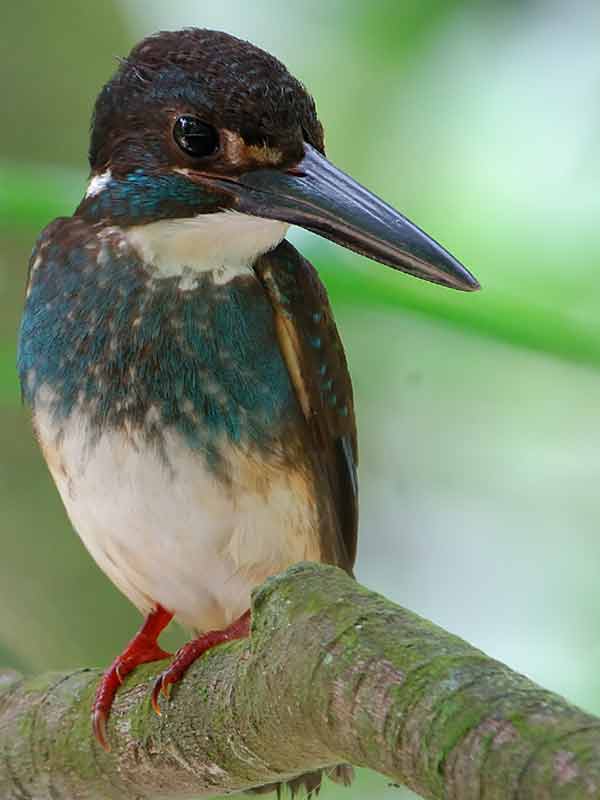 Classified as a distinct species only in 2014, this small, shy bird is critically endangered due to ongoing forest destruction for agriculture and development. It has been spotted in the protected Gunung Halimun National Park in West Java. It lives in lowland forests, feeding on fish, insects and small reptiles.

Reproduction: Females produce one or two eggs per clutch. Not protected in Indonesia, despite being among the world’s rarest (and most endangered species) reptiles. Classified only in 1990, it is one of only two turtle species endemic to Sulawesi. Also known as kura-kura paruh betet (parrot turtle) because of its beak-like mouth. Conservationists say up to 3,000 were exported annually throughout the late 1990s – mostly to China as a delicacy and to Europe and America as rare pets. By 1999, the number of recorded exports had fallen to 100, possibly due to security factors. Grows up to 30cm in length. Their habitat is being lost to deforestation. They are still captured for food and for trade as pets.

Reproduction: Single fawn born after a gestation period of 7.5 months.

Also known as the hog deer, it is endemic to Bawean Island off the northern coast of East Java. Protected since 1979, its biggest threat is an invasive American weed known locally as kirinyuh. Mostly nocturnal, the deer live in forests in two remote parts of the island. They usually graze on grasses, herbs and shoots, but the invasive weed is prompting them to enter crops to feed on corn and cassava leaves. This can lead to conflict with farmers. Teak plantations have also reduced habitat, but the population is regarded as stable. The sole surviving species of Indonesian tigers, following the extinction of the Javanese and Balinese tigers. Only about 150 breeding pairs are left, and the remaining protected forest areas in Sumatra are deemed insufficient to maintain viable populations, as tigers require a large home range. The greatest threats to survival are poaching, and deforestation by the palm oil, pulp and paper industries. Endangered animals like tigers sometimes strike back, killing illegal loggers and plantation workers. Some Indonesian tycoons and generals keep stuffed tigers as status symbols.

Reproduction: Usually just one baby after a gestation period of nine months.

Classified only in 2017 as a distinct species from the Sumatran orangutan. They live in a mountainous forest range of about 1,000 square kilometres, south of Lake Toba in North Sumatra province. Only eight percent of their habitat is classified as conservation forest, while 76 percent has protection status and 14 percent is unprotected. Habitat destruction started with farming and logging, but palm oil producers are now the main agents of destruction. Mothers are shot or hacked to death with machetes, so infants can be captured and sold as pets, although most die before reaching the market. Also known as the silvery gibbon. Mostly confined to medium elevation jungles in Banten and West Java provinces, but also present in Central Java. Habitat loss continues, partly due to housing and tourism projects. Adults are hunted, so the young can be sold as pets to halfwits.

How many left? Unknown

Endemic to Batanta Island and nearby islets – in the area better known as Raja Ampat – located off the northwestern tip of West Papua province. The unique blue patterns on their black scales could be these lizards’ downfall, as they are in high demand among reptile collectors. A single lizard can sell for US$1,000 or more. Almost 3,000 were recorded to be exported from 2003 to 2013. They grow up to one metre and their long tails are prehensile – meaning they can grip onto trees. The tail can also be uncurled in a whipping motion as a defence mechanism. Lives mostly in trees and eats insects.

Five Tips for Dating in the Age of the App