“Music melts all the separate parts of our bodies together.”

When it comes to cross-cultural amorous relationships, cavorting male artists have gotten most of the attention and a bad rap to boot. While trysts between women and the locals are rare, or at least have been little spoken of, the truth is that just like the rite of passage of Australian and Japanese girls and Balinese lovers, they do exist. If you dig deep enough, there are a significant number of cases of older western women with young local studs. 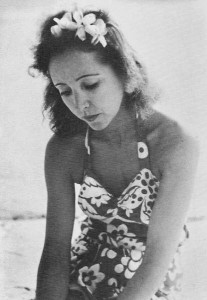 Anaïs Nin, the Franco-Cuban feminist who was the lover of Henry Miller and author of groundbreaking erotic books, dealing with hitherto taboo subjects, best describes the sensual allure of Balinese males to western females – “Men…have honey-coloured skins, glossy black hair, and dazzling smiles”. Apparently Anaïs was focused upon one particular man, Subudi, a handsome young guide who accompanied her day (and night) during a visit she made to the island in the early 1970s. In, “Spirit of Bali”, published in the January 6th, 1975 edition of New York City’s avant-garde newspaper, the Village Voice, she longingly describes her companion who apparently sought to please her in every way: “Subudi with his oriental slanted eyes, his good profile, his dazzling white teeth, his soft black curled hair…He was like the Spirit of Bali itself, like the bamboo xylophone, delicate and muted…His gentleness and soft ways…stayed with me”.

Ms. Manx or K’Tut Tantri (only two of her many pseudonyms) was an earlier aficionado of Balinese studs. Although she portrays herself as a chaste innocent girl constantly being wooed by an endless line of Balinese suitors, including several handsome princes in her controversial biography, Revolt in Paradise, in reality she seems to have had a libertine attitude towards cross-cultural sex. According to internal colonial government reports made to expedite her deportation she was a “…woman of low morals…a nudist”. 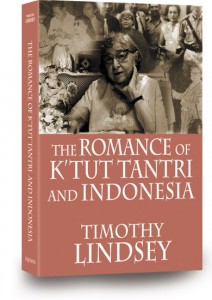 While these may have been biased by the Calvinist attitudes of the Dutch bureaucracy, any suggestion of platonic relationships is shattered by her casual remark to the Italian artist, Emilio Ambron, that “at my age and with my looks you take your pleasures where you can get them”.  In a recent book The Romance of K’tut Tantri by Timothy Lindsay, one chapter is titled “Playgirl or Resistance Fighter?”

As today, many expatriates in Bali before the Second World War, including Ms. Manx, had apparently come to the Island of the Gods in search of an identity and income. The favourite default categories in the era were artist or writer and she chose the former (she would only reincarnate herself as an author after the war).  Few of her paintings have survived and those that have raise little more excitement than a yawn. Some people were polite and others simply described her paintings as untalented.

Persistent in every way, she tried to ingratiate herself into the elite circle of Spies, who once described her as awful. Ambron, who described her as the ugliest and most detested expatriate woman on the island, found her blunt, manipulative character amusing in small doses.

Others were less fortunate. Robert and Louise Koke, a talented photographer and painter, met her soon after they checked into the luxury Bali Hotel in Denpasar.  Robert was an athletic and dashing young chap who worked in Hollywood when he met his beautiful unhappily married soul-mate, Louise. After their torrid affair was exposed, they fled to Asia in 1938 with no plan other than avoid the scandal and have fun. Their arrival in Bali was a complete fluke. After arriving in Hong Kong they went to Thomas Cook to book a trip to Angkor Wat. The agent recommended the hottest new destination – Bali – because it was rainy season in Cambodia.  One glance at the exotic photos of the island of bare breasted beauties was enough to win them over.

A week later they found themselves on the veranda of their room at the luxurious Bali Hotel when Ms. Manx introduced herself as an artist and Bali expert. At the time Manx was one of a host of expatriates cruising the hotel and tourist haunts in hope of bumping into a naïve newcomer to whom they could hawk anything from an “insider’s tour”, cheap accommodation and, of course, art and antiques. She found a receptive host in the Kokes who fell in love with the island and decided to build a fantasy South Seas beach hotel to compete with the staid European atmosphere of the colonial establishments.

Manx, in a sense became the island’s first expatriate real estate agent. She took Robert and Louise on a tour. When they reached Kuta Beach, somewhere near today’s Peanuts Club, Robert, who had became an avid surfer after working as an assistant director for the King Vidor film “Bird of Paradise” (1932) starring Dolores del Rio, became the first man to notice that the beautiful waves breaking on the Kuta Reef were world class. Everyone was so happy that they asked Manx to join them as partners in the project.

The story of him ordering surfboards and the building of Kuta’s first hotel is the subject of Louise’s entertaining book “Our Hotel in Bali”.  Written in 1942, but published after the war, it tells the entire story but with no mention of Manx. The reason for Louise’s silence is twofold. While they were in Java arranging their visa, Manx attempted to unsuccessfully seize the property for herself. They were so traumatized by her betrayal that they expurgated her from their memory. Secondly, their lawyers warned them that K’Tut, a nasty work with connections and a bad reputation, might bring litigation against them. 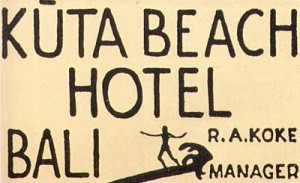 Robert would only speak about the matter when I interviewed him in 1994 when he came to Bali to donate his photos and Louise’s paintings to the Neka Museum in Ubud. Physically frail and nearly blind, but with a mind and memory as sharp as a razor, he described Manx’s antics with Balinese boys eager to check out the physical attributes of a European woman even if she was an ugly old tart.
The Kokes were not the only ones with an axe to grind with Manx. After the Japanese invasion, Manx developed an extremely close relationship with the Japanese and was even said to live with one officer. According to Maria Hofker, Manx approached her and offered help as the situation got worse and it looked more likely she and her husband Willem would be sent to a prisoner of war camp. Maria gave her a cache of her husband’s paintings to safeguard. Later they discovered she carried them to Surabaya, removed Hofker’s signatures, affixed her own and held an exhibition of her latest work which she sold to the Japanese officers.

The more tawdry colonial literature is riddled with stories of western women falling in love with natives usually with disastrous results – embarrassing pregnancies, being sold into slavery and death. While less prominent and less known, the magnetic attraction of the forbidden has smitten both sexes. While it all seems quite normal nowadays, the old stereotypes seen in the paintings of Ashley Bickerton are still alive and well.

Join the Online Talent Search, the Next Big Indonesia Stars