The word Earth is synonymous both with the Globe, the third planet in our solar system, and the stuff that lies beneath our feet often referred to by the less prosaic name dirt. Earth comes in myriad forms and colours. As far as art is concerned, the most important of these is Clay, a type of earth that results from a mixture of metal oxides, organic materials and water that result in both cohesiveness and a plasticity that allows it to be easily moulded into fantastic shapes. This characteristic would be of no real consequence except for the remarkable chemical reaction that occurs when it is heated. While you can make beautiful things with clay, they are highly fragile and impermanent. Water and the elements quickly return it to its original lumpy state. 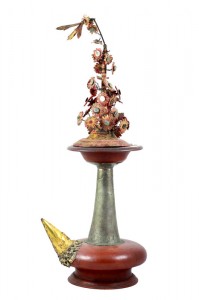 Add fire and you get Magic. Terracotta, or cooked earth, is cheap, plentiful, beautiful and impervious to water. Treat it right and it can last for thousand of years. You can make bricks, statues, water pipes, roof tiles – the list goes on and on. Of course it is brittle, but in spite of its fragility it can last for thousands of years. The oldest terracotta known to man belongs to Djomom Culture of Japan and was fired over 14,000 years ago. It was used not only for utilitarian purposes – cooking and storage vessels – but also ritualistic statues that are now regarded as masterpieces.

In Indonesia terracotta goes back at least 5,000 years to the Late Neolithic period. Here, too, it was used to make pots and vessels. As in Japan, elaborate beauties used in rites connected with ancestor worship also soon appeared. The art of terracotta is found throughout the Archipelago. Water vessels, ritual, symbolic and practical, were of especial importance. Many display distinct forms that make it easy to know their place of origin.

By far the most important of these are kendi, a unique spouted drinking vessel used to hold liquids. Some scholars believe that kendi originated with an Indian water vessel known as the kundika. Usually held by Batara Guru, an incarnation of Siwa, it can be seen in 9th century Javanese statues. Kendi were not only wonderfully shaped, but also served a practical purpose in the Hindu period because they could be shared by peoples of all castes and ranks because the liquid never touches the lips of the drinker but is rather poured into the mouth via the spout, thus avoiding spiritual pollution. They are so endemic and so unique, it is difficult not to classify them as an important original form of Indonesia art. 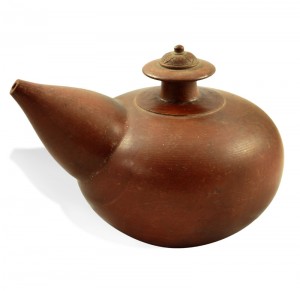 Kendi susu, or breast kendi, were made in the 14th century at the height of the Majapahit Empire of East Java. They are so named because of their large bulbous spouts, which resemble female human breasts. The great numbers of kendi susu found over the years proves their immense popularity. Their hues vary from a deep red, to pale white examples formed of kaolin, a refined clay used for making porcelain as well.

In comparison to kendi susu, prehistoric water vessels found in Sulawesi, Sumba and elsewhere have long necks. The best known of these is Melolo ware. Named after a village in East Sumba where they were first found, subsequent digs have revealed that they are found throughout Sulawesi and the Lesser Sundas. The best of them have human figure finials.

Balinese and Lombok kendi also have long necks and distinct shapes. In Bali they are frequently decorated with sumptuous additions including gold or silver spouts in the shapes of naga (dragons) with gaping mouths out of which the water is poured. These are used for the storage of holy water (tirta) created by high priests to bless and purify. The Balinese also carve sumptuous tops with images of the tree of life, animals and even humans. These are painted with cinnabar, natural pigments and covered with pure gold leaf. 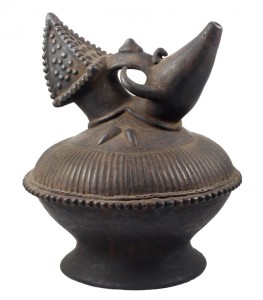 On the opposite side of the Archipelago in Lampung, the pepper-rich most southern province of Sumatra, kendi often have multiple spouts. They are also shaped like the horns of water buffalo and incised with swirling designs as well as elaborate animal and human figures.

Kendi were so universal and popular that the rulers of various Indonesian kingdoms began ordering porcelain and ceramic versions from Swankalok, Thailand, Annam, China and Japan. The best-glazed versions were painted with graceful designs of birds and landscapes. Some were blue and white, but others were multi-hued and whimsical. With their love of gold, Indonesians would decorate them with jewel-like covers and ornaments. Notably while made abroad, these objects were made strictly for export to Indonesia and Southeast Asia. While glazing, which originated in China, eventual spread to other countries in South and East Asia, the technique was never imported to Indonesia until much later, in spite of the Indonesian love affair with porcelain.

One of the greatest collectors of kendi was Indonesia’s third vice-president Adam Malik. Born in Sumatra of Batak extraction, Malik was a pioneering journalist and co-founder of the Indonesian news agency ANTARA. He served only one term as vice-president probably because he was too outspoken for Suharto. Malik was also an avid and sophisticated collector who amassed more than 50,000 objects during his long and prestigious career. He had a special fondness for ceramics and especially for kendi. His treasures were displayed for many years in Jakarta in one of Indonesia’s best private museums. He also co-founded the Ceramic Society of Indonesia, which was responsible for publishing over 14 books on various subjects. One of the best of these is Kendi (1987), penned by Sumarah Adhyatman, the chairperson the Ceramic Society and an acknowledged expert on the subject. Sadly after Malik’s death the contents of the museum were sold off piece meal by its heirs and scattered the globe over. Empty for many years it closed its doors in 2006. Love Earth, Shape Earth, Fire Earth and Change the World. If you want to liven up your next party serve drinks from a Kendi.