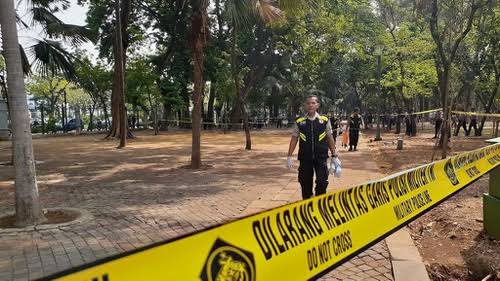 A smoke grenade has exploded at Indonesia’s National Monument park, near the presidential palace in central Jakarta on Tuesday 3rd December 2019.

It is reported that President Joko Widodo was not at the palace at the time of the blast.

“Our team’s finding at the location is that the explosion came from a smoke grenade,” Jakarta’s police chief, Gatot Eddy Pramono, said.
The explosion injured at least two military officials. Serka Fajar was holding the grenade when the explosion occured. He received injuries to his left hand. The second victim was Praka Gunawan, who took injuries to his right thigh. The two injured military officials were taken to the hospital RSPAD Gatot Soebroto.

Jakarta’s military chief, Eko Margiyono, said that the two injured officers were doing exercises in the park at the time. Every Tuesday, military personnel who are based in Jalan Merdeka Timur do exercises in National Monument Park. Police are investigating if the explosion is the result of an attack.

The explosion was located inside the National Monument complex, opposite the Ministry of Home Affairs in Jalan Merdeka Utara.