While the novel coronavirus pandemic has forced just about all Jakarta bars to close down temporarily, the celebrated D’s Place bar in Blok M, South Jakarta, has announced it is now closed permanently.

“Sorry to inform everyone that D’s Place has now officially closed and will not re-open. Thank you for all the memories and to all our customers throughout the years. It was a blast,” said a message on the bar’s Facebook page on Wednesday (May 27, 2020). 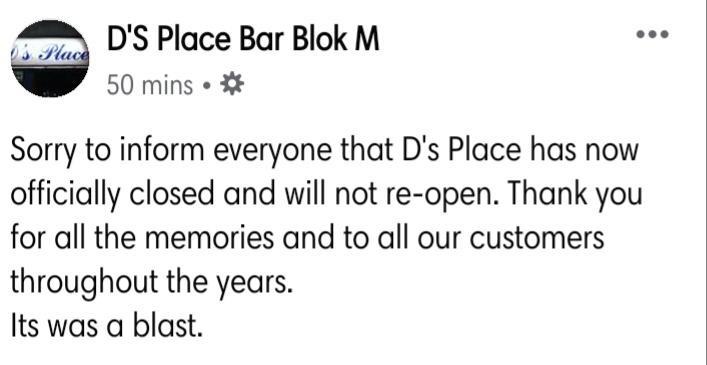 The closure of D’s Place signals the end of an era for Blok M’s notorious Jalan Palatehan, a street that thrived with bars catering to the needs of single expat males from the late 1970s to the early 2010s.

D’s Place opened in 2001, founded by Englishman Darryl Patton, who had pioneered the nightlife scene in Blok M, starting with the Tankard pub in 1976, followed by the long-running Tambora nightclub in 1978. Popular bars on the Blok’s Jalan Palatehan included Oscars, Sportsmans, Pentagon and Top Gun. There was also Lintas Melawai nightclub, across the other side of the Blok, and the Club, near the bus terminal exit. All of them are gone now, Top Gun closing its doors in 2017.

Owned by a group of shareholders, D’s Place was initially managed by Darryl and his younger brothers, Paul and John. It immediately became the most popular bar in the area, and later spawned imitators, such as My Bar (still open), G-String Cafe (closed 2011) and most recently, Enzo’s Lounge and Sports Bar.

In the early years of D’s Place, you had to queue for a drink, but the ever-generous Patton brothers would likely provide your first drink on the house. It was a magnet for single men seeking female company. It wasn’t entirely a pick-up bar though. There was live music, dancing competitions, music quiz nights presented by John Patton and even pub quizzes presented upstairs by the late David Jardine, one of the more eccentric characters of Jakarta’s expat set.

While prudes might dismissively deride Blok M’s bars as dens of iniquity, D’s Place was never a venue for darkness, drugs and deafening music. It was an oasis for those seeking a tasty meal, convivial drinks, and physical company. That doesn’t mean the ladies there were victims of sex trafficking; rather, they were freelancers. D’s Place and its denizens even inspired one of Indonesia’s best written early blogs, the sadly long-defunct Jakarta Blok M site authored by Malcolm Johnson.

The glory years couldn’t last forever. Darryl sold his stake and D’s Place relocated a few meters down the street to slightly smaller premises. There, it opened a popular back bar, reputedly where patrons replete with cerebral alcoholic stimulus could seek a more oral form of stimulation and discuss hedge funds.

Regulars of the Blok M bar scene have long lamented the nightlife was dying, partly due to socio-economic changes and technological advances. A prolonged downturn in the oil, gas and mining sector in Indonesia meant that part of the customer base started leaving and would not return. Meanwhile, the rise of online dating apps and a soaring number of bars in Jakarta meant that a new generation of expat males was less likely to be drawn to Blok M. Instead, they could swipe their phone in order to find a partner for sexual activity.

The mandatory closure of Jakarta bars in March 2020 as a result of coronavirus, only hastened the inevitable.

“The Blok had died a while ago, probably the closure of Top Gun was the final nail,”

says Rob Davies, one of the shareholders of D’s Place. He feels not enough people were visiting the remaining bars to keep the place viable.

“Operating bars in Indonesia is a big challenge for a lot of reasons and in reality, most of our customer base has left Indonesia and is unlikely to return. The new breed of expat are not the same as the pioneers of old who relished the thrills of living in a cowboy town.”

What are your thoughts and memories of D’s Place? Let us know in the comments below.