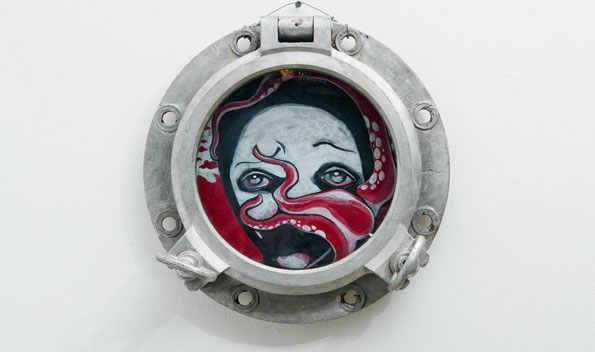 According to Naomi Samara, a young Indonesian artist and native of Sanur Beach, Bali, the island is brimming with young, upcoming new talent waiting to burst into a creative frenzy if presented with the right opportunity to express themselves in myriad and unexpected forms. Admirably she has taken it upon herself not only to further her own career but also to explore new paradigms on the Bali arts scene beginning with the founding of Swoon, a small and unique gallery featuring “playful, provocative works by predominantly young local and international artists” named after a pleasant sound associated with being swept off your feet by love.

A third generation member of the legendary Wawo-Runtu clan, Naomi was raised in what she describes as “a creatively rich environment, by a family of extremists and eccentrics…” The patriarch of her clan was none other than the Wija Wawo-Runtu, who is best known for founding the famed Tandjung Sari Hotel, arguably the first tropical resort in the world from which all others have sprung. The durability of his vision was just celebrated with the resort’s 50th anniversary.

Before becoming a tourist entrepreneur Wija was a Bohemian studying filmmaking in London and after returning to Indonesia in 1952 with his English wife, Judith Bell (Naomi’s grandmother), designed interiors for homes, hotels and embassies in Jakarta during the heady days of the early Indonesian Republic. Naturally charismatic, wherever Wawo-Runtu led, artists, eccentrics, collectors, jet setters and celebrities followed. Judith, too, was a talented painter and designer whom Naomi acknowledges as an important early influence. Wija’s aunt, Emiria Soenassa, was the only woman in Persagi, Indonesia’s first modern art movement Persagi founded in 1938. One of Wija’s best friends was the noted Australian expatriate artist and collector, Donald Friend. Paintings from both and numerous other artists decorated the walls of the family compound. Ade Wawo-Runtu, Naomi’s mother, co-founded Jenggala, Bali’s first and still premier ceramics atelier, with Brent Hesselyn and help setup one of Sanur’s best-loved landmarks – Café Batu Jimbar.

While growing up in such an environment can be stimulating, as many children of successful parents have remarked, it also carries a burden especially for a young woman as fiercely independent as Naomi. While her education began in a simple Balinese village school with a strict repetitious curriculum, she would end her educational trajectory with a degree in Arts and Design from the prestigious Royal Melbourne Institute of Technology (RMIT) followed by one year in Fashion Design. While she was anxious to return home after years in Australia, the return to Bali brought numerous challenges. Determined to become an artist she struggled to achieve her goal in a meaningful way which was no simple task in a transient tourist destination often dubbed “island of artists”.

Firstly and ironically much of the so-called art touted in Bali is tourist schlock – repetitious, derivative and commercial. While a handful of serious galleries existed these are dominated exhibitions of paintings by artists with established commercial success. So, too, the curatorial level in Bali is excessively conservative with an emphasis on fine art, a term declared irrelevant since the rise of post-modern art in the 1970s. In general there is widespread confusion, vicious competition and few opportunities for young artists especially if they were unwilling to fit into the standard commercial categories.

“Contemporary art should not be limited by the boundaries of a canvas”, Naomi states. “Art is many faceted and encompasses manifold disciplines and technologies including fashion, computer, web, graphic design and social media, which all overlap each other today”. In some ways Naomi envisions a revolution of sorts that begins with a paradigm shift in attitudes, perceptions and expectations. Her concepts are small, versatile, multi-faceted, out of the box and include installations, clothing, objects, sculptures, drawings and paintings exquisitely presented, wrapped and modestly priced.

Her own artwork is a quirky cocktail of emotions, sexuality and identity. So, too, they mirror an image of herself as “an observer of grand collisions and unifications between personal worlds…” Working in pen and ink with some colours, she displays a fine line and attention for detail strongly influenced by fashion design. Her subjects are inevitably troubled young females suggesting intense self-analysis from a point of view of “naïve disorientation”. One particularly interesting one, “Underwater Carnivore” shown in a recent Swoon exhibition entitled “Monsters” (Mahkluk) shows a sad doe-eyed beauty apparently entrapped by scarlet tentacles. The frame, an actual porthole from a diving helmet, reinforces the sentiment of being hopelessly submerged with a subtle twist of satire. While ostensibly cries for help or attention, if you scratch the surface it is not difficult to sense a clever plan to shock by playing with stereotypes and challenging bourgeois assumptions – another link in a long chain of radicals and eccentrics indeed!

Any fears of Naomi being a lost or forlorn girl paralyzed by angst are dispelled by her courageous efforts, not only to promote her own creative endeavours, but also those of a close knit community of likeminded young artists.  Well organized she has set an ambitious schedule of monthly themed exhibitions for Swoon. Some like, “Monsters”, are themed group efforts. One of Naomi’s favourite artists is the young architect, Iwan Sastrawan. Sastrawan’s core works are black and white drawings that are reminiscent of Underground Comics. His subject matter – sexual hypocrisy, double standards and arbitrary codes of morality challenge the status quo directly and indirectly. The emphasis in the work displayed is on fresh and edgy.

In the grander scope of things, Naomi conceives of Swoon as a lightning rod designed to draw numerous young creative beings out of the closet, as well as a model for the creation of similar galleries set up by like minded young artists to form a cooperative network around the island and nation. She is also busy working on her website and other unique features that will allow people to share the art and exhibitions around the world. 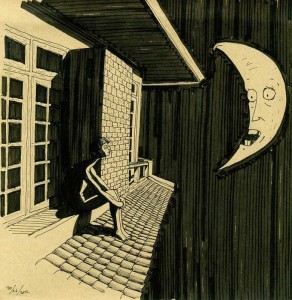 Interestingly when asked about her artistic influences, Naomi speaks of writers such as Milan Kundera, the Czech author of the Unbearable Lightness of Being rather than fellow visual artists. Naturally curious she has been working on a series of ceramic works at Jenggala. One of her favourite topics is the importance of community. This is a common theme among a new generation of young people who have grown up in Bali during the last 25 years. We speak not only of young Balinese but also a remarkable cross-section of young adults of diverse international and Indonesian origins. Some may hold foreign passports but Bali remains nonetheless their spiritual and emotional home. They have also forged enduring cross-cultural friendships that form the backbone of Naomi’s community.

The children of Bohemians, artists, eccentrics and chance visitors who married in, or simply never left represent an exciting unknown factor in Bali and Indonesia’s future. Usually fluent in the local languages and customs, they are international in every sense. The building of new bridges and formulating and implementation of innovative creative solutions that dissolve boundaries and forge alliances are tasks for which they are well equipped. If you interested in knowing more about them and this remarkable young artist, be sure to attend the next Swoon exhibition entitled “Cataclysm”, which will open at 6:30pm. For more information visit the website or send an email to put your name on this important invitation list.