At home in the old days we had a lot of board games to entertain ourselves during the evening, but with the in introduction of the PC and later the smart phones and tabloids you don’t see many people playing those old-fashion board games any more. All the board games that I played with my brothers are now available for PC and tabloids and many more games have been introduced since. 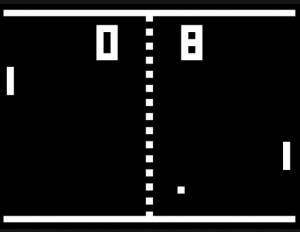 When the first PC games were introduced the graphics were very simple and so were the games. Who does not remember the first tennis game (marketed as PONG) for the PC? Two bars and a white dot moving from left to right and the other way around. This game was a big hit in the good old days. Pong was one of the first video games to reach mainstream popularity. The aim is to defeat the opponent in a simulated table tennis game by earning a higher score. Pong quickly became a success and is the first commercially successful video game, which led to the start of the video game industry.

Then came Pacman, Space Invaders and suddenly everybody was playing King Kong or Mario on small terminals that would allow you only to play one game. 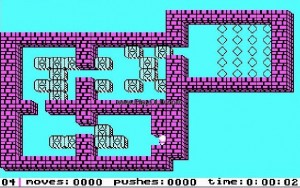 SOKOBAN
My first real experience with “computer mind games” was playing the game Sokoban, although I have seen and played other games but I got easily bored and never tried to pass any level until I played Sokoban which was, and perhaps still is, one of the most popular logic games ever.  Sokoban was introduced for the first time in 1982. Sokoban in Japanese terms means a “warehouse man”. Because of the simplicity and sophisticated elegance of the rules and the challenging complexity of the “original” problems, Sokoban quickly became an all-time classic.

The rules of Sokoban are very simple:
– Push one stone at a time to goal squares
– Push and Move actions should be minimized.

Many official versions (Boxxle, Sokoban Perfect, Sokoban Revenge) and unofficial remakes of the game appeared over the years for different computers and platforms, among which are C64, Amiga, Spectrum, PC, Macintosh, CE and Palm versions. Now you can easily find a lot of clones that are using levels and ideas of the original Sokoban game. Unfortunately only a few versions offer new ideas and unique levels. Google’s search request for “Sokoban” shows more than 60,000 web page matches.

The Logo Quiz
The first one is the Logos quiz game. This is quiz game full of fun that consists of guessing the names of hundreds of logos from different companies. To achieve this you have a lot of clues which you can use to help you complete the game. You can also ask your friends if you don’t know the answer! Challenge them to see who know more logos. 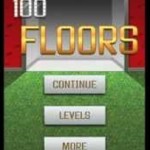 Imagine someone hands you a puzzle, but they don’t give you any instructions on how to solve it. Sounds a little frustrating, right? Well, that’s exactly what the game 100 Floors asks you to do. The game looks simple enough: you’re placed in what looks like a lobby, looking at an elevator door. The point of the game is to figure out how to get the doors to open so that you can move on to the next level. What I really like about this game is how creative it gets by using the device that you’re playing on. We played on the Android Cyrus Tab, and the game does a really fun and creative job of using the Tab’s accelerometer (the part inside the Tab that can sense which way you’re holding it). Without giving too much away, the ability to turn the Tab from side-to-side, lay it flat or shake it plays a big part in solving a lot of the levels of this game. Similar to this game is 100 doors. Move the BOX
A logic puzzle about moving boxes around. Clean the dock, do it fast! You can move, drop and swap the boxes. Three or more boxes of the same kind in a line disappear. Watch out for turns, you only have a limited number! 144 exciting levels of different difficulty. Exchange adjacent boxes and eliminate them when three or more identical boxes are in a line. To pass a level, you need to eliminate all boxes.

And on that note I would say keep on playing and keep having fun.