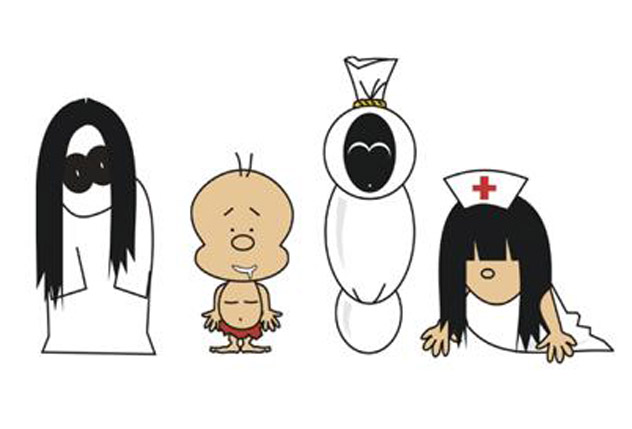 Supernatural beings – namely ghosts and spirits – are a commonly discussed topic in Asia, with myths and stories revolving around them.

Indonesia is believed to be a country full of these supernatural beings; whether it is the soul of a deceased person wandering in the human world seeking vengeance, or that of a creature doing evil, the fact that their existence has not yet, or has ever been proven, inevitably gives off a mysterious and unsettling vibe. Are you alone whilst reading this article at night? One might even be behind you right now…

First one in the list is ‘Tuyul’, sometimes also known as ‘Toyol’. It is believed to come in the form of a bald, oddly shaped child with dark greyish skin, staring at people with large, menacing, red eyes. It is believed to be a creature birthed from the soul of an aborted baby then brought back to life by a wizard’s dark, magic powers. It has been rumored that unexplainable and mysterious, petty thefts are caused by these creatures, which are believed to be kept by their owners in jars.

Another being that is equally well known is ‘Kuntilanak’. Feared in a lot of different communities, she is a supernatural being that is often seen in an all-white dress with long, thick, black hair covering her face entirely. ‘Kuntilanak’ is generally tall and has unsettlingly fair skin. It is believed that they were previously pregnant women who died unnaturally. People believe that when she is far in the distance, she gives off a howl, but when she is near, she would weep a creepy, child-like cry. A harbinger of her presence is the smell of pleasant flowers, but it will soon turn into the stench of rotten flesh.

Next one on the list is ‘Suster Ngesot’ which translates to ‘crawling nurse’ in English. It is believed that the nurse had been inappropriately assaulted and then brutally murdered. People believe that she wanders the halls of hospitals in the dark, looking distraught and disheveled. The only thing you will hear is the sound of her broken legs being dragged across the floor as she comes closer.

Last but not least, ‘Wewe Gombel’. Legends say that she was the spirit of a woman who committed suicide shortly after she murdered her husband because she was livid as she saw with her own eyes that he was being unfaithful. People believe that her distinctive characteristics are her deadly, sharp nails and her outstretching chest. It is not uncommon for parents to warn their children about the ‘Wewe Gombel’ as it is believed that she wanders around at night, kidnapping children who are still outdoors.

Perhaps the strong belief of Indonesians in the existence of these supernatural beings is the main reason Indonesian movie producers release so many movies in the ghost genre. Every week, there will definitely be at least one Indonesian ghost movie showing in the cinemas. Whether their existence is true or it is all just a hoax, no one can quite pinpoint the answer yet. Scientists do not have a definitive conclusion too. It is your choice to decide what to believe but do beware when you are walking alone at night. You may not be alone!

How You Can Use The End Screen To Make Your YouTube Videos Better?

Why Bitcoin Is Popular with Indonesians