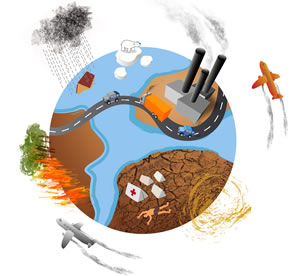 It was a long wait. Six years between Intergovernmental Panel on Climate Change (IPCC) reports on the state of our planet (i) . This time the scientists wanted to be sure they had it right (ii) . Ninety seven percent right to be sure (iii).

For what happens when you get the science wrong? You have to wait a generation for people to start to trust you again. And when it comes to climate change and the impacts on our globe of warming, that is just too long. We are living on borrowed time already.

I am a parent and teacher
When does our generation hand over responsibility for the governorship of our home to our kids? When they are 10? Too young. When 20 perhaps? But by 30, you are now in undisputed territory. And if you and I have messed it up – our stewardship of our and our kids’ home – then you’d better have a good answer for them because otherwise they will never trust us again!

“What did you do in the war, Daddy?”
This was a cry for two, nay, three recent generations. It was like a badge for our grandparents to wear with pride. And it doesn’t matter today whether they were from the so-called victorious or the loser nations. Because the loser nations of Japan and Germany; their people had more resolve than ever to show how really great they were and are as a race, a people, and a society, today.

Great War, Second World War – what was all that about?
Propaganda for both sides. Yes, part of it, was done by both sides, for sure.

That was for them then.  Over a period of four long years, and in each time period, the issue was of gargantuan importance.

Our survival? So, too, for us now.

What did you do to save the planet today, Daddy?
“Not much” I fear this current generation will be able to claim (iv) .

It’s the joy of the young to throw scorn on their parents’ views, the views of their generation. Passing the baton to the next generation means that you have not only made them aware there is a problem, but that our generation was unwilling or unable to solve it for them. Too big and irrelevant for us to care about even.

I am a scientist. It was my upbringing.
Not because of my parents. Simply because as a child I saw the mysteries of the undersea world displayed for the first time to the world by Jacques Cousteau.

The first DVD my daughter saw was Finding Nemo. What an amazing story and a different view of the world. One shark says, “Fish is food.”  Right on! That’s right! How else can a shark live?

But then the bigger rubbery looking shark says, “Fish are friends.” What do you do? It’s a turn up for the books for sure.

Today I went to see my doctor about an unusual thing. It had been monitored for a while. It had gotten big. But then when I changed the place I live, the environment it had flourished in, it also changed, become less aggressive, completely less ghastly and debilitating. Restoring what I value in my life; my kids and my health.

So, too, for our planet.

Cleanliness, safety, taking care of our planet, not being invaded by a mass of foreign bodies, substances, catastrophes I have no idea about. I find it abhorrent because I have no idea where it is it thinks it comes from.

Wildlife
In the urban jungle, do you approach a black man with a Rastafarian hat, hair, demeanour who looks trampish and say, “What’s the best way to Pelham?”

My answer is simple. Of course you do not.

Mobile phone in hand connects you to Facebook and Twitter, yet you still crave for human contact. Being part of your species really matters to you. After all, there has to be someone who can understand you on the other end of the phone, no?

So therein lies the future of our planet. You cannot live on it unless you talk to the other people on it, too.

Messed it up
Hey mate. You played your part, too!

So guys and girls, it’s simple. Live your life like a member of your clan. Never interact with anyone of a different culture or lifestyle, let alone a different world. Dead we are then. Not for now only, but forever!

Masters of our own Universe
You do not today know what tomorrow brings.

That’s the usually accepted wisdom. It’s not productive to question everything. So, the planner in you goes haywire in your head! Did something similar also happen in the past?  Like 550 million years ago?

But that was then.  And this is now. Then, there was real climate change, a naturally occurring sequence of events. Now, our climate change is largely man-made, so potentially reversible. We are using too much carbon and it is getting us into trouble when it gets into the upper atmosphere or our deep oceans. Both contribute to the green house effect of unnecessarily warming our planet.

What is there at home? More importantly, what is it that you need from your home exactly?

Rude? No. Rather, completely antisocial. If you want your world to survive, accept and embrace an alternative. What you or I have to offer is so much small beer. But offer it we must – for the sake of the Planet; your Planet, too, you know.

(i) Intergovernmental Panel on Climate Change – IPCC – reported in October. Next reports are out for a mechanism to fight climate change.
(ii) “Last time was a little embarrassing! We kicked the bucket to hell and back again”.
(iii) Poll of British public about the validity of the findings.
(iv) One of only a very few exceptions to this is Britain. It has a legal goal to reduce its carbon footprint by 80% by 2050. And it is doing more than most in this field – having reduced its carbon footprint by 25-26% in 2012 since 1990, the benchmark used.