The first time I saw pictures of Wae Rebo, I was intrigued with the traditional conical straw houses in the picturesque valley in Satarmese Barat, Manggarai. Though I always knew that this special village would embody the duality of tradition and progress in West Flores, I was about to be surprised to learn what it meant in reality.

A trek to the past

The remoteness of the location made the visit a little pricier than what I was used to as a budget backpacker, but friends assured me that it would be worth every penny. My visit in mid-December just happened to coincide with a ceremony officiating the renovation of one of the eight traditional houses in the village.

After spending a night at the coastal village Dintor, my partner and I hiked four hours up to Wae Rebo a couple hours before dawn. The 7.3-kilometre serpentine trail is suitable for beginner hikers, but nevertheless requires good stamina. The steep slopes are muddy in some parts and rocky in others, and are slippery when wet.

“The journey is supposed to be hard,” said our guide Martinus Anggo as we took a water break. “The old path used to be harder. If it weren’t hard to get there, Wae Rebo would be long gone.”

Martin, a native of Wae Rebo, owns the lodge in Dintor. He studied in The Philippines and spent years working in hotels in Labuan Bajo before returning to Satarmese Barat to help the elders of Wae Rebo revive the village’s struggling economy.

Wae Rebo natives claim to be descendants of pre-Islamic Minangkabau migrants from West Sumatra 20 generations or about 1,028 years ago. The community, currently lead by Chief Alexander Ngadu, preserves ancient Sumatran animistic traditions that have mingled with that of Manggarai, West Flores.

A culture of peace and cordiality

Upon entering Wae Rebo, Martin presented my partner and me in the ceremonial house, and each of the elders shook our hands to introduce themselves by first name. After paying our respects to their ancestors, we came outdoors to watch a ceremony for blessing the materials for the renovation of the traditional house, and another for erecting the main pole of the house upon the foundation.

The community had started gathering materials for the renovation in November. The materials were collected from neighbouring mountains. In each location where wood was cut, prayer rituals were performed to ask for permission from the local spirits of the forests.

By mid-December, the materials were readily gathered in the centre of Wae Rebo. “Gathering wood from different places is like uniting people from different countries and nations – cultures, backgrounds, and personalities,” said Martin. “When people unite in one place, we must make peace among them.”

Chickens and a pig were slaughtered as a sacrifice of peace for the spirits of the forests from which the wood for the house was taken. “That way, the spirits would return to their homes peacefully and let us use the wood for our homes,” said Martin.

The house’s main support pole is called molos, the same Manggarai word for maiden. When the molos wood is brought into the village, the same ceremony for welcoming the new wife of a Wae Rebo man from another village is performed. From the place where she originated until she reaches the village, the molos must not touch the ground. When rivers are crossed along the molos’ journey, a ceremony is performed to make peace with the spirits of the waters. 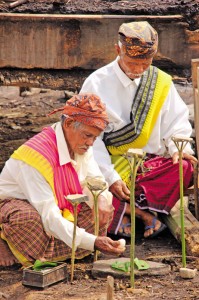 The duality of tradition and progress

Martin’s generation is only the third to have converted to Catholicism. Before, the community’s resistance to Christianity was due to seeing other Florenese cultures die out upon conversion. After centuries of European missions, the community finally accepted Catholicism after receiving instructions from ancestral spirits to practice it alongside ancestral worship.

In the early 20th century, the Dutch East Indies government tried to ban natives from living their “primitive ways” in Wae Rebo. The back-breaking access made it difficult for the government to control the area. “But the people of Wae Rebo are loyal to the ancestors, more than they are to the government,” said Martin.

At a glance, Wae Rebo seems to remain immune from the homogenising forces of modern Indonesia and globalisation. Village men proudly wear their bright-coloured Manggarai-style ikat textiles and batik headdresses as they tend to their plantations and livestock, or collect materials in the forests. Women teach their children local wisdom in the Manggarai language, cooking over firewood and weaving clothes for the family.

With one straw house able to house up to eight families plus a season’s supply of food, the village’s culture remains very communal. Other than limited electricity in the evening, there are few signs of modernity in Wae Rebo. Currently there are no schools, hospitals, cellular phone network, television and radio in Wae Rebo, though a children’s library is under construction.

Nevertheless, the people of Wae Rebo are relatively well educated and informed of the outside world because of its twin village Kombo in the lowlands. “Nearly all residents of Wae Rebo have a house in Kombo, and vice versa. The census counts the residents of the two villages as one,” said Martin.

In Kombo there is a boarding primary school for Wae Rebo children, and in Dintor secondary school. Parents visit studying children on Saturdays and attend mass there on Sundays. After selling coffee and cloves in the lowlands market on Monday and shopping for their necessities, they return to Wae Rebo for the week.

“It’s like living in two worlds; a semi-modern world in Kombo, and the primitive world in Wae Rebo. In the lowlands I wear shorts, but every time I come home I wear the traditional attire. It happens automatically,” Martin explained.

Due to this double life in Kombo, Wae Rebo children today are exposed to television, pop music and culture, Bahasa Indonesia and some English. This relative ease of accessing mass media in the lowlands, combined with the growing tourism-based economy, have also inspired some young Wae Rebo natives to travel to faraway places and pursue a higher education or work experience.

Nevertheless, for a native of Wae Rebo, home is where the heart is. “Karma awaits the Wae Rebo native who does not return home, usually in the form of an illness or misfortune,” said Martin.

A time of the year where travelling Wae Rebo natives are expected to be home is during the Wae Rebo New Year. Penti is celebrated yearly on November 16 to mark the beginning of the rainy season and pay respects to the spirits of the local wellsprings.

We left with a formal farewell in the ceremonial house. As we passed Kombo on the way back to Dintor, school kids at a modern rendition of the Wae Rebo house left their games in the yard and came to our minibus to say hello. A man from the ceremony in Wae Rebo was with them, now dressed in shorts. In my heart, I hope the children will faithfully follow their elders’ footsteps in living the duality of tradition and progress that make Wae Rebo the special community that it is.