Bali, Lombok, Mount Bromo, and Yogyakarta are all Indonesian destinations worthy of a visit.

But just an hour away from Jakarta lies the yet natural and unspoiled Indonesian island of Belitung; one to be reckoned with besides the usual suspects for its equally picturesque scenery and nature spots.

This island has been awarded a UNESCO Geoparks designation, with 24 unique geo sites. If you are like me, why should I care? A Geopark is a region with superior geological, natural, and cultural heritage. Geoparks work to protect these heritages and to share them with people from all over the world. This is a big deal! In fact, big enough to attract delegates from 20 countries for G20 2022.

From rainbow-coloured rocks to venturing into a bat cave, here are the top nine things to do as you discover Belitung.

No, your eyes are not fooling you. This winter-like wonderland exists right in Indonesia. Once a mining site, the Blue Kaolin Lake paints a reflection of the sky with its cyan blue waters and white sandy dunes. Think Scandinavian landscapes, but with summer temperature.

As its name suggests, the water is exposed to kaolinite – a soft clay. Although locals sometimes shower with the water here, it is not drinkable. Refrain from swimming in the lake too as its depth is unknown and the land is considered fragile.

Batu Baginde, one of 24 Geosites

It’s a bit of a climb but worth every step. The view atop Batu Baginde – roughly translated as His Majesty, the Rock – is breathtaking. It may look like a mountain, but it actually constitutes two giant granite rocks affectionately identified as male and female. According to the locals, this location often becomes a sacred place to look for a blessing.

Expect a trek through a dense forest on a well-worn path, before you reach the starting point of the climb. About an hour should have you positioned on the crown of His Majesty, the best seat on the island. There will be pre-installed ropes and vertical stairs to ease your journey along the way.

The climb might prove difficult for some, but you’ll be rewarded with a beautiful overarching view of the island which makes it all worth it.

Getting there: Batu Baginde is best accessed by car. It’s a two- to three-hour drive from Tanjung Pandan. Head to Membalong district first, then Tanjung Kandi Village. Your trek will start there.

A jade-coloured lake seated within the pit of majestic red cliffs, Kelapa Kampit is a tranquil former tin mine. Its terrain is reminiscent of the rice paddy fields in Sapa, Vietnam.

Take a moment here to simply soak in the peace and quiet of this idyllic place, far away from the city crowds and traffic. There are some mining caves to explore, although it is best to stay at the mouth of it for your own safety.

Getting there: The fastest route to Kelapa Kampit is less than an hour’s drive from Bandara via Manggar Street. Upon reaching Kelapa Kampit District, head over to Senyubuk Village to visit the open pit.

Flanked by balmy palm trees and an iconic ancient lighthouse built by the Dutch in 1882, it is impossible to miss Pulau Lengkuas.

Being an island on its own without any interference of city lights, you may even want to stay here past sundown for a night to stargaze. During your trip, your boat driver may bring you to four commonly frequented snorkelling sites. Dive underwater to swim alongside schools of fish while enjoying the unique colourful corals.

Hop onto the next island, Pulau Batu Berlayar known for its granite rocks which look like sailing ships docked at the little island from an aerial view. Pack a drone along for an overhead shot!

We all know SpongeBob lives in a pineapple under the sea. But who knew Patrick and his friends live at Pulau Batu Berlayar – there are plenty of starfishes to be found on this island.

Yes, you might be a tad starstruck and want some photos. But do be mindful that starfishes can suffocate and die if they’re out of the water for more than five minutes and the natural oils on a human hand can cause them harm, so look but don’t touch.

Getting there: The boats will leave from Tanjung Kelayang . Plan on a five- or six-hour tour, and wear your swimming gear. The cost for two is about Rp600,000 or about Rp1 million for a group day trip.

If you’re a sunset-chaser, Tanjung Pendam Beach is an ideal place to catch one. You’ll want to be there early during the evenings to await the skies’ transition from blue to a pinkish-orange hue as the sun sets. Along your stroll on the beach, drop by huts that double as mini-galleries to enjoy locally-made paintings and handicrafts. You can even purchase them as a souvenir.

Getting there: Take a car ride westward from Tanjung Pandan City; the distance is approximately 4KM.

After your day of adventure, you will want to head over to another site that is totally unique on the island, The Well Restaurant/Café. While it may not fit into the category of “natural” it is one-of-a-kind and a welcome site after a day in the sun. It is modern, air-conditioned, serving Sumatran roasted single-source arabica coffee and has a wood-fired grill serving up juicy Tenderloin Steak from New Zealand grass-fed beef.

Owned and operated by a Canadian lady who has made Belitung home, it is purposed to provide international-standard training and opportunity to the people of Belitung. Oh, and don’t forget to try the made-from-scratch artisan bread and cakes.

Getting there:  The Well Restaurant/Cafe is conveniently located on the main road between Tanjung Pandan and major hotels.

If you’re looking for more than just a no-frills beach, Tanjung Tinggi should be on your radar. It is decked with many white granite rocks near the shore; perfect for you to sit atop and have your very own Little Mermaid moment. Watch your steps as you climb though, for these granites can be quite slippery. 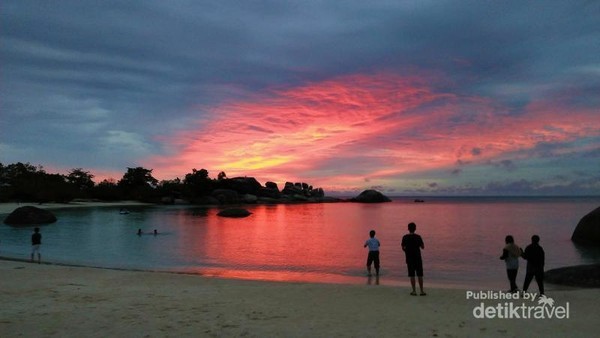 The beach features beautiful shorelines that stretch approximately 4KM in length. Plus, the waves are not too strong either, which makes it a good swim spot.

Getting there: It takes approximately 30 minutes to get to Tanjung Tinggi from Hanandjoeddin Airport by car.

Here’s one for the adventurers among us. It does require a good level of physical fitness for the climb up the hill, but ropes and stairs are provided to assist you. You don’t want to miss the opportunity to test your bravado by stepping inside a natural bat cave. Ask your guide about the historical significance of this strategic location in protecting the locals from pirates of days gone by.

Nek Santen Cave is located on Mount Kubing in the Membalong district. It is rather secluded and less touristy, so expect a smaller crowd when you’re there – no need to jostle with tour groups or camera-toting visitors.  It gets pitch dark the further you’re inside, so it’s best to stay near the mouth of the cave and only venture in further if you feel confident and comfortable. This cave is home to thousands of bats that might intimidate initially, but they’re generally shy creatures and will not attack unless they feel threatened. While you’re having your very own National Geographic moment, remember to not use flash photography or you’ll risk startling them!

Tip: Besides a trusty flashlight and solid footwear, make sure to pack some snacks and extra water with you during your bat excursion. A pair of gloves will also come in handy to protect you from the cave walls.

Getting there: Head over to Membalong district from Tanjung Pandan through Membalong Raya Street by car. It’ll take you approximately one hour and 30 minutes. From there, head over to Lassar Village and trek towards the cave.

The coral reefs are amazing!  There are so many locations, and locals know how to find them. You won’t want to forget your underwater camera.  The best time of year is between April and October.

Remember, keep your hands together so you aren’t tempted to touch and please, do not stand on the coral.  They may look like rocks but are actually living creatures and to do so may damage or even kill them.

With return flights to Belitung at only US$75 and hotels being about the same, this is a very affordable and exciting vacation for a four- or five-day getaway at this amazing geo-tourism gem.