“Perhaps life is just that… a dream and a fear.” – Conrad

And so another sojourn in the far-flung archipelago of Indonesia; this time to the Derawan islands off the northeast coast of Kalimantan – the name for Indonesia’s part of Borneo, the third largest island in the world and the largest in Asia.

I’d never been to Borneo before, and so it was with much excitement that we arose at the ungodly hour of 3am – a calculated move, mind you, to avoid Jakarta’s soul-crushing traffic jams on the way to the airport, a huge problem at many other times of the day, which often results in people missing their flights.

Our first flight brought us as far as Balikpapan, and from there we took a connecting flight to Berau, or more accurately Tanjung Redeb, the town that Conrad based his imaginary village Sambir in his books Almayer’s Folly and an Outcast of the Islands.

Yet despite its associations with classic literature, Tanjung Redeb is not as beguiling as it sounds; in fact, it’s as nondescript as a plain cardboard box, a more unattractive place in Indonesia you will struggle to find, succinctly summed up by Conrad’s fictional character Almayer as “that god forsaken hole”.

Back in Conrad’s day, Tanjung Redeb – which is situated on the banks of the huge Mahakam River – was a trading post for goods from the interior; bird nests, gutta percha, rattan, that sort of thing. Occasionally, indigenous tribesman from the interior would make their way up the river – these are the Dayak, famed headhunters and cannibals (at least they were), notable for their elongated earlobes and tribal tattoos.

But times change and what you get floating up the river in 2013 is felled timber and humungous-sized barges of coal, much of which is sourced from the vast Berau Coal open mine coal pits (in 2012, production reached around 21 million tons), partly owned (indirectly) by Aburizal Bakrie, the Golkar Party chairman and aspiring 2014 presidential candidate.

To get to the small port on the coast from Tanjung Redeb takes about two hours by car. You can look out the window and witness for yourself the ongoing destruction and mutilation of Kalimantan’s once pristine jungles or you can keep your eyes closed. I’d recommend the latter – it’s less painful.

From the small port called Tanjung Batu, it’s a 40 minute ride in a speed boat to Derawan – easily the most fun part of the journey. 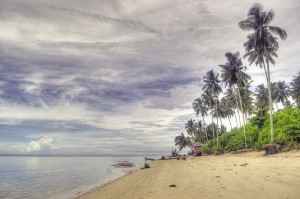 Derawan is a small island that you can walk around in 30 minutes or so and is famed for its turtles, which are easy to see whether diving or snorkelling, or even from one of the island’s jetties which stretch out into the open sea. Derawan is also the most practical place to base yourself while in the area; the accommodations are cheap (no overpriced luxury dive resorts here), there are plenty of simple restaurants to eat at, and you can also organize diving and boat trips to the other islands – of which there are 31 in total. There is a population of around 800 hardy souls living on Derawan, many of whom are the famed bajau (sea gypsies) who can trace their ancestry to the Philippines where they once lived a nomadic lifestyle.

So is it paradise? Well yes, and no. From a positive aspect, the turtles are truly magnificent and the island’s relative remoteness means that Derawan still retains that “Robinson Crusoe” idyllic island charm. But this may not last.

Unfortunately, the locals don’t care much for turtles and will steal their eggs if they can (the WWF had to initiate a conservation program to prevent turtle eggs from being stolen after they have been laid). On top of that, the locals also consider their beautiful island to be some sort of a huge rubbish tip and dispose of garbage anywhere and everywhere; on land or into the sea – it doesn’t really matter as they don’t seem to care. As for your long sought-after tranquillity? Well, you should definitely get it on the weekdays. But come on the weekend and be prepared to have your peace shattered by groups of noisy, local tourists who descend upon the island in droves.

To reach the other islands near Derawan you have to charter speedboats. Obviously the more people there are, the cheaper it works out.

This incredible island feels like something out of Jurassic Park and has a pristine coral reef to snorkel or dive, but is best known for its salt water lake which is populated by a huge number of non-stinging jellyfish – making it a truly amazing and unique place to snorkel.

Sangalaki is best known for its mantas, although in a rather ominous development, they are becoming much more difficult to spot, possibly frightened away by fishermen or for other reasons.

Home to at least three luxury dive resorts, Maratua is the most populated island with c. 3,000 inhabitants. Despite the crystal clear waters, however, I was astonished by the large amount of floating trash – especially plastic bags and empty bottles, directly in front of one of the dive resorts. I was assured by one of the resorts staff that this was “natural” rubbish and had nothing to do with the people living on the island. Hmm… 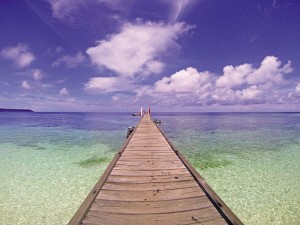