Nusa Tenggara Barat (NTB) is one of Indonesia’s 34 provinces. Wedged between Bali and the tiny island of Komodo, it is trying to carve itself a spot on the tourist map of Indonesia. Bali, to its west, is, of course, the leading and best-known tourist destination, so much so that abroad the island is quite often believed to be a separate country. Komodo Island – which is part of Nusa Tenggara Timur Province – to its east, is a strong draw for those interested in seeing the world’s largest ‘dragon’.

In spite of official government efforts to promote NTB as a tourist destination, the province remains overshadowed by its westerly neighbour even though the beaches are marvellous white-sand dreams and the forested interior offers a range of attractions for eco-tourists and those who like roughing it.

The main tourist centres are Senggigi, with starred-hotels and resorts on the west coast, and the Three Gilis, three small islands, to the north of there, frequented largely by backpackers.

The second island of the province, Sumbawa, has probably even more to offer in terms of secluded white-sand beaches, nature and natural scenery. The main drawback, however, is the quite trying process of getting there. The main town on the island is Bima which in most tourist guides typically gets a less than favourable press. Most visitors, the guides say, will depart at the first opportunity for the surf beach at Dompu, or on to Labuan Bajo and the Komodo National Park. The scarcity of tourist facilities is another reason that the island is not visited much by non-surfing tourists, which is rather unfortunate as parts of the island are very beautiful.

The most striking feature of the island is Mount Tambora. Slightly over 200 years ago, on 10 April 1815, this volcano erupted in what was the largest volcanic explosion in recorded history. The blast altered the global climate for years afterwards and directly caused the death of over 70,000 people. Hundreds of thousands more perished in the aftermath due to disease and famine.

The debris produced by the eruption measured some 175 cubic kilometres, or enough to cover Jakarta in 280 metres of ash and volcanic rock particles. The ash plume rose to 33 kilometres, reaching well into the stratosphere, and winds quickly moved the ash around the globe, causing vibrant sunsets.

The explosions were heard as far away as Sumatra. The memoir of Sir Stamford Raffles, who was then on Java, contains this excerpt:

The first explosions were heard on this Island in the evening of 5 April, they were noticed in every quarter, and continued at intervals until the following day. The noise was, in the first instance, almost universally attributed to distant cannon; so much so, that a detachment of troops were marched from Djocjocarta, in the belief that a neighbouring post was being attacked, and along the coast boats were in two instances dispatched in quest of a supposed ship in distress.

The ash plume also caused global cooling which led to crop failures and widespread famine. In Europe, for instance, 1816 became known as the “year without summer”.

Mount Rinjani on Lombok, at 3,726 metres – the second highest volcano in Indonesia – is the equivalent of Tambora. A massive eruption in the middle of the 13th century is believed to have triggered global cooling, failed harvests and famine, too. Its caldera contains a crater lake at 2,000 metres above sea level. The mountain and lake are considered sacred by both the Sasak, the original inhabitants of Lombok, and the Balinese Hindus on Lombok.

The presence of a fairly large group of Balinese Hindus started in the early 17th century and by 1750 the Balinese had taken control of the whole island. Internal rivalry resulted, however, in the island being split into four Balinese kingdoms, and in 1838 the Mataram kingdom finally took overall control. Relations between the Balinese and the local Sasak were, however, rather strained, especially in the eastern part of the island. And during one of the many peasant rebellions, the Sasak asked the Dutch on Bali for help. The Dutch Governor General reacted to this request in 1894 by sending an army to Lombok and after heavy fighting, and the near destruction of Mataram, the Dutch took control of the whole island in 1895. 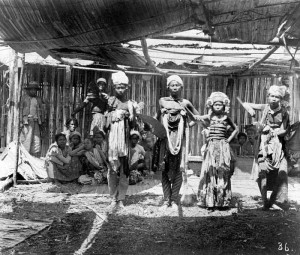 According to the Encyclopaedie van Nederlandsch-Indië of 1917, the Dutch are remembered as the “liberators” of Lombok, but that, of course, is a fairly biased statement.

The Sasak are the largest ethnic group on Lombok and the majority adheres to Islam, but two version of Islam are professed—Waktu Lima and Wetu Telu. The former, Waktu Lima (five times), refers to the five daily prayers Muslims are required to perform. Wetu Telu (three symbols) in the Sasak language is also based on the Muslim religion, and according to its adherents they were the first to be converted to Islam by the Wali Songo (nine holy preachers) who came from Java in the 17th century. They set foot on the island in the village of Bayan and built the first mosque there.

Wetu Telu is essentially a simplified version of Islam combined with ancestor worship and a strong belief in spirits. Interpretation of what the three symbols represent varies widely. To some it is ancestors, god and human life; to others it might mean birth, life and death; sun, moon and stars; or sky, earth and water. Wetu Telu Muslims pray three times a day, and the Ramadhan fasting month is reduced to nine days of fasting only. They moreover enthusiastically hunt and consume wild pigs, washed down with the strong rice wine they brew.

Nowadays very few Sasak will openly confess that they are Wetu Telu Muslims, as religious intolerance has been increasing. During the past decade, there have been regular outbreaks of violence towards Ahmadi Muslims, followers of the Ahmadiyya sect. Under the banner of: Destroy the Ahmadis who bring shame to Islam…, they were evicted from their villages and saw their houses being destroyed. They ended up in poorly equipped temporary shelters where they found it nearly impossible to survive on the support provided by the Government’s social service system. The only way to get out of the shelters appears to be to convert to the conventional version of Islam. No wonder the Wetu Telu Muslims nowadays will proclaim that they are “modern” Waktu Lima Muslims.

But deep in the forests on Mount Rinjani some shrines have remained. Ceremonies are held there on certain nights to ensure that the spirits are appeased and no harm will come to the villages. And the villagers could tell you of trekkers turned to stone because they did not honour the spirits and were discourteous to nature. But that is another story to which trekkers should maybe pay attention.

Love In The East