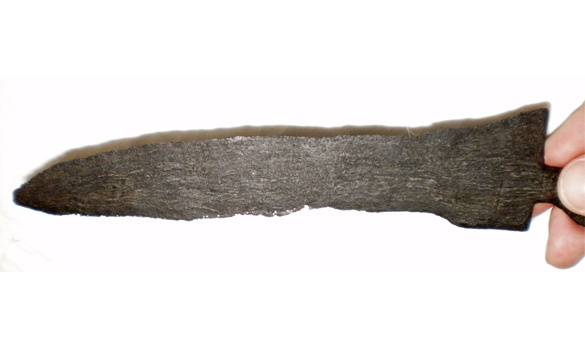 It is widely believed in Indonesia that daggers, polished stones and fabrics can be imbued with magical powers that will provide protection and good luck. The truth is, there’s as much magic in any talisman as there is in a Hello Kitty toothbrush.

A pair of motorbike thieves from Bogor, south of Jakarta, decided they needed some potent charms to ensure they would never be caught. An obliging practitioner of black magic sold them what he claimed was rope from the burial shroud of a virgin girl who had died on a Friday. Such rope is supposed to possess extremely powerful magic.

The thieves, Mahfudin (25) and Aca Ajen (39), would tie a piece of the white cotton rope to any motorcycle they wished to steal. They believed this absurd action would send the owner of the motorbike into a deep sleep – or render them powerless, so the vehicle could be stolen without risk. They also tied pieces of the rope around their waists, confident that such hocus-pocus would protect them. Aca carried a keris (asymmetrical dagger), which he believed gave him further immunity.

Police caught the pair attempting to steal a motorbike from a young woman in Jakarta on the night of March 27. The men seemed to lose faith in their talismans when police fired warning shots. Two days earlier, city police had shot dead three motorcycle thieves.

Under interrogation, Mahfudin and Aca confessed to stealing dozens of motorbikes, mostly from office car parks and housing units. They had used so-called “letter T keys” to start locked ignitions. The bikes were sold in the West Java capital of Bandung for between Rp.2 million to Rp.5 million each.

The men now face five years in jail. The scammer who sold them the rope was not arrested. Police said the cord was not from a shroud; however there have been cases of grave robberies where thieves have stolen shrouds, and even young corpses, for their supposed magical properties.

Scammers sometimes profit from superstition by collecting advance payments for talismans and then failing to deliver the goods.

In the East Java regency of Bondowoso, police on May 22 arrested a 30-year-old man named Karim, who had offered to sell “magical” antique samurai swords worth Rp.2 trillion ($172,000) but absconded after receiving deposits.

A Navy member from Cirebon, West Java, was interested in buying one of Karim’s swords and in March sent his associate, Jarianto, to check the weapon. Jarianto later paid a Rp.77 million deposit and agreed to go with Karim to the East Java capital of Surabaya to collect the sword. On the way, they stopped at Situbondo bus terminal, where Karim feigned illness, saying he needed to go to a toilet to vomit. He left with the money and never returned.

When police arrested Karim, he was wearing a cloth pouch containing some good luck charms: bits of paper with Arabic inscriptions, an agate stone and a piece of red fabric. “These were talismans for protection. Maybe because I did wrong, that’s why I have not escaped now,” he said.

Media images showed Karim’s face had been beaten – something not uncommon during police interrogations. The suspect said he was merely a pawn working for two bosses, who paid him Rp.300,000 for every sword buyer he found.

Bladesmiths have worked for generations in the village of Pucang Anom in Bondowoso. According to a report by Indonesia’s state news agency Antara, one maker of samurai swords in the village used to receive regular orders from the Japanese Embassy in Jakarta.

Samurai swords make interesting decorations and gifts, but buyers should beware that many of those offered at markets or on eBay as antiques are mass-produced fakes, while those advertised as possessing supernatural powers contain zero magic.

Good luck trinkets come in all forms. In Lampung province, southern Sumatra, a man convicted of raping children was later accused of running an embezzlement operation from his jail cell. Inside his wallet, police found four pieces of tiger skin covered in elephant semen, which he claimed were his family’s heirloom talismans.

Confidence – even the confidence to commit crimes – comes from within, not from “magical” knives or shrouds, and certainly not from tiger skin coated in elephant ejaculate. Local media reports on these matters usually fail to inform readers that magic is nothing but trickery or wilful delusion.