cIn contrast, popular publishers love it, as its inclusion in a book title is a powerful selling point. Recently there has been an outpouring of books claiming that the lost Atlantis was here, in Indonesia.

Atlantis was first mentioned in two works by Plato, Timaeus and Critias. Many academicians believe that Plato’s Atlantis is merely an allegorical myth warning against the hubris of nations. However, taken literally, Plato’s account tells of a vast continent and island-based civilisation called Atlantis that was destroyed by a cataclysm around 9500 BC. He gives fairly general geographic and zoological information, and quite specific topographical descriptions of the large harbour city that was Atlantis’ capital.

From a mythological point of view, George Ivanovich Gurdjieff, a spiritual leader of the mid-20th century, in his allegorical work All and Everything, indicates that there were scattered survivors of Atlantis, some of whom foregathered in what is now Egypt, forming an esoteric society which built the Sphinx and laid out the groundwork of the Giza pyramid complex for completion over millennia. This accords with current empirical research being carried out by Robert Bauval, Graham Hancock and John Anthony West on the Giza site.

Thousands of books have been published on the location of Atlantis, and it seems easier to find a country that is not put forward as a contender than the opposite. Recent claims have pinpointed Antarctica, Crete, southern Spain, West Africa, and even Liverpool. Yes, and Indonesia… 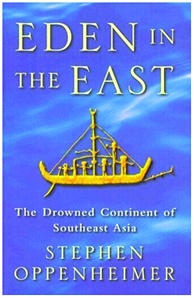 The ‘Indonesian’ theories are focused on ‘Sundaland’, (not to be confused with West Java, or the football team which recently escaped relegation from the Premier League). During the last Ice Age, Southeast Asia was a single huge continent, to which the name Sundaland has been given. Flooding gave shape to the present coastlines of Sumatra, Java, and Kalimantan, now separated by the shallow Java Sea.

The first book in the current ‘Atlantis in Indonesia’ series was Eden in the East (1999), by Stephen Oppenheimer, an Oxford professor with a distinguished career as a clinical paediatrician in Malaysia and Papua New Guinea. To his credit, he avoids using the ‘A’ word. Referring to the drowned Sundaland and the effects of its catastrophes and consequent migrations, he covers geology, archaeology, genetics, linguistics, with a long section on mythology, attempting to show that much of the mythology of the Middle East and Europe was fertilised from the area which he describes as a lost Eden.

2005 saw the appearance of Atlantis: The Lost Continent Finally Found, by the late Professor Arysio Nunes dos Santos, a Brazilian nuclear physicist who, like his football-hero countryman Neymar, brought some feistiness to our Atlantis arena. Dos Santos conceived Atlantis as a vast continent covering the present Africa, the Indian Ocean, and Southeast Asia. He produced a checklist of 32 criteria matching Plato’s description of Atlantis with features and conditions prevailing in Indonesia and by extension the drowned Sundaland, and concluded that here was the most likely candidate for the location of the lost Atlantis.

The ‘Atlantis in Indonesia’ movement was given a big boost by the quietly sensational discovery circa 2012 that Gunung Padang in West Java apparently conceals a step pyramid that dates back to and possibly beyond the last Ice Age.

Danny Hilman Natawidjaja, the no-nonsense geologist and Caltech alumnus who is leading the research team at Gunung Padang with the strong support of both previous and present presidents of Indonesia, came onto the field (as a striker, surely) with a book published last year, containing impeccable data on such subjects as geo-tectonics and tsunami generation. But, even Pak Danny couldn’t resist entitling it Plato Tidak Bohong: Atlantis Ada di Indonesia (Plato is not lying, Atlantis is in Indonesia). At this stage you might feel you want to check out the Monty Python football game between the Greek and German Philosophers – Plato is in goal for Greece.

The latest player to take the field is Dhani Irawan, a hydrologist, surely a midfielder, whose book, Atlantis: the Lost City is in Java Sea, was published in April 2015. His theories do, to some extent, build on those of De Santos, but he also produces some interesting original findings. Based on his own expertise, he commendably draws attention to the remarkable east-west transverse channel system (anjiran) which links the north-south flowing rivers in Central Kalimantan. As I understand it, Dhani locates the capital city of Atlantis on Bawean Island, which sticks up from the drowned lands between Kalimantan and Java. 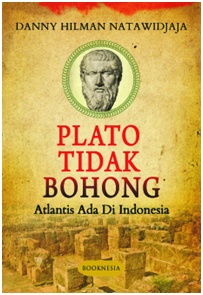 Irawan also makes use of Dos Santos’ 32-bullet checklist of correspondences between Plato’s Atlantis and Sundaland/Indonesia, and here I think they are on shaky ground. The first criterion mentioned is that Atlantis was in the Atlantic. Dos Santos and Irawan get around this by stating that the ‘Atlantic’ was the name of the world ocean which for the Greeks surrounded the three known continents, so the Atlantic was also the Pacific. Then there are the Pillars of Hercules, beyond which Atlantis lay. For Dos Santos, these are Gunung Agung on Bali and Gunung Rinjani on Lombok, and for Irawan these are the symmetrical ‘tugu’ gates which we all know from Java and Bali. But Plato knew his Mediterranean. For him the Pillars of Hercules could surely not be other than Gibraltar and Ceuta where the Med enters the Atlantic.

Some of the local ‘Atlanteans’ can’t resist including, on their sites, blogs, videos or slides from B-movies on Atlantis. These are parodied by Colin Wilson as “the usual scenario with Greek temples, white-bearded priests, and beautiful blondes wearing togas like linen bathrobes.” Some of my former students may find it hard to believe, but I’m not old enough to have played football against Plato, although I do sometimes trawl the tombstones at the bottom of the YouTube ocean, to listen to Atlantis by the Shadows and by Donovan from the very cool, Ice Age 1960s.

So, what I am suggesting to former and future researchers is, please kick the ‘Atlantis’ football into touch, and concentrate on the authentic wonders of Gunung Padang; other potential step pyramids; the celestial alignments of the Borobodur-Prambanan complex; the irrigation marvels of Central Kalimantan; etc., etc. Do we really want hawkers waylaying us on the steps up to Gunung Padang with chunks of ‘Atlantis Rock’, ‘disappearing’ the remarkable basalt columns there? After all, Britain does all right from Stonehenge without having to cook up an Atlantis connection.

Admittedly, however ancient civilisations and heritage tourism is a growth industry, with so many positive benefits for Indonesia if properly managed – as President SBY and President Jokowi surely realised when they had the vision to support the activities of the research team led by Danny Natawidjaja at Gunung Padang based on solid empirical scientific evidence. Indonesia may be down there in world soccer rankings, but it’s surely in the top five for its wealth of cultural heritage. So let’s all try and share the wonders of this amazing country and preserve and promote its remarkable authentic marvels in a way that avoids too much sensational focus on the scantily toga-clad sirens of Hollywood Atlantis.