Along with blowpipes, traditional tattooing, mastery of plaiting crafts, canoe-building and the custom of wearing huge bunches of metal earrings to elongate earlobes, the longhouse is now beginning to disappear.

I hoped the boatman knew where he was going. Using mangrove trees, mud banks, stumps, and other natural features as markers, he navigated with the same confidence that I would walk to the corner minimarket on Bali. This was comforting because I could never find my way out of here.

I had only a week – from start to finish – to see a longhouse. Most of the native Dayak people of Kalimantan, almost half the territory’s population, still live deep inland along the banks of rivers and tributaries.

I took a longbot (longboat) from Samarinda up the Mahakam River in East Kalimantan with more than just the usual baggage. I was also burdened with an excess number of preconceptions.

Mind you, there was no lack of preparation, which was turning out to have been the fun part. I had begun my course of anti-malarial pills a week before. As there are no banks or moneychangers in the interior, I had collected bundles of rupiah in small denominations. A traveller had told me that the head of a longhouse appreciates gifts like sunglasses, western t-shirts, coffee, cigarettes, sugar, salt, and flashlight batteries. Pencils, pens and notepads go over big with the kids. 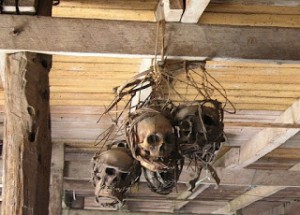 All these, and more, I carried. Later I was to learn that the Dayak’s kindness and hospitality are overwhelming, and I had no use for these items. Even minor government officials in remote areas were unexpectedly helpful. Pak Udin, downriver at Muara Muntai, even introduced me to a family who put me up, fed and entertained me.

The longboat is specially designed for river travel, decorated with painted bloodshot eyes to guide us safely through treacherous waters. During heavy rains, the river could double in size within hours. We tried negotiating several branches of the river in order to reach untouched longhouses, but turned back because of strong currents.

The skies were darkening; the boatman speeded up. Beyond Tanjung Isui, my heart quickened as we rounded a bend and I saw my first working longhouse in Mancong village. We pulled ashore; our boat squeezing in amongst others nestled like pick-up sticks along the embankment. I scurried up the steep, muddy path and the villagers led me to an old longhouse beside a courtyard of carved wooden posts and statues. Although this was known as a ‘tourist longhouse’, it sure looked like the real thing to me.

As a courtesy, I removed my shoes, climbed up the ladder and entered. Looking around me, it was obvious that the spirit of cooperation among relatives and between longhouse members was very close. While their parents were away in the fields and gardens, old women looked after the children and did the domestic chores. Old men sat around gossiping, smoking, repairing fishing and farming implements. Children played on the building’s long veranda and down in the shallows of the river.

The most salient feature of Dayak society, longhouses (lamin) are ridge-roofed structures that can reach up to 150 metres long and 9-18 metres wide. Several longhouses, each with 50 or more families and as many as 200 doors, may make up a Dayak village. Villagers, working cooperatively, can erect a new one in less than a week. Due to rapid tropical decomposition, lamin usually don’t last more than 15 years.

Most longhouses are raised one to three metres off the ground on wooden piles, which are easier to replace than rotting floorboards. Kitchen scraps are pushed through the floorboards to feed pigs and chickens foraging underneath. The current of air below the structure reduces vermin and prevents dry rot. Stilt construction also provides protection against snakes, floods and – in former times – enemies. 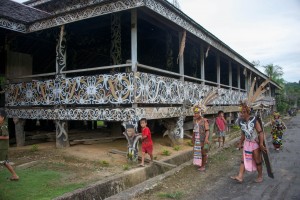 Longhouses evolved in a time of constant intertribal warfare. Dayak longhouse architecture and craftsmanship can be magnificent, with many parts of the structure – doorframes, galleries, posts – decoratively carved. Teakwood railings are fashioned into dragons, snakes, demons, or birds, with fine detail including scales and feathers. There are even carved lessons in sex education.

A covered veranda, the communal living area, runs the full length of the building, usually facing the river. This space is used for loafing, child care, visiting, repairing implements, and hanging fish traps, boat paddles, weapons, and other articles of daily use. Clothes are hung out to dry here.

One narrow longhouse door faces east, in honour of the sunrise and its association with life. Interior partitions separate family groups; distant relatives may live at the other end of the building. Floor slats bounced and slapped as people moved around and worked. A loft upstairs is used
for storing rice, baskets, stacks of woven mats, fishing nets and firewood.

It was raining now. I staked a place on a mat in one corner of the veranda. The newcomers were brought over-sweet hot tea and biscuits. I could see high up in the rafters a few blackened old baskets. I imagined they contained skulls – still revered totemic objects, thought this wasn’t likely. Old skulls had been turned into the authorities long ago.

At nightfall, dinner was served, the usual Indonesian fare of omelettes, nasi goreng, curry soup and banana fritters. Dutifully, silently, a long line of children, no older than six or seven, carried the pots, bowls and plates to a large woven mat. They cleared the after-dinner dishes away just as efficiently and just as wordlessly.

Near midnight, the talk subsided to barely audible whispers. I could hear rough, flexible ladders being pulled up, keeping the building free of animals, insects and other intruders. The air was heavy with a fecund door of a tropical rainforest and of acrid mosquito coils smoking invisibly. Completely enveloped in darkness, the screaming and clatter of cicadas and other insects was deafening. Within the huge structure, the only interior sound was that of the soft breathing of slumbering bodies around me.

I felt safe, as if sealed away in a cocoon.

What will be lost when the longhouses go? A whole way of life. In the two nights I spent in the creaky old longhouse, I knew that nothing could replace the sense of community one feels inside of one. The whole building seemed to expand and contract, as if at one with the forest, indivisibly part of nature. This is a quality that a row of modern cement blockhouses with corrugated iron roofs cannot ever replicate.

The Big Apple and the Spice Islands

Love In The East