Work has already begun on a mysterious five metre tall creature hidden behind a huge tarp with Styrofoam shavings lying hither-thither. The only clue to its identity are the menacing pointed claws protruding from underneath.

The men of our banjar are creating one of Bali’s newest and most unique art forms, a giant doll-like papier mâché Ogoh Ogoh statue, which will depict a demon or some other fearsome character, which has become an integral part of the upcoming observance of Nyepi on March 12th.

Hoisted onto the shoulders of village men and boys, the elaborately made puppets are enthusiastically crafted all over Bali. During the weeks leading up to this traditional annual celebration, disembodied heads, hands and arms are scattered about workshop floors in almost all the island’s village community halls (banjar) as artisans bend, shape, paint and carve foam and decorate headless torsos before the final donning of the hideous masks on top.

The making of the giant puppets actually only began in the early 1980s when then-governor of Bali I Mantra first conceived of the idea of staging a yearly parade in the kampung around the capital during pre-Nyepi celebrations. Nyepi has since become so popular that tourists plan their holidays around the island-wide event and pickpockets lurk among the rowdy throngs to prey upon the unsuspecting. Restrictions on the parades are imposed by local politics. Raucous ogoh-ogoh processions are forbidden during an election year when brawls can break out between different political factions.

Many of the splendid puppets have a highly energetic quality hovering above crowds or leaping against exploding confetti-like backgrounds. Ogoh-ogoh is proof that the visual arts of Bali are always reinventing themselves, and that Balinese festivals are in a state of constant and thrilling renewal.

A veritable rogue’s gallery make up the repertoire of astonishing creatures carried and jostled about in ogoh-ogoh processions when any demon worth its salt is sure to make his, her or its appearance. Predominating are characters from the Ramayana and Mahabharata epics: Krishna, the nine-headed Dewata Nawasanga, giant Gatotkaca, multi-headed manifestations of Durga; an elephantine Ganesha; monstrous Kumbhakarna, as well as personages from native Balinese mythology: Rangda, her daughter Rurung, tall Barong Landung puppets and Bawi Srenggi who was cursed for his shameless ambition to marry the rice goddess Dewi Sri. 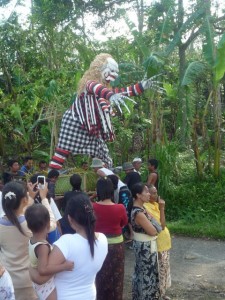 Contemporary life is seen in beasts riding the back of big chopper motorcycles, tourists swigging beer, babi guling vendors, pop culture icons, rock guitarists, robots, comic characters like Sponge Bob and Doraemon, and all manner of other zany creations springing from the fertile and demon-possessed minds of Balinese craftsmen.

Sometimes it’s difficult identifying who or what is being depicted. Asking bystanders will produce wildly different interpretations, so it’s fun trying to guess whom the figure is among all the red-faced, cryptic and unnamable beasts, brutes, salivating eyeless zombies, miserable wretches and half-god half human figures, some of who are chasing terrified children through the air.

After all the noisy revelry has died down, there’s a sense of foreboding as evening approaches. But with the serene rising of the sun the next day, the island feels somehow purged. Much like any of the Balinese perishable art forms – lamak (palm leaf decorations), giant cremation towers, Batara Kala underworld figures, etc. – the beloved ogoh-ogoh are consigned to flames in the days following the Day of Silence, having already filled their mission of neutralizing the negative forces wandering at large around the island. 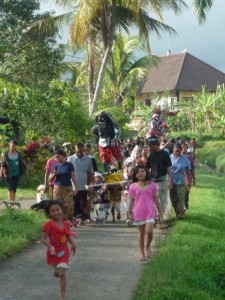 The giant puppets are created on the occasion of Nyepi, the Balinese Day of Silence, which ushers in the New Year in the Bali-Hindu calendar when no vehicles can drive on roads, no airplanes can land or depart, no illumination is allowed, no telephones can ring, no fires can be lit. The government even orders the local TV stations not to broadcast.

But don’t get the idea that Balinese just sit in the dark and meditate. Few people nowadays on Bali are trained in the spiritual disciplines. Nyepi is practiced in different ways and enforced in varying degrees depending on where you live on the island. In the cities the authorities tend to be stricter about enforcement than in the countryside where the pace is considerably slower. Rural villagers stay inside until around 10 a.m., and then go out to visit friends, hang out in the local banjar, gamble and gossip. Farmers have to feed pigs and cows that do not take a holiday from eating.

But even in our little hamlet deep in the countryside we have to totally black out our windows to watch TV on the long night of Nyepi or else we are fined. I remember two years ago while staying in a villa in far-off Tejakula, Nyepi was very rigidly enforced. I was chased off the beach at midnight by a patrolling guard even though I wasn’t bothering anyone, just sitting there in the glorious silence with the sound of the waves and the brilliant stars.

Anyone who lives anywhere in Bali can’t help but keep their thoughts from not turning inward during this special day. You don’t have to be sitting in a full lotus position surrounded by burning incense and the incantations of priests to experience inner peace. There are many moments during the hushed day and evening when everyone on Bali is left alone. I like working in the garden and doing other contemplative activities on that lovely silent day. You can hear the wind and other sounds of nature. I love Nyepi for that reason, and wish it took place once a week every week of the year.

By its very nature, Nyepi is a day when there is little to distract the mind – no loud voices, no mobile phones ringing, no radios, no honking or sounds of sputtering motorcycles. A moonless night set against a pitch-black sky punctured by faraway stars is naturally conducive to quiet reflection. Nyepi is as close to a state of deep inner contemplation as we can achieve in the Bali of today.