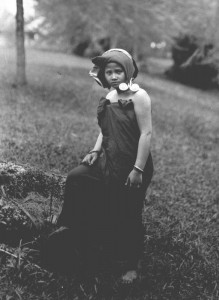 Cannibalism has long been linked with the islands that now make up Indonesia. The ancient Greek proto historian Herodotus identified a tribe who would eat their own family members rather than allow them to age.

“Another tribe of Indians, called the Padaei, who live to the East of these marsh Indians, are nomadic and eat raw meat. They are said to have the following customs. If any of their compatriots — a man or a woman — is ill, his closest male friends (assuming that it is a man who is ill) kill him, on the grounds that if he wasted away in illness his flesh would become spoiled. He denies that he is ill, but they take no notice, kill him, and have a feast. Exactly the same procedure is followed by a woman’s closest female friends when it is a woman who is ill. They sacrifice and eat anyone who reaches old age, but it is unusual for anyone to do so, because they kill everyone who falls ill before reaching old age.”

Early scholars like John Leyden and Stamford Raffles supposed the Padaei to in fact be the Batta or Batay (or Batak) based on their interpretation of Pali, “The letter p being almost always pronounced b,” said Leyden.

But they were not alone in supposing a cannibalistic mind set in the eastern islands. When the Portuguese arrived in the Melaka Straits in the early 16th century their resident note taker D’Alberquerque noticed how some of the ruling families in the numerous city states on either side of the strategic piece of water, used cannibals as executioners who were given criminals ‘roasted’ or ‘boiled’ to eat. The Portuguese noted that many of the cannibals came from a ‘country called Aru (in Sumatra) from where the King bought them to eat criminals.’

A hundred or so years later, Edmund Scott had been dropped off at Banten (today’s Banten Lama but back then the largest trading port in the region),and as if he didn’t have enough problems coping with his colleagues drinking, fighting and dying, he had the local headhunters giving him sleepless nights. “There were some Javan women that would cut off their husband’s heads during the night”, he said, adding, “They did linger much about our house,” and was convinced they would have become victims had they not kept their guard up.

You can almost sense the terror in his words as he penned his diary by candle light night after night, exhausted from the trading and infighting that took up the daylight hours. The ominous jungle hemming him in, and having no idea whether a returning ship would ever take him from “that stinking stew”, as one early entrepreneur described it, he would end his days there as so many others had.

The Bataks appear again as fearsome cannibals in the writings of Dr. Felix Maynard and Alexandre Dumas in their work, The Whalers. They describe how being eaten alive was a means of justice for people guilty of adultery, theft at night time or people who attack someone in their house.

In the cases of adultery, the offended party got to keep the ears of the offender while the Chief Judge got to keep the head for himself. Interestingly, the feast was only attended by men though the writers noted, “Women use a thousand subterfuges and employ all their seductions” to have a place at the table with the men folk. Apparently the soles of the feet cooked with rice and salt made for a most “delicious dish”.

They also suggested the Bataks used to eat their parents when they had outlived their usefulness. Apparently, when citrons ripened old men, they “were to be seen voluntarily submitting to death”. As he died, the remaining family members would whoop with joy singing:

When the fruit is ripe
It needs must fall.

The family would finish off their aged relative before cutting up the body, adding sambal and curry and enjoying the feast.

Of course how much truth there is in some of the more fanciful recollections is debatable. Missionaries used to be very active in the far flung regions of the archipelago and it suited their story to expound the dangers they faced, dealing with such savages. No doubt they found peoples’ wallets would open that much quicker when they were faced with unbridled savagery demanding to be saved by the charismatic, heroic man of the cloth. 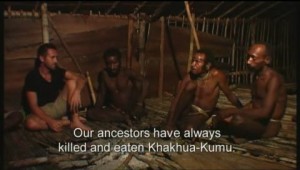 Even today there are rumoured to be tribes living in the most remote areas of Papua who are not averse to the odd bit of human flesh. One such group is the Karowai. Thought to number about 4,000, and just as famous for living in intricate tree houses, the Karowai were only ‘discovered’ by the outside world in the late 1970s. With little in the way of natural defences against the diseases that can plague a tropical home, the Karowai have come up with their own way of explaining illness or death. Anything they can’t explain is down to khakhua or witches.

The Smithsonian Magazine sent an intrepid reporter into the Papuan jungles to meet with the Karowai. It was explained to him that the khakhua would disguise themselves as a friend or relative of the person they wished to kill, then set about eating the insides of the victim as they slept, considerately replacing them with fire ash so as not to disturb the victim. Before the victim breathes his last they will tell his relatives the name of the khakhua, effectively signing his death warrant.

One of the Karowai described what happened in one case. A cousin of his was dying and told them who the khakhua was. They caught the ‘witch’ and fired arrows into his body before cutting his head off. They then cut the body up, carefully wrapping the flesh in banana leaves before handing them to other members of the community to eat.

It so happened that the ‘witch’ was a friend of theirs, but that didn’t matter, explaining it was a “system of justice.”

Of course the Korowai don’t consider themselves as man eaters. “We don’t eat humans,” one said, “we only eat khakhua.”