On July’s windy days, the skies of Denpasar fill up with kites. These grand birds and fish dance and glide with the glee of children (of all ages, of course) tugging at their strings. The skies aren’t the only crowded thoroughfares, though. As the hectic winds of change attempt to cast away the final clumps of cloud for Bali’s cooler yet sunnier dry season, blue skies beckon guests from near and far, filling up Bali’s streets with traffic.

Bali prepares for the onslaught with frenetic activity. Stuck in traffic with several meetings on my agenda, unsure which to cancel and which to go to, I am reminded of my omnipotent nemesis, one of the six enemies within me (the Balinese version of the seven deadly sins): Confusion. And it is in times like these that I invoke the divinity within me also, this time as Catur Muka, the four-headed-god facing the four cardinal directions. Expanding my spatial awareness, I assume a statue’s stillness even as I glide (or grind, mostly) through traffic. Observing all the goings-on around me.

There are many Catur Muka statues that, like Janus in ancient Greece, guard the crossroads of Bali. My favourite stands proud in the heart of Denpasar, at the intersection of Jalan Surapati, Jalan Udayana, Jalan Veteran and Jalan Gajah Mada. It is across the Puputan Badung square from Jagad Natha Temple.

To appreciate this statue, it is not enough to drive around it twice (as I like to do when in a rush but wanting to appreciate this marvel). I prefer to walk towards it from the South, past the Denpasar Mayor’s office, to the 9-metre-tall granite statue.

Unlike its skinnier cousins around the island, the Denpasar statue is impressive for its finely balanced proportions. It is the work of artist I Gusti Nyoman Lempad of Ubud, commissioned in 1973, at a time when the Balinese government was facing a brave new future. The government had established the Ngurah Rai International airport in 1969 and acquired the Bali Beach Hotel in Sanur the same year (as a post-war reparation gift from the Japanese Government). When the local legislature issued a decree to erect this statue in 1971, the government had just established the Nusa Dua tourism zone. 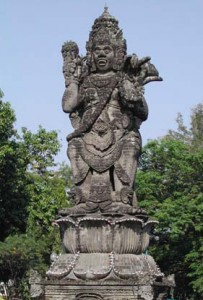 Catur Muka is a depiction of Brahma, God as Creator. He stands upon a lotus petal, symbolizing a pure universe. In his four hands, the creator-and-ruler-of-the-universe holds a rosary, a whip, a chakra wheel and a tusk, symbolizing purity of knowledge, certainty of law, divine justice and implementation of law. The rope around the statue’s torso symbolizes the Maya (world of illusion) binding the atman (soul) to the cycle of reincarnation.

The government directive embodied by the statue is “Denpasar must be built based on Balinese philosophy”.  The rampant development in Bali of late suggests otherwise.

When taking into account the fact that during the previous Dutch colonial period, on this site stood a town clock that would chime every hour, reminding the locals of who was in charge, one can also consider the statue as a symbol of identity restoration.

The clock now wallows in Museum Bali, two blocks away. One can easily be pessimistic that in doing away with the clock, the Balinese have forsaken discipline and the mechanism of order for mysticism. Or that the Catur Muka statue depicts the Balinese soul firmly bound by the rope of Villa-realty illusions.

But I prefer to put on four bold faces. One looks to the past and sees a history of violence and repression and is glad for the present freedoms. Another looks into the future at a generation growing up with an awareness of Bali’s place in the world and prays that they will learn from their parents’ mistakes. A third looks at the price-wars under-cutting businesses around the island as a necessary evil to remind stakeholders of the necessity of regulations and ethics.

The final face I put on before the tax man and government officials insisting upon their dues without contributing much but more burden to businesses. It is a bold face obedient to the laws of this island, both spiritual and man-made. It is a face that intends to remind the Mayor of the values of good-governance enshrined in the Catur Muka statue at the next meeting.

The History of Mapping Australia