Indonesia’s Most Loved Beer and the History Behind the Label

A holiday spent in Indonesia most likely revolves around a bottle of Bintang. It is a household name and the perfect thirst-quencher to help one survive the tropical heat of this archipelago. For years now Bintang has always been a favourite amongst locals and foreigners, both because of its great light taste and the fact that this beer can be easily found all over Indonesia. 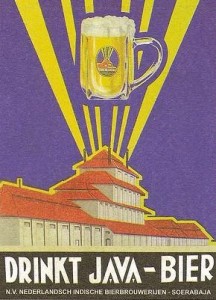 Considered a pilsner beer, as it is a clear, bottom fermented lager, the name Bintang means ‘star’ in Indonesian. Sold widely across the country, Bintang is available in almost all bars and restaurants, supermarkets, 24-hour convenience stores, side-street kiosks and food vendors. A Bintang can or bottle costs around IDR 12,000 to IDR 18,000 and with its 5% alcohol content, Bintang is considered a light beer. The questions on how it all started, and how this beer became a true shining ‘star’ as a famous local brand, and why Heineken is said to be Bintang’s sister beer, are all based on facts that interestingly intertwine with how Indonesia used to be a Dutch colony, with the focus of attention at that time being on the island of Java.

The brewery where Bintang beer was born, was founded in 1929 under a company by the name of NV Nederlandsch Indische Bierbrouwerijen. Initially established in Medan, this company’s sole brewery was in Surabaya, and its first brand was Java Bier. In 1936, Heineken NV became a major shareholder and as this happened, the company name then changed to Heineken Nederlandsch-Indische Brouwerij Maatschappij. The following year the company introduced Heineken beer to the Indonesian market for the first time.

During the Second World War, the company ceased the production of Heineken beer, but not long after Indonesia’s Independence in 1947, Heineken Beer was reintroduced to the Indonesian market. This comeback proved to be successful, so in 1951 the company’s name was again changed to Heineken’s Nederlandsch-Indische Bierbrouwerijen Maatschappij NV, with the sale of Heineken Beer back to full force on the local market. But since this was during the years of Indonesia’s Guided Democracy, a situation that lasted from 1957 until 1965, the Indonesian government took over many aspects of local businesses – and this forced Heineken to cease work as technical advisor for the company and also prohibited the use of the Heineken brand once and for all. Hence the birth of ‘Bir Bintang’, and what was before a Heineken beer was changed into this local brand with a local name. The company name also changed into Perusahaan Bir Bintang.

In 1967 Heineken resumed activities in Indonesia and with the renewed technical assistance of the Heineken company, the quality of Bintang beer was again brought up to international standards. Bir Bintang was re-launched under the name Bintang Baru. After changing its name several times, Perusahaan Bir Bintang as a company went public in 1981 and adopted a new name, PT Multi Bintang Indonesia. Today, PT Multi Bintang Indonesia Tbk is the leading beer manufacturer in Indonesia which produces and markets a range of trademark products, including Bir Bintang, Heineken, Guinness, Green Sands, Bintang Zero and Recharge. The latest label change that took place to rejuvenate Bintang beer happened in 2006. A dominant beer producer in Indonesia, Multi Bintang Indonesia relies on Bintang Beer to cover more than 55% of the local market – and even reaching 70% in regions of East Indonesia and North Sumatra.

Although of Muslim majority, Indonesian people are generally still keen beer consumers, proven by the fact that Bintang Beer sells 50 million litres of the lager domestically every year. This is despite the fact that the price of Bintang, while cheap for westerners, is still relatively high for locals.

Bintang, though of good quality and refreshing taste, does not really have a distinctive flavour. As with most other beers, Bintang is ideally enjoyed when cold, especially ice-cold. In Indonesia’s more remote villages, the hope of finding an ice cold Bintang more often than not fails due to lack of refrigeration – and you’ll have to drink your Bintang warm. But at least they still sell Bintang! Whether drunk on its own, with fried peanuts and melinjo crackers as are often served in quaint Bali bars, with barbecued assortments, or spicy Indonesian food, the beer serves its purpose confidently and well.

An American tourist in Ubud wrote in his blog about how he and his wife coped with their trip under the scorching Bali sun and survived, “Always order a LARGE Bintang beer”, he advises. “It’s as much as two small ones and it will cost thirty percent less. You know you’re going to have at least two anyway, right? If you don’t know that now, just wait till you get here and realize the average temperature is somewhere between soaking in sweat and heat stroke.” There’s a bit of traveller’s wisdom for you.

In the capital city of Jakarta, be it while strolling along the questionable-but-fun Jaksa strip, or sitting in charming old bars like Dyna Pub, or hanging out in cheap-beer places like Beer Garden or Melly’s on Wahid Hasyim, to having dinner or drinks in more posh places like Potato Head or Jackrabbit, look for a bottle or a draught glass of Bintang – and without a doubt you’ll find it. But whether in Bali, Jakarta, Jogjakarta, in other tourist or business areas where people spend time roaming the city streets and buildings for leisure or work, the prospect of grabbing an ice cold one in the middle of a steamy afternoon always sounds like a good idea.