My Pembantu, Mami, who has worked for me for eight years mentioned after my asking how her weekend was that she had taken the bus from Sanur to Kuta to go shopping at Discovery Mall and revealed it was cool inside and for now, free. Now… as you all know, a Brit like myself can never turn down a bargain, furthermore a Scot; not taking advantage of anything “free” is frowned upon let-alone sacrilege. However, being the sceptic that I am and especially having lived in Jakarta for 10 years and Bali for two, hearing the word “FREE” in Indonesia didn’t sit well, the sceptic and dour Scotsman came out.

Anyways, leaving my sour heritage and genealogical cynicism aside, I decided to take the free bus for a late morning coffee at Mall Galleria starting from my domicile Jl Danau Poso, Sanur. I arrived at the bus stop and as luck would have it a fellow bus traveller was sat listening to his iPod waiting for the bus, Isa Wahyudi of Jawa Tengah, now residing in Sidakarya. Through numerous “Apa?”, and, “I no speak English”, we surprisingly managed to make conversation.

Isa told me that sometimes you may wait up to an hour or two for a bus, as you can imagine – this was not the greatest start to my journey. Isa explained that this was the third time that he has taken the bus and that he enjoys it and that he was now on his way to Nusa Dua to meet a client – Isa is a travelling salesperson, his product, china massage oil. When asked about his views of the recent transport system he exclaimed, “It’s free and AC!”

After an enjoyable 10 minutes of meeting a new friend, the bus arrived, the driver in full dress uniform, tie, hat and sunglasses; immaculate, think Navy Officer – I was in safe hands. 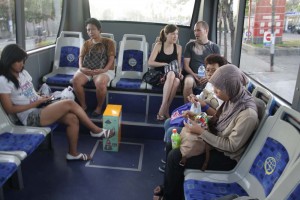 After the “swish” of the doors closing, I was then greeted by the bus conductor. It was cool but not freezing, the bus was modern, there were handles for standing passengers, the bus wasn’t jammed packed, children were playful but behaved, there was a bus conductor!; the atmosphere was very lively and with the number of children; it had a school field trip feel. “Where am I?”, “Where are the noisy teenagers”, “Where are the grumpy OAPs”, “Why isn’t there Wayan 4 Dewi inscribed on the seats?”, only buses on 50’s American Dream Adverts could compare.

I asked indirectly to the back of the bus (where the majority of passengers were) in my broken Bahasa what they liked about the bus. Roars of “DINGIN!!”, from children and teenagers erupted and after speaking to Ulan and her daughter, also Ulan, 11 years, I’d found that they were all one party, mothers and children from Batubulan heading to Nusa Dua Beach for the day while the children were on school holidays.

My return journey started off a lot quieter, to begin with. I spoke with Putu the conductor (this was her first week) and she told me that the majority of passengers were locals, however, she had seen some “Bules” on board. Komang, marketing for an adventure tour company, was on his way to the office in Denpasar from a meeting in Kuta and regularly journeys on the bus. Mid-journey we stopped at Lotte Mart, a group of well-to-do locals climbed on board and spoke very coherent English. Reni, a Housewife from Denpasar said that the party had taken the journey for the bus journey alone, the children had never been on a bus before and in true family-trip spirit they had brought snacks and soft drinks for the children gazing out the windows whilst they gossiped and took photos.

Aside from the crossing of the roundabout to get to Discovery Mall, which honed in on my “Neo from The Matrix manoeuvring skills”, it was a great way to spend the morning. If you fancy a day trip out or a change of scenery I would definitely recommend what could be Indonesia’s first International Standard Public Transport System. It’s entirely free for locals, tourists and expats alike until August 31st, 2012.