Indonesia’s top Islamic authority is warning the country’s Muslims to beware of fake holy water being marketed as a miracle cure from an ancient well in Mecca, Saudi Arabia.

The water in question is called zamzam. When genuine, it comes from the Zamzam Well, which is located inside the enormous Grand Mosque in Mecca. Devout Muslims believe it is a divine gift that can cure illnesses. Scientists describe the water as brackish – similar to seawater due to its high mineral content of sodium, chloride and magnesium.

What does the name Zamzam mean? According to Islamic history, the prophet Ibrahim (Abraham in the Bible, and Avram in the Torah) took his wife Hajara and their baby son Ismail to the future site of Mecca when it was still uninhabited desert. God ordered Ibrahim to return home, leaving his wife and son alone with only a goatskin of water and some dates. When the water ran out, Hajara could no longer produce enough milk to feed Ismail, who almost died. Hajara ran around the nearby hills, looking for water but found none. On her seventh run, a helpful angel appeared and kicked up some dirt, causing water to flow forth. It flowed so quickly that the angel (or Hajara, depending on which history you read) uttered “zamzam” – meaning “slow down”. Mecca was subsequently constructed at the site by the grandsons of Ismail.

These days, water from the Zamzam Well is pumped to a purification plant, then piped back to the Grand Mosque and provided to Muslims who make the annual haj pilgrimage to Mecca. Pilgrims can drink a cup or fill an empty bottle from coolers inside the mosque.

For many visitors, this is not enough – they want to take home some zamzam as a souvenir to share with relatives, friends and neighbours. The Saudi government therefore permits airlines to bring back 10 litres per departing pilgrim. The problem for Indonesian pilgrims is that national flag carrier Garuda reduces this quota to just 5 litres per person – ostensibly for safety reasons lest older planes become overloaded.

The officially allocated water comes in mandatory SafeWrap brand packaging, which has distinctive orange, blue and yellow markings, and Arabic and English lettering.

The commercial export of zamzam is banned, yet the sacred water is offered by many vendors in Indonesia, complete with SafeWrap packaging. Much of it is fake. Demand increases ahead of Islamic holidays. Some of the vendors are haj travel agents. The water can also be purchased online and at Central Jakarta’s Tanah Abang textile market district.

Police on April 1 arrested four people at a house in Srengseng, West Jakarta, where they had been rebranding Aqua drinking water as zamzam, which was sold from a shop in Tanah Abang.

The water was priced at Rp.25,000 per litre and Rp.10,000 for a 300 ml bottle. On the same day, police in Kramat Jati, East Jakarta, raided a factory that was producing fake zamzam and fake olive oil, the latter being regular palm oil. The suspects face up to five years in jail under laws on consumer protection, health and food.

The Chairman of the Indonesian Ulemas Association (MUI), Din Syamsuddin, urged Muslims not to be gullible when they see zamzam offered for sale in Indonesia. He said producers of fake zamzam would go to hell. There is presently no halal certification for zamzam.

Legislator Saleh Partaonan Daulay, a member of the Islam-oriented National Mandate Party, said many returning pilgrims buy zamzam in Tanah Abang because they feel they have not brought home enough. He said counterfeiters should be charged under the Criminal Code’s Article 383, which carries a maximum sentence of 16 months for deliberately deceiving buyers by providing false goods. 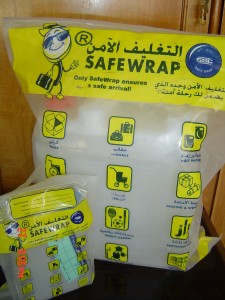 Police said they would take samples of zamzam from vendors for testing and arrest anyone found to be selling contaminated water. There was a health scare in 2010-11 when the British media reported that zamzam being sold in the UK contained dangerously high levels of arsenic. Saudi authorities responded by declaring that any contaminated zamzam must be fake. In Indonesia, there is no routine lab testing for the authenticity of zamzam, although the National Agency of Drug and Food Control recently conducted microbiological analysis of 32 samples and found the water to be generally safe for human consumption.

The chief imam of Jakarta’s Istiqlal Mosque, Ali Mustafa Yaqub, lamented the prevalence of religion-linked scams. He said bogus holy water can be identified, although not very quickly, as it will start to become murky after being stored for several years, whereas genuine zamzam should remain clear.

Police in Central Java last year busted a major producer of fake zamzam. Thalib bin Saeb (58) had worked for 36 years in Saudi Arabia, mostly as a cleaner at the airport. After returning to the Central Java capital of Semarang, he set up a zamzam importing business but it collapsed in 2009 because of the export ban. Eager to profit from strong demand, he created his own zamzam by distilling water from an artisanal well.

Operating a factory disguised as a cattle feedlot, he was able to produce up to 36,000 litres of bottled water per day – mostly 5 litre bottles, always wrapped in bogus SafeWrap packaging. He sold the water for Rp.14,000 per litre.

Thalib supplied dealers in Jakarta and other major cities, earning over Rp.4.3 billion ($333,000) in 2012 alone. He was charged with running an industrial business without a license, for which he could have faced five years behind bars and a Rp.2 billion fine. Semarang District Court ended up sentencing him to two years and six months. Judges said they spared the white-bearded man a heavier sentence because he had apologized and was polite during his trial.

Also arrested in Central Java last year was a man named Mohamad Huda Al-Ajam (48), who reportedly ran a zamzam factory in Batang regency. Police initially accused him of diluting genuine zamzam with regular water, which was then sold for Rp.140,000 per 10 litre container. Reports said he had a smooth distribution network involving a haj bureau and agents in many cities. But by the time Huda’s case reached state prosecutors, he was accused only of failing to have a complete business license. Police then claimed he had merely purchased zamzam from an importer in Jakarta and resold it for a profit.

Zamzam can be bought from several Indonesian websites, such as www.tokoherbalmuslim.com, which sells it for Rp.125,000 per litre and claims it can be used to help treat disease. The same site also sells Horse Brand Virility Honey as a cure for impotence, and capsules for tightening the vagina.

Another online vendor, www.obat-herbalku.com, describes zamzam as “the drink of nobles” and the “best water on Earth” because it can cure various diseases “with God’s blessing”. The site also sells premature ejaculation remedies, penis enlarging oil and breast-firming soap. A vendor selling 10 litre containers of zamzam for Rp.300,000 in East Java claims it is beneficial to unborn babies.

There’s no harm in buying and drinking salty water if it is uncontaminated and you think it will do you good. The only harm is when sick people or their families insist on using miracle potions to deal with serious illness, rather than seek medical treatment.

The best way to stop the fake zamzam scam would be to eliminate demand by educating people that all clean water is precious, regardless of its source – and that spiritual purity comes from within.