Waste management seems to be a perpetual issue in Jakarta and Bali. When beaches, streets, and other places of interest are littered, it tarnishes Indonesia’s reputation as an otherwise beautiful country.

That’s why Bruce Waterfield, Business Services Director of Coca-Cola Amatil, believes it is the industry’s responsibility to set an example of making clean environments happen.

And of course, clean environments don’t just happen. In an era of manufactured products and commercial packaging, tonnes of garbage are generated each day in Jakarta and Bali. And where littering still seems to be the norm, cleaning up after a place is not just about picking up trash—it’s about changing mindsets and ways of life.

When Jakarta Expat asked Coca-Cola Amatil to sponsor the upcoming Clean Up Jakarta Day, Bruce found the project in line with what his company has already been doing in Bali.

“In the wet season, a lot of waste ends up on the beaches in Bali,” said Waterfield. “Much of these don’t come from Bali – some floated all the way from Java which is about 100 kilometres across the sea. There are days when the waste is knee-deep.” Rubbish collection on such days could amount to 30-40 truckloads in one day.

“Bali is the gateway to Indonesia, so Bali plays a great role in forming international tourists’ perception of the rest of Indonesia,” added Waterfield. “The majority of tourists who come to Bali go to the beach. In the wet season, these tourists face a huge amount of rubbish.”

According to Waterfield, about 22% of Bali international tourists come from Australia. “Why shouldn’t one of the biggest Australian Companies doing business in Indonesia take a role in making a positive impact to make the environment a better place for Indonesians and tourists alike to enjoy?” asked Waterfield.

Waterfield says that the Bali Coastal Clean Up has removed more than 16,000 tonnes of waste from 10 kilometres of south Bali’s western coastlines in Kuta, Legian, Seminyak, Jimbaran, and Kedonganan. “We’re not interested in a mere feel-good campaign, but one to change the behaviour of tens of millions of people in Java and Bali toward waste management, to make significant difference in the long run. The industry has a greater responsibility to do something positive everyday about the environment from which it makes profit.”

Since a “clean up day” would not be enough to achieve that objective, the Bali Coastal Clean Up has become a project that continues on a daily basis. Now partnering with Quiksilver and Garuda Indonesia, the Bali Coastal Clean Up currently employs 76 permanent staff members who work to clean up the beach. Many of these workers were illiterate women when they started, but learned to read and attend classes on sustainable waste management in a weekly program run by the Roll Foundation.

Waterfield said that he would love to see the Clean Up Jakarta Day transpire into something bigger each year as more industry, more communities, and the government get involved. 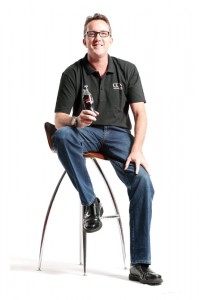 Most Coca-Cola products today are packaged in recyclable PET bottles. “Indonesia is in fact a very good recycler of PET,” said Waterfield, citing that about 90% of PET waste in Indonesia gets recycled. “But this process relies on the informal business of scavengers.”

This presents the bigger issue that a lot of other rubbish doesn’t get recycled because they are perceived to be of no economic value. Waterfield said that with innovation and technology, much more waste generated in Indonesia can be recycled into economically valuable products. “But the industry can only do so much. We need the government’s support to change the people’s perception of waste as a valuable asset for economic empowerment.”

In India and Europe, plastic waste is recycled into roofing tiles, according to Waterfield. He said that while this innovation is still “new and untested” in Indonesia, there are companies that have made their move toward such innovations, such as a start-up based in Bali that produces pellets for packaging from plastic bags thrown in landfills.

One of Coca-Cola Amatil’s recycled products is polyester uniforms for about 7,000 of their employees—made from PET bottles. The company’s partnership with Quiksilver has also produced competitively priced Roxy brand T-shirts made from a blend of organic cotton and recycled PET polyester.

In addition to recycling, reducing is another important element of sustainable waste management. Coca-Cola makes its own bottles on site so it can control the development process of the bottles. Since 2008, Coca-Cola Amatil has reduced the amount of virgin PET used in the production of their bottles by 22%. Innovations are also implemented to make bottles more lightweight than they were before.

“Consumers create demand for packaging and innovation resources,” said Waterfield. “Consumers today demand packaging that is convenient to their needs. Lightweight PET bottles that are resealable, easy to carry, and 100% recyclable currently fill that need. But there still needs to be improvement in the supply chain to capture the waste when consumers finish using the product.”

Coca-Cola currently promotes that responsibility on the packaging labels. “But the message also needs to be available in different facets; radio, television, and the general community,” said Waterfield. “More importantly, the message needs to be good enough to change consumer behaviour. Behaviour is usually driven by incentive. If it means that our consumers get to live in a cleaner and healthier environment, then that is a reason to collaborate in this joint effort to make it happen.”

In Bali, not only people have enjoyed this benefit of a cleaner and healthier environment. Since 2008, while starting the Bali Coastal Clean Up, Coca-Cola Amatil and Quiksilver also started supporting a local turtle hatchery project. Between 2008 and 2013, the project has rescued and hatched 74,598 turtle eggs and released the hatchlings to sea.

A giant turtle-shaped incubation centre has also been established at Kuta beach. “This makes a fun destination where tourists and locals can go and learn that turtles are coming back to Kuta. There has been a direct correlation between the now cleaner beaches and the return of the turtles to lay their eggs,” said Waterfield.