One night in 1998 after a gig in Manila, a woman approached me and my band and asked if we would like to be in a movie. Scenes of fame and fortune flashed before our collective eyes and we immediately began discussing how we were going to spend our millions. “Wine, women and song and waste the rest”, was the consensus as we clinked our glasses together vigorously and slapped each other on the back. The day had finally arrived! Then a sober moment. “Wait!” our keyboard player guy suddenly shouted over our excited chatter, “It’s not a porno is it..?” We froze in silence for an instant and all eyes fell upon the woman. An uneasy moment passed as she swallowed a mouthful of beer. Then she said, “No, no, nothing like that… I want you as foreign extras for a girly bar scene we’re shooting near here next week.” Ah. So we had been type-cast as sleeze bags rather than rock stars and the film was not about us at all. We looked at each other. “Girly bar scene?” our lead guitarist Jack repeated incredulously. Then his face lit up. “Yeah baby!” and the celebrations started again. We were easy to please. 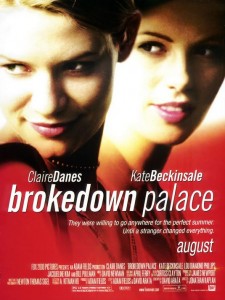 The movie was Brokedown Palace, starring Claire Danes, Kate Beckinsale and Bill Pullman and directed by Jonathan Kaplan (who currently directs Law and Order: Special Victims Unit for TV), and we were indeed cast as foreign sleeze bags frequenting a girly bar called Lollipop which was supposed to be in Bangkok, but was actually The Cotton Club in Pasay City Manila. They couldn’t shoot in Bangkok because the movie is a true story and it is critical of the Thai legal system and the way it treated the two girls played by Danes and Beckinsale during their drug smuggling trial. Blah blah blah, who cares, back to the girly bar scene.

We showed up early in the morning at The Cotton Club as directed and we were immediately sent inside to take up positions around the bar for the filming. An American woman was in charge of extras casting and everyone had to file past her for selection as if she were a modern-day Mengele. She glanced at us and then pointed towards the area of the bar where she thought we would best fit. For some reason I got sent to sit at the bar right next to where Claire and Kate would be doing some dialogue, and I was given the role of “Tall sleeze bag” who, on a certain lighting cue, would walk up to the stage where the girls were dancing and ask one of them to join him for a drink at the bar. My resentment at this type casting was cancelled out by my eagerness to see the stars close up.

Suddenly a door opened and about 30 young Filipinas walked in wearing nothing but bikinis. Every one of them was very pretty, and every one of them was very well cast, if you know what I mean. They slowly took their positions on the stage, then lights started flashing and on cue they began to dance in time with imaginary music. Claire and Kate arrived and took their positions, and when Kaplan shouted, “Action!” they began their dialogue in the strange flashing silence (the background music is added later, otherwise they wouldn’t be able to record the dialogue). I saw my lighting cue, climbed off my stool as I had been instructed, walked up to the stage and silently asked the girl to join me at the bar. As I walked back to the bar with her, I heard “Cut!” and the scene was finished. Well at least, that version was finished. Then a magical voice said, “Right, let’s get these girls’ tops off…” Yep. There was to be an 18-rated version for certain markets and we had to do it all again surrounded by topless girls. I missed my cue the first time during the second version. I snapped back to reality when Kaplan shouted, “Cut!!! Where is Tall sleeze bag?” I had to apologise. It was hard to concentrate. I hear the film was a horrible flop but it’s one of my all-time favourites even though I’ve never seen it.

Winning and Losing on the Slots