“We have been caring for and rehabilitating these birds at our wildlife rescue centre in Tabanan, Bali for the past year. I am so glad we were able to secure a permit to release them, and they are now back in the wild,” says FNPF’s Founder and CEO, Dr. I.G.N. Bayu Wirayudha.”

FNPF’s wildlife rescue centre at Tabanan in central Bali – one of only seven such centres in Indonesia – provides a vital link in the process of returning distressed wildlife to their natural habitat. FNPF took over the running of the 3,200m2 facility in 2011. FNPF cares for, rehabilitates and releases native endangered wildlife, most of which are the victims of illegal trading and poaching.

“We left our rescue centre in Bali about 10pm last Sunday headed for Gilimanuk and the ferry to the nearby island of Java. We wanted to go at night so that it wasn’t hot for the peafowls, so they would be as comfortable as possible,” says Dr. Wirayudha.

The FNPF team and its precious load arrived at the national park, on the eastern tip of the island in Banyuwangi district at around 5am. Dr. Wirayudha continues, “We held a Hindu ceremony to offer the birds to God and get blessing before setting them free. We hope by doing this the bird not only get protection by the ranger but also God.”

“They will do well while in the park – they are ground birds, they are healthy and no longer tame. There are plenty of foods and water for them. As soon as they were released they went towards the trees, and after 15 minutes they had headed toward a river – these are very good signs.” 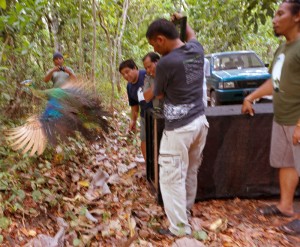 The forest within Alas Purwo National Park, a natural habitat of the peafowl, is the last natural forest in Java that is protected from illegal logging.

Untung Susilo, Head of Protection Affairs at National Park Management Section I Tegal Eastern Region, said he welcomed and supported the release by FNPF. “This is good to increase the population of Javan green peafowl. They are already independent and do not need to be protected all the time by people or conservationists.”

Along with the FNPF staff, two representatives from the Department of Forestry’s Natural Resources Conservation Agency (BKSDA) Bali made the journey to Alas Purwo National Park.

Made Sudarma from BKSDA Bali says, “I am impressed with today’s release and the location as well. The animals have to be preserved and restored to their native habitat.”

At its wildlife rescue centre – known as the Bali Wildlife Rescue Centre – FNPF has been able to help the birds develop their wild instincts. “We are greatly helped by BWRC not just today, but from when BWRC first opened. Hopefully BWRC will gain more support from the community,” added Made Sudarma.

Dr. Wirayudha said there are two other Javan green peafowl (Pavo muticus muticus) at FNPF’s rescue centre. “One has a toe defect and the other is still too tame, and so at the moment neither can be returned to the wild. We will find out the way to ensure these two green peafowl can eventually be released.”

FNPF thanks the Humane Society International (Australia) for funding the rescue centre’s operation costs since they took over operations. For more information on their work visit www.fnpf.org