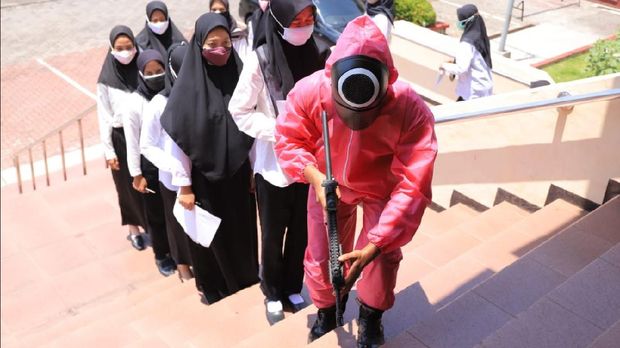 The popularity of the South Korean survival series, Squid Game, has arrived at the Basic Competency Selection (SKD) test for Civil Servant Candidates for the Formation of Prisoners and Immigration Inspectors in the East Java Regional Office of the Law and Human Rights Ministry.

The officers supervising the test are getting dressed up as the guards from Squid Game. They have worn pink suits and masks with square, circle, and triangle symbols.

The atmosphere of the Squid Game was emulated for the participants during session two on the 12th day. The new invigilators were in the courtyard of the 17 August 1945 Universitas Gedung in Surabaya.

A siren blared and from inside the building and five pink soldiers appeared. The gripping soundtrack accompanied the guards who were equipped with long-barreled weapons, approaching the participants.  Instead of being afraid, the examinees were amazed and gave lively applause.

The Regional Office Head of the Law and Human Rights Ministry in East Java, Krismono, said that his party really wanted to create a different atmosphere in the selection of civil servant candidates this time.

“We want to make the participants relaxed and happier,” said Krismono.

Squid Game was chosen because there are similarities between the South Korean series and the selection of civil servant candidates. In the TV series, participants had to go through various obstacles in the game leading up to a prize for the last survivor.

The participants’ mental readiness is one of the determining factors when assessing their responses to questions. Many participants were too tense and so, with the creativity of the committee, he hoped it would ease the tension a little.

“We hope that through this selection we will get people who are intellectually qualified and with integrity,” he expressed.

Meanwhile, one of the test selection participants, Aini Sholikah, admitted that she was happy with the gimmick of the invigilators who imitated the Squid Game series. “It’s really fun, it makes me happy. I also happen to like the series,” said Aini.

Bali Featured on List of Top 25 ‘Countries’ for Retirees