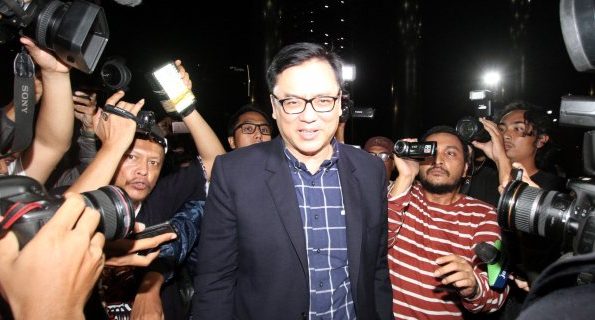 The Corruption Eradication Commission (KPK) has apprehended Billy Sindoro, an executive of diversified conglomerate Lippo Group, after naming him a suspect in a bribery case concerning the issuance of property permits for the modern city of Meikarta, the group’s flagship project.

“Our team arrested BS at his residence and are taking him to the KPK headquarters for further questioning,” KPK spokesman Febri Diansyah said on Monday night, referring to Billy by his initials.

The businessman was named a suspect in the case after other Lippo Group consultants and an employee who allegedly bribed West Java’s Bekasi Regent Neneng Hasanah Yasin had testified they “had done so at the instruction of Billy,” said the antigraft body’s deputy chairman Laode Muhammad Syarif. The bribe money totaled Rp 513 million (US$33,727) and S$90,000.

“He was aware of and gave instructions to other individuals who acted as consultants for the company,” Laode added.

The graft busters could not initially locate Billy after naming him a suspect but eventually found him hours later.

The Meikarta case is the second corruption case that Billy has been implicated in, as he was convicted of bribery in a broadcast monopoly case in 2009.

At the time, the antigraft body suspected Billy of bribing a member of the Business Competition Supervisory Commission (KPPU), Muhammad Iqbal, to influence the ruling of a case pertaining to broadcasting rights of a sports program.

A team of KPK investigators arrested Billy, who served as the then-president director of cable television company First Media, a subsidiary of the Lippo Group, at a hotel lobby in Jakarta during an operation in September 2008 and seized Rp 500 million that the businessman gave to Iqbal.

The corruption court eventually found the businessman guilty in the case and sentenced him to three years behind bars and a fine of Rp 200 million.

Billy is not the only Sindoro to have been implicated in a graft case handled by the antigraft body. His younger brother Eddy Sindoro was also named a suspect in November 2016 in a bribery case involving Supreme Court secretary Nurhadi.

Eddy was accused of tampering in the handling of a case review in the court by instructing his subordinate to bribe Central Jakarta District Court clerk Edy Nasution to influence two cases relating to the Lippo Group at the Supreme Court.

After being named a suspect in the case, Eddy fled abroad and lived in different places in the span of two years between 2016 and 2018. He eventually surrendered to Indonesian authorities in Singapore on Friday. The KPK has detained Eddy ever since.

Top Indonesian Coffee Beans That You Can Order Online