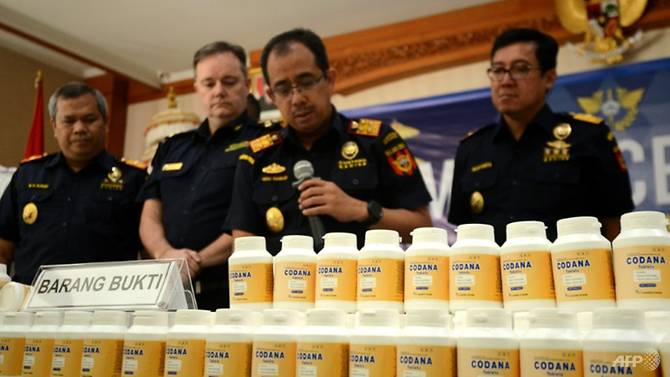 Bali police said on Monday (Jul 16) they had intercepted a huge haul of Australia-bound cold relief tablets that contained a key ingredient for making illicit drugs.

Some 600,000 pseudoephedrine tablets being sent from South Korea to Australia were found during a stopover on the Indonesian resort island, they said.

The bust happened in January but was announced on Monday.

Indonesian authorities said they were tipped off by their counterparts in Australia.

Bottles of the pills, weighing nearly 140kg in total, were labelled as health food, authorities said.

A resident of Australia, who was not identified, had been arrested by Australian police over the haul, Pambudi added.

“We support efforts to resolve legal processes by ABF and the Australian investigation team by providing access to information on the results of the examination so that the consignee can be secured,” Bali director general of Customs and Excise Heru Pambudi said.

In the first half of 2018 alone Bali’s customs office said it had seized 3.9 tonnes of drugs and ingredients used as methamphetamine precursors that were being smuggled through the island.

Indonesia Upset by Trump’s ‘No Entry’ Order for Refugees

A History of Food Scare Scandals in Indonesia