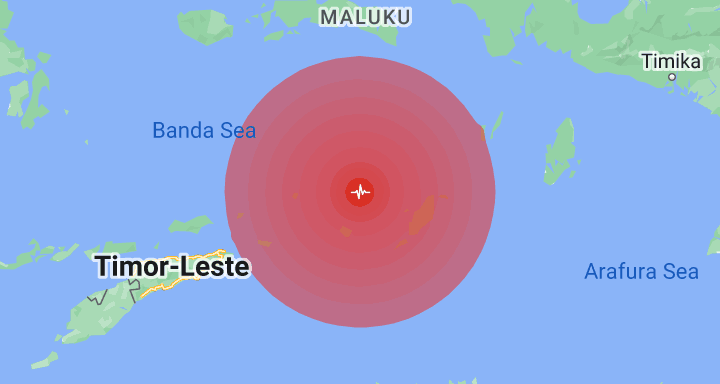 An earthquake with a magnitude of 7.5 in Maluku Barat Daya Regency, Maluku Province occurred at 12:47am local time.

It no longer holds the potential for a tsunami, despite the quake being felt all the way to Australia.

Likko said residents in Letmasa Village panicked when the earthquake occurred. A number of them with damaged homes are now temporarily evacuated.

Confirmed separately, Tual Police Chief AKBP Prayudha Widiatmoko said the earthquake had caused residents in Tual City to react the same way but have reportedly returned to their daily activities.

“Until now, we have not received any reports of casualties or material casualties due to last night’s earthquake,” said Widiatmoko.

Although there have been no reports of casualties or damage, Widiatmoko said he would continue to patrol a number of points to monitor the condition of residents after the earthquake.

“Our patrols are also still carrying out activities to simultaneously record if there is a possibility of casualties or material damage due to last night’s earthquake,” he concluded.

The earthquake was reportedly felt further east to Papua as well. Quoting AFP, neighbouring countries Australia and Timor Leste felt the shocks, too.

In Darwin, the capital city of Australia’s Northern Territory, at least 1,000 people made reports regarding the earthquake to the Australian Geosciences agency.

“Could hear the earth rumbling,” wrote a Darwin resident on the EMSC website. Other residents who felt it commented that the earthquake felt very big with their whole house shaking.

After approximately four hours, the initial tsunami warning was stopped by the agency. Aftershocks occurred with a magnitude of 5.5.

“The tsunami early warning was declared to have ended at 3:43am WIB,” said the Head of the BMKG, Dwikorita Karnawati at a press conference on Tuesday morning.

BMKG conducted a tsunami observation test to monitor the movement of sea level rises. Based on the results of tsunami modelling with updated parameters (M 7.5), it did not indicate a tsunami potential.

Nevertheless, Karnawati said that her team would still continue to monitor sea level movements and inform the public.