Every morning at 4am, Hadi and the team from Rumah Makan Cahaya Baru 99, a hidden Padang gem in the belly of Benhil, head to Pasar Senen in search of the rich spices and savoury ingredients that make the tiny restaurant one of the most sought after spots in Jakarta. While most of us would scoff at the idea of getting up well before the rooster to serve hungry customers, Hadi relishes it. He enjoys the constant brow of sweat that comes from turning over tables and scooping steaming rice onto beds of banana leaves for take away orders. There’s a pride most of us will never know that comes from serving customers and taking their complements to heart.

The fact that Hadi and his team have perfected the West Sumatra delicacy isn’t what makes 99 special. It’s not just 28 dishes of Indonesian delicacy stacked perfectly in a window. The food is just the tip of the iceberg. In Jakarta’s cookie-cutter culinary trend, Hadi and his team bring a warmth and hospitality that gives 99 its authenticity. The TV is loud and snowy. The greasy fan in the corner wheezes just enough to notice. The wastafel towel is oddly a bit too damp. There is a sign announcing the restaurant’s hours and take away service, but they only give the first three digits of the phone number. But that’s what gives 99 its charm. The team of 12 staff joke with one another, poking fun at each other’s weight and bumming each other’s cigarettes. It’s more like a family than anything else. Three of the other 11 employees have been with Hadi since 1999. The youngest of the team has been on board for almost three years. 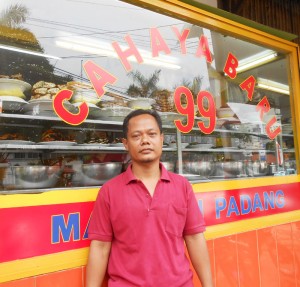 Hadi, a grown man with a family, still blushes when customers take the time to come up to him personally and confess to him how much they love the ayam bakar, jengkol and rendang that 99 serves. He looks sheepishly underneath his fingernails as he tries to put into words why he gets such great joy from working at what most would see as a thankless career.

“We know that the food here tastes just as good or better than the more expensive Padang places,” says Hadi, taking a quick break during the lunch hour rush, when the line can get up to four people deep. “But it gives us a sense of pride that we can keep prices low.”

Hadi used to work for Astra, as a welder, but there was no soul in it. Here at 99, Hadi and his team garner a sense of community from what they do. Everyone eats at 99, from the doctors across the street at Rumah Sakit Angkatan Laut, to the garbage collectors who roam up and down Jalan Benhil Raya, collecting bottle caps with magnets duct-taped to sticks.

As one of 12 members of the 99 team, Hadi eats, sleeps and breathes Padang – literally. 99 is an all-hours operation, which means that from time to time, Hadi is so exhausted when the restaurant closes that he sleeps upstairs where most of the food is prepared. But sure enough, he’s back up at 6am preparing dishes for when customers start to arrive as early as 7am. Now that’s love.