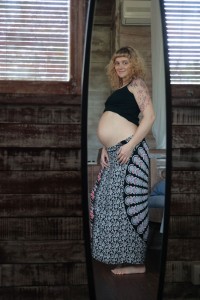 Elena Skoko was born in Croatia in 1991. When she was 18, she moved to Italy and became a singer and indie fashion designer. In 2007, Elena decided to move to Bali and set up a fashion business. But a chance encounter with a bluesman at Warung Ocha in Legian the same year resulted in a career change. Elena and her new partner Rob Bluebird started a band called Bluebird & Skoko, recording their first album Trust Your Mojo, Sista in 2009. In 2012, Elena published Memoirs of a Singing Birth about her experience birthing her daughter Koko in Bali. The family has done presentations in New York, Italy and Croatia where stories about the birth of Koko were followed by Bluebird & Skoko “singing birth” live sets. Koko is now three and a half years old and participates at conferences about the singing birth method, talking about her own birth and singing her own songs. Taking after her mother, the budding little performer loves the microphone and the audience.

When did you decide on a “singing birth”?
I did a lot of research on pregnancy and on the options I had for giving birth. The statistics just scared me, so I decided that giving birth outside of a hospital would be the best for us. I read some books and listened to CDs about the use of voice during labour and when the time came, I tried to apply some of those methods. They didn’t work well for me. Instead, I just impulsively started singing one of the songs Bluebird and I wrote. I discovered that singing made my labour pains easier!

Would a singing birth be appropriate for all women?
I would say so. Also for the fathers, the midwives and the doctors. We were both welcoming our daughter into the world with song. Bluebird and I were so very deeply connected at that moment. Besides, the use of the voice and of the mouth facilitates the dilation of the cervix, so the advantage is twofold — emotional and physical. Of course, a woman needs an appropriate place to feel at ease to sing, a comfortable place with loving, caring and trustworthy people who know how to help without any impositions. It doesn’t have to be a mantra or a specific vowel or Mozart. It can be any song that means something to the parents. 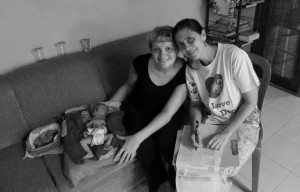 Why natural birth?
I opted for natural, unmedicated birth which could be in any position, any place and with anyone I felt comfortable with. I gave birth to Koko in a birth tub at the Bumi Sehat birth centre. It felt so good to be in warm water while in the late stage of labour. But I didn’t decide everything ahead of time. I just made sure that we could make any of our choices when we needed to. And guess what? Although I felt pain, I never suffered and the overall experience was genuinely joyful. There were even pleasurable sensations. I was in love and my body felt sensual bringing new life to the earth.

How did you find Yayasan Bumi Sehat?
I consider myself lucky to have met Ibu Robin Lim. A friend gave me her number, and from the start I knew I had found the right person for us. She was already practicing every method that I might desire for my birth plan, including lotus birth. Every time I would visit Yayasan Bumi Sehat for a check up, I would see the glowing healthy faces of all the new mothers. Even though it was a busy birth clinic, the atmosphere wasn’t noisy or rushed, but peaceful as if birth was a normal part of everyday life, as it should be.

What is a lotus birth?
My daughter had a lotus birth, which means the umbilical cord was not severed. I thought it would be complicated to care for the baby with her placenta still intact, but it turned out to be the most natural thing to do. Her navel was free in three days without any irritation or infection. I also used our placenta as a postpartum remedy. The placenta contains “love hormones” such as oxytocin that help with breastfeeding and “baby blues” (post-partum depression). But the major benefits are for the baby who receives one third of her blood that has been left in the placenta some time after the birth if her cord is not cut. In this blood is her first life supply of iron, nutrients, stem cells and plenty of oxytocin that help her feel happy to be a newcomer on earth and to bond with her parents. 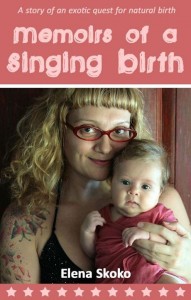 Tell us about your book Memoirs of a Singing Birth?
It was first published in 2010 and is now available on the World Wide Web, both in English and in Italian. The interest in unmedicated birth, singing birth and lotus birth is growing outside the niche. Recently, I talked about orgasmic birth at Huffington Post Live. My best costumers are doulas, new birth professionals who offer services of loving support for the mother and the family both during and pregnancy. I receive great feedback from readers who tell me my book has changed their perception of birth.

Any future plans?
I’m planning my own workshops where mothers and couples are able to prepare for a singing “artistic” birth, starting with the awareness of their own bodies to the ability to freely use their voices in the acceptance of the beauty and the beast that are part of our own human nature as well as childbirth. The more I share our story, the more I realize how much the world needs to hear positive birth stories to change the often traumatic experiences in childbirth that result from an over-medicalized way that birthing is practiced in many countries.

How may readers get a hold of a copy of your book?
Memoirs of a Singing Birth can be purchased at Earth Café, Bali Yoga Shop, Yayasan Bumi Sehat and at Ganesha bookstores. People may also order the book on Lulu.com and Amazon or download a digital version at Smashwords.com.