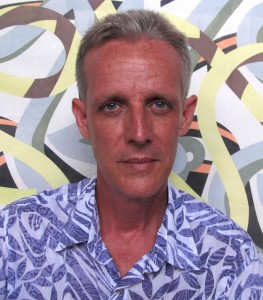 For half a decade Bruce Granquist travelled the hills, valleys and back roads of Bali on an old Honda 200cc making sketches, jotting down names and correcting and upgrading photocopies of old topographic charts made by the Dutch in 1928.

Man and machine were embarked on an absorbing and meandering mapping project, covering all of the island’s road systems, from the volcanic mountains and deep river valleys in the centre to the gentle alluvial plains in the South. Working in his spare time in between other projects, his task was made all the more difficult because this was before there was Google Earth, access to detailed charts or any other reliable base maps.

The arduous labour of love, rendered entirely in watercolour, was finally completed and self-published in the USA in 1999, the first large format detailed two-dimensional four-colour pictorial topographic map of Bali, the best obtainable representation of Bali’s marvellous terrain features.

Exploring Bali’s hinterlands was in Bruce’s DNA. Born in a small town called Waukegan close to Chicago in 1958, he was drawing before he could walk. Since 1978, Bruce has worked as a freelancer with publishers on a project-by-project basis. At last count, he has contributed art, line drawings, maps and illustrations in a total of 24 books. Bruce has also developed a small book distribution company based in Bali.

Bruce, did you study art?
I studied art at three different colleges, finally earning an undergraduate degree after several unsteady and circuitous years. My father was afraid I would not be able to support myself exclusively as an artist, so following his wishes I got a general education with a major in art. As it turned out, he could never know at the time how diverse my work would become and how far I would travel in my life.

Why did you settle down in Bali?
I studied the Borobudur in college, so a quest to see that incredible monument was the reason for visiting Indonesia for the first time in 1986. I always assumed that I would settle in nearby Jogjakarta, but as it turned out, while in Ubud one night I saw a Baris warrior dance in the rain. The effect of that performance was so powerful that I totally changed my plans, left Java and moved straight to Bali.

What are the best things about living here?
I love the feeling that the day to day activities of life run smoothly, following well established patterns, while at the same time there is a feeling that everything is about to go completely out of control. This teetering balance is of constant fascination to me and has inspired countless paintings and drawings.

Is it easy making a living from art?
I’m involved in everything related to books and publishing. I consider myself mainly an illustrator, but I also create and publish maps, design and publish books, research and write articles, import books and distribute them. My combination house/studio/storeroom is crammed with stacks of books, charts, and rolled up paintings and illustrations. Something in print is always within reach!

What was the first book you worked on?
A guidebook to Thailand in the early 1990s in which I contributed city maps and architectural illustrations. It was quite a challenge. I had stretched the truth a bit with my employer and actually had no experience whatsoever doing these types of illustrations. The illustrations were easy, but the maps were by far the most difficult part of the project.

What kind of illustrations do you do?
Most of my illustrations are about natural history and architecture. I specialize in mapmaking, though I have not studied cartography formally. My grandfather worked for Rand McNally. When I was a boy, I marvelled at the atlases that he’d bring home. But maps are challenging – I put prodigious effort into learning how to draw them well. Now maps have become the most satisfying type of work I do. With its amazing landforms, mapping Bali was a cartographer’s dream.

As a book agent, how many publishers do you represent?
I have two main suppliers, one in Singapore and one in London. Between them I have access to dozens of publishers and thousands of books. I often go to Singapore on book buying trips. I purchase stock there, ship the books by boat to Jakarta and then take them overland to Bali. I bring the books to about 10 independent retail bookstores around Bali, usually selling them on a consignment basis. If they don’t sell after a few months I either look for a better venue or sell them at a discounted price.

Does bookselling have a bright future in Bali?
The book business has become very bewildering and complex. This is especially the case now with the rise of e-books. Even experienced and venerable booksellers are scratching their heads trying to predict what will happen in the book business in the future. 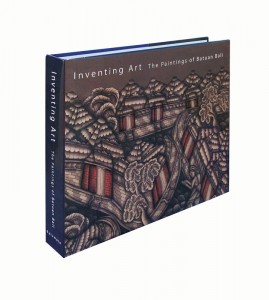 What is your latest project?
I just self published an art book called Inventing Art: The Paintings of Batuan. It took three and a half years to research, write, design and print this book, the most complex yet engaging project I’ve ever done. It has recently arrived in Bali from my printers in Singapore, and I’m just now beginning to promote and distribute it throughout the world.

What’s the book about?
The painting tradition of a small village just south of Ubud, which basically started in the 1930’s and is still going strong today. The book’s purpose is to demystify the ‘foreign” feeling of these paintings, to make them more accessible for people from outside Bali to understand. Though Batuan paintings are often filled with mysterious imagery, there are many aspects in them that are easy to understand and appreciate. The book tries to remove the “us and them” aspect of these wonderful paintings and present them simply as good art, able to be appreciated by anyone with a patient and sensitive eye.